The Music Lover’s Guide to Record Shops in Leeds 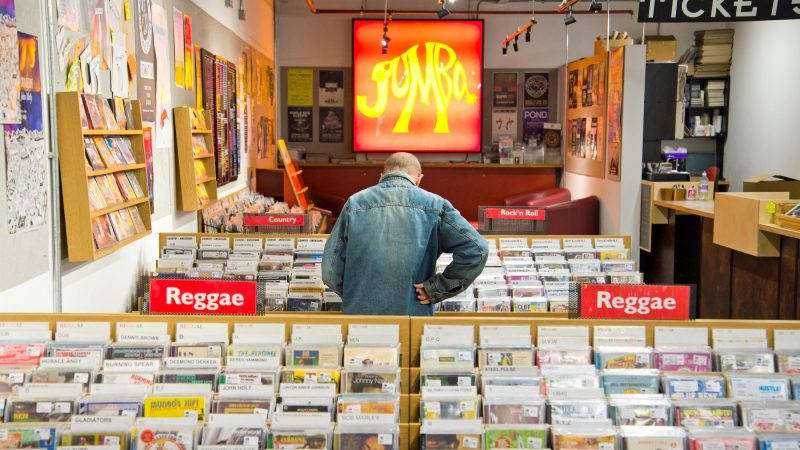 From rock to soul, dance and hip-hop, if you’re ever in need of some musical retail therapy, these Leeds record shops are just the ticket.

It’s been a rollercoaster ride for independent record stores – the rise of CDs, downloads, online shopping and streaming have each tolled a death knell for vinyl slingers. But there’s a resurgence going on and the number of music lovers who still put their trust in these hubs of audible joy is ever-growing. These are the places that allow generations, old and new, to find their next favourite act or (re)discover the glories of yesteryear. Next time you’re in Leeds, make a beeline for the city’s independent record shops for an experience like no other. 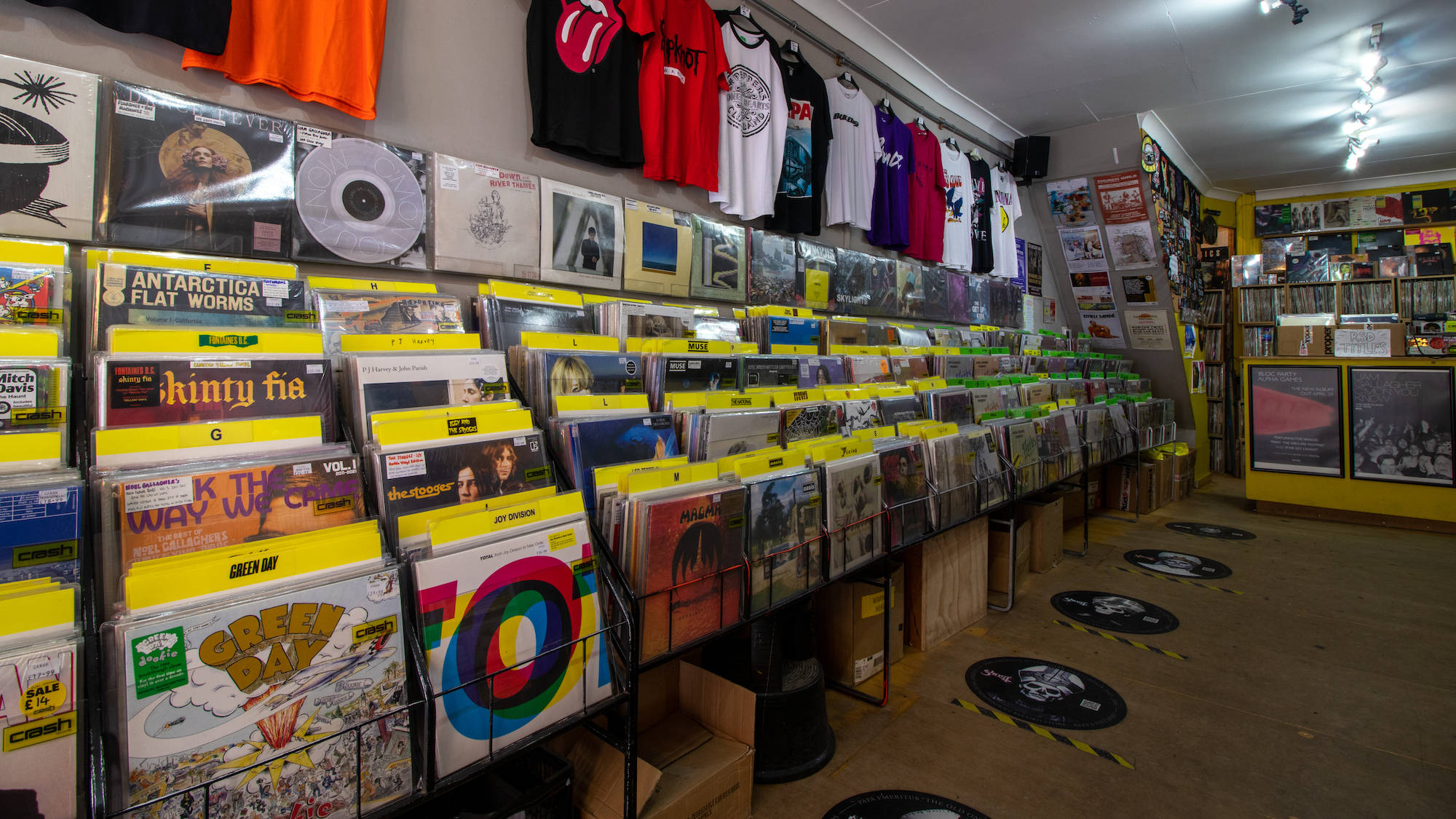 It has been the beating heart of Leeds’ music scene since it first opened on Woodhouse Lane in 1985, now Crash Records is an intrinsic part of the fabric of The Headrow and well into its fourth decade of supplying the unmissable sounds of the past, present and future. In-store appearances and merchandise are part of their esteemed offering but it’s the tangible, audible treats where they truly excel.

Crash Records specialises in indie, alternative and metal artists on both vinyl and CD, with racks of both lining the walls. Into hip-hop or film soundtracks? You’ll find plenty of both in there too. Get ready to spend more than a good few hours going through their vast offering to find just what you’re looking for, and maybe a few things you weren’t. Want to see your new favourite act live in Leeds? They sell a bunch of tickets to gigs and festivals at venues across the city and Yorkshire. 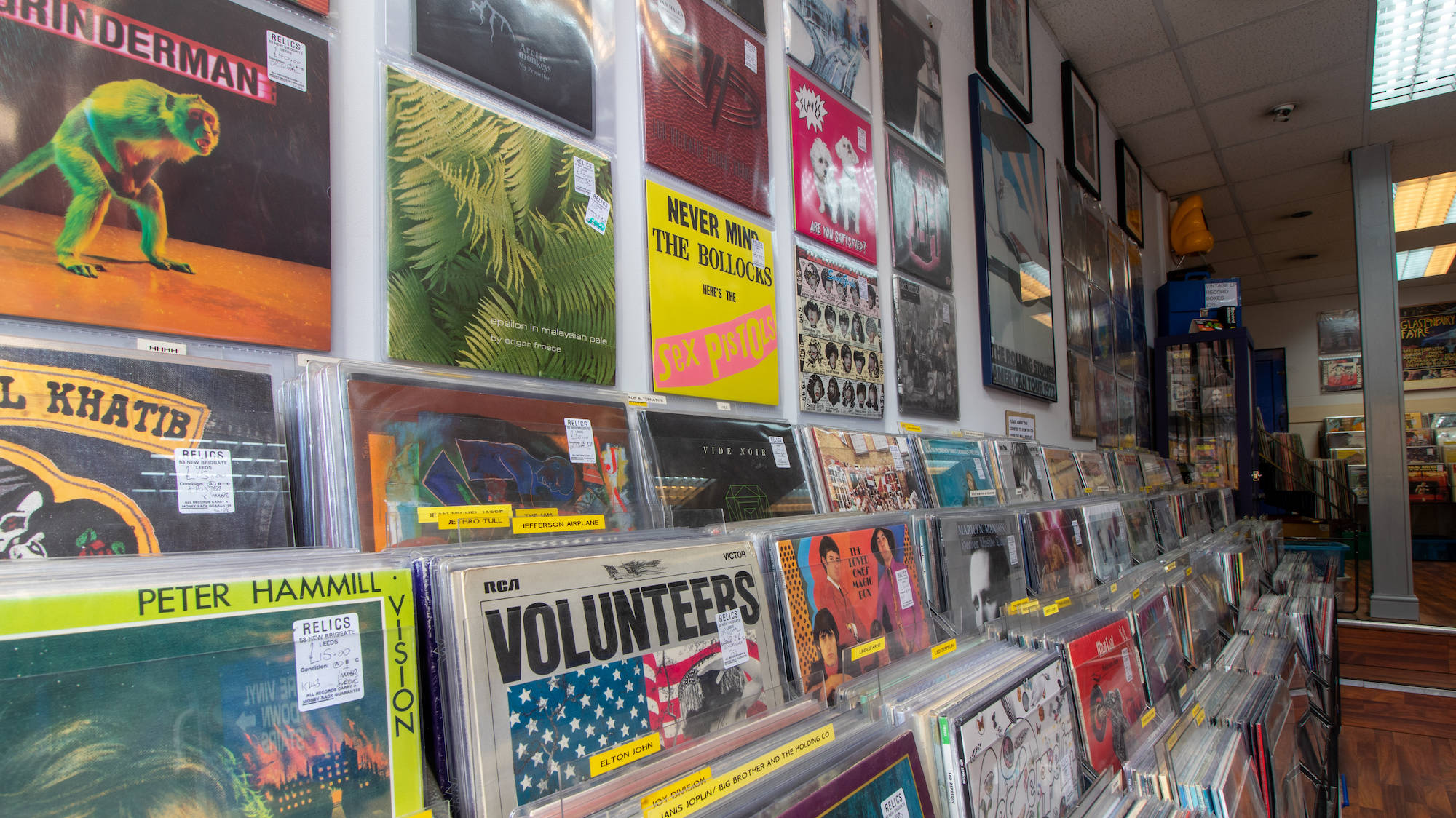 While new releases are all well and good, sometimes you just need a record shop that specialises in the best bits of yesteryear. That’s where Leeds staple Relics Records comes in. It’s a veritable pandora’s box of vinyl wonders, home to racks upon racks of original pressings of classic records, alongside reissues and second-hand gems of recent releases since 1991.

Spread across two floors, they’ve managed to chart the journey of popular music from the 1950s up until the present day, on CD as well as vinyl. You won’t find it hard to part with your well-earned cash here, whether you’re looking for rare jazz albums, classic rock albums or modern hip-hop 12″s. There’s piles of soul, metal and dance too. Top tip – if you’re looking for a well-priced rarity, dig into the special box on their downstairs counter. 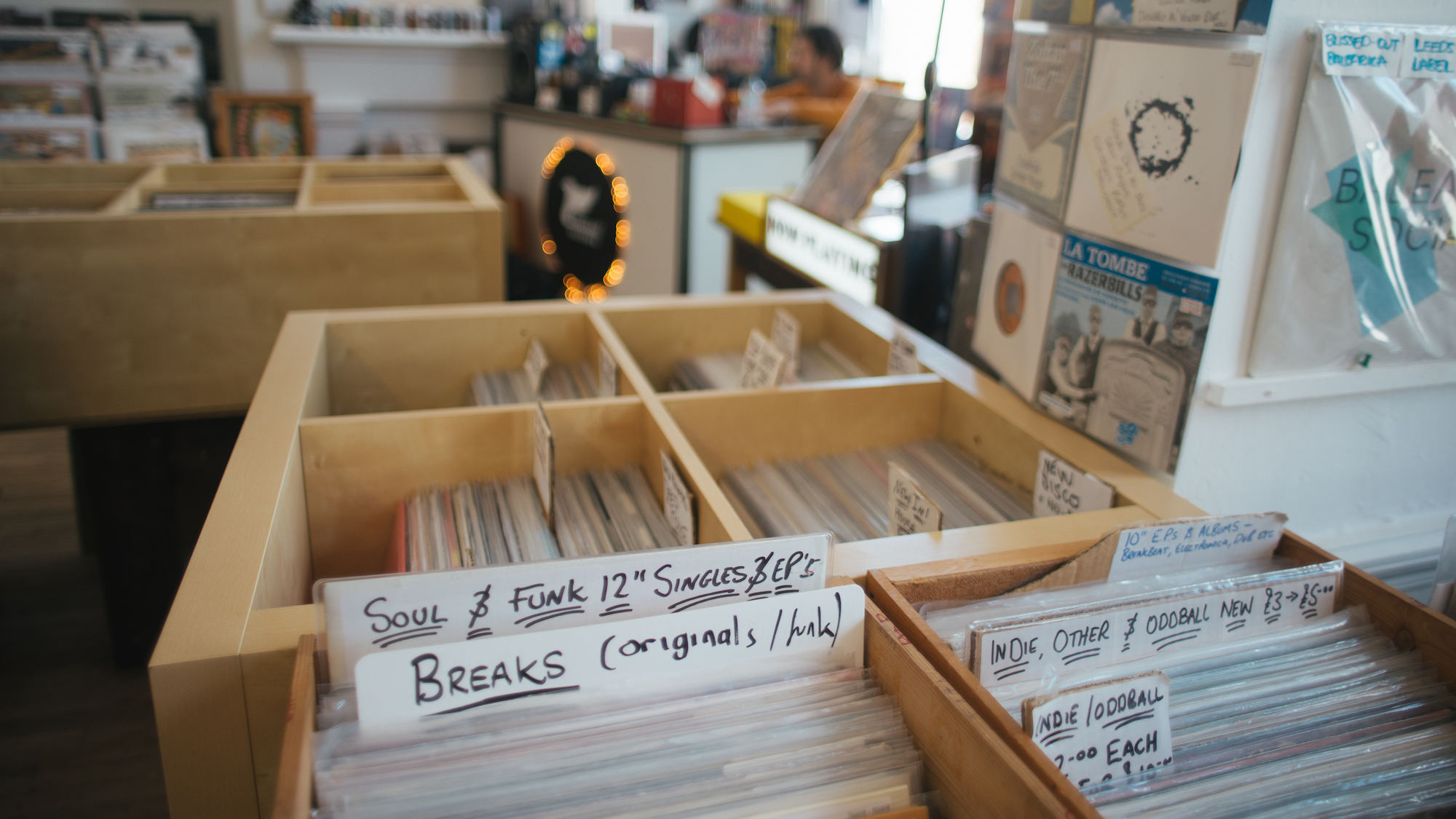 You’ll find Released Records on the top circle of Leeds Corn Exchange and it’s a treasure trove for vinyl lovers in Leeds. Amidst the racks-upon-racks of records, this cool little music-loving hidey-hole is decked out in vintage armchairs, piles of music magazines and a set of decks for DJs to come in and soundtrack your flicking.

And what flicking you can do here – there’s stacks of wax, old and new, to comb through. They specialise in underground, left-field sounds across dance, rock and hip-hop, but don’t be surprised to see albums by composers like Verdi next to EPs from rap heroes like Dilated Peoples and soundtracks from 60s films by the likes of John Barry – it’s eclectic as they come. If that’s not enough, you can even pick up cool cuts from from their own record label, home to the likes of Chris Dawkins, Meraaki and Jorgie. 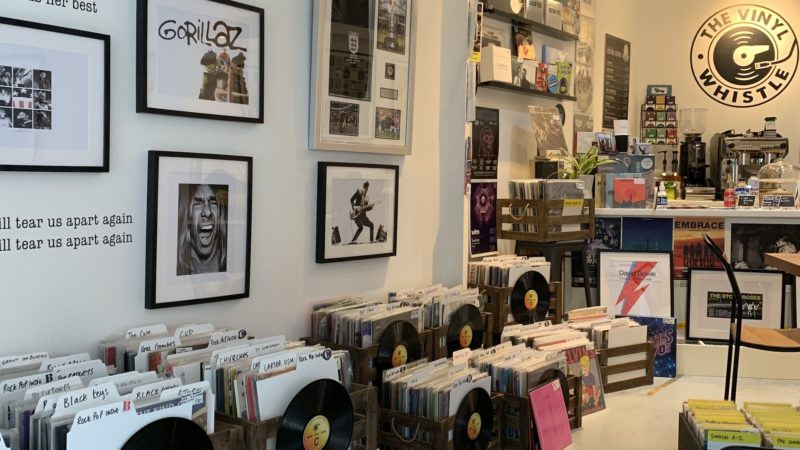 You might recognise the proprietor of The Vinyl Whistle – Jon Moss is a former Premier League referee who opened this Headingley record shop in his spare time away from the pitch after initially starting out online. It’s now his post-reffing focus and he’s created an incredible shop for music lovers in Leeds, selling beer, coffee and cakes alongside the latest sounds from the underground.

Before you fill your belly, fill your record shelves. It’s split across two floors and every section is heaving with incredible finds, for both new and second hand singles and albums. It’s great for indie lovers, with plenty of LPs and rare 7”s from the 80s, 90s and 00s. You can also find everything from hip-hop to jazz as you make your way from box to box. Before you call for full-time, check out their collectables section – it’s pricey, but home to many rarely-seen pressings.

This is an independent record store with a difference. Norman Records has been around in some kind of fashion since 1995, and for over 25 years they’ve been one of the most popular records shops in Leeds and beyond. The funny thing is, it’s completely online. Their HQ is at Croydon House in Holbeck, but it’s only open to collect orders you’ve already made.

They specialise in the best and often the most interesting music they can get their hands on, mostly on vinyl. There’s not a shop with racks to spend hours in, instead there’s an easy-to-use website, where you can find releases you often don’t see in other shops. And if you’re not after anything in particular, just looking for something new to listen to, take a look at their record reviews – there’s no beating around the bush, they’re full of expertise and plenty of tongue-in-cheek humour. It’s online shopping, made interesting. 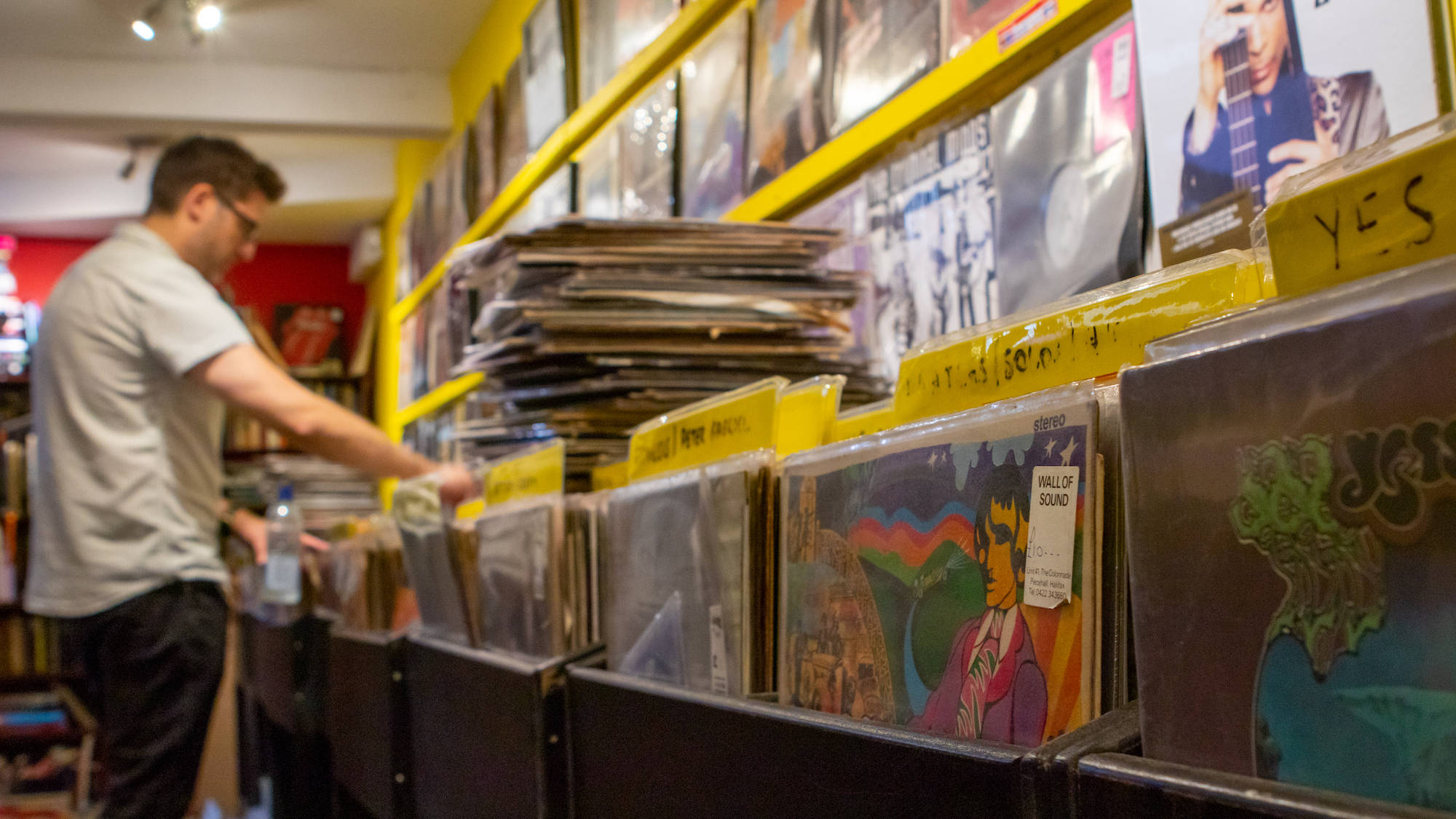 Crash Records isn’t home to just one vinyl shop – delve deep into their basement to uncover a true crate digger’s dream. Wall of Sound are second-hand specialists, moving from Huddersfield to Leeds in 2016, who have created a music emporium you’ll want to set aside a good few hours to visit. Nearly every surface is covered in some kind of musical brilliance, with plenty of surprises to seek out.

Their collection spans the past 60 years of music, almost tracking the rise of pop one record at a time. Classic rock sits alongside blues sits alongside soul sits alongside indie sits alongside punk sits alongside hip-hop sits alongside reggae – get the picture? It’s the perfect place to go digging for that long-lost treasure and if you can’t find it, just ask, as you never know what help you might get. There’s CDs, DVDs, books and music memorabilia aplenty to boot. 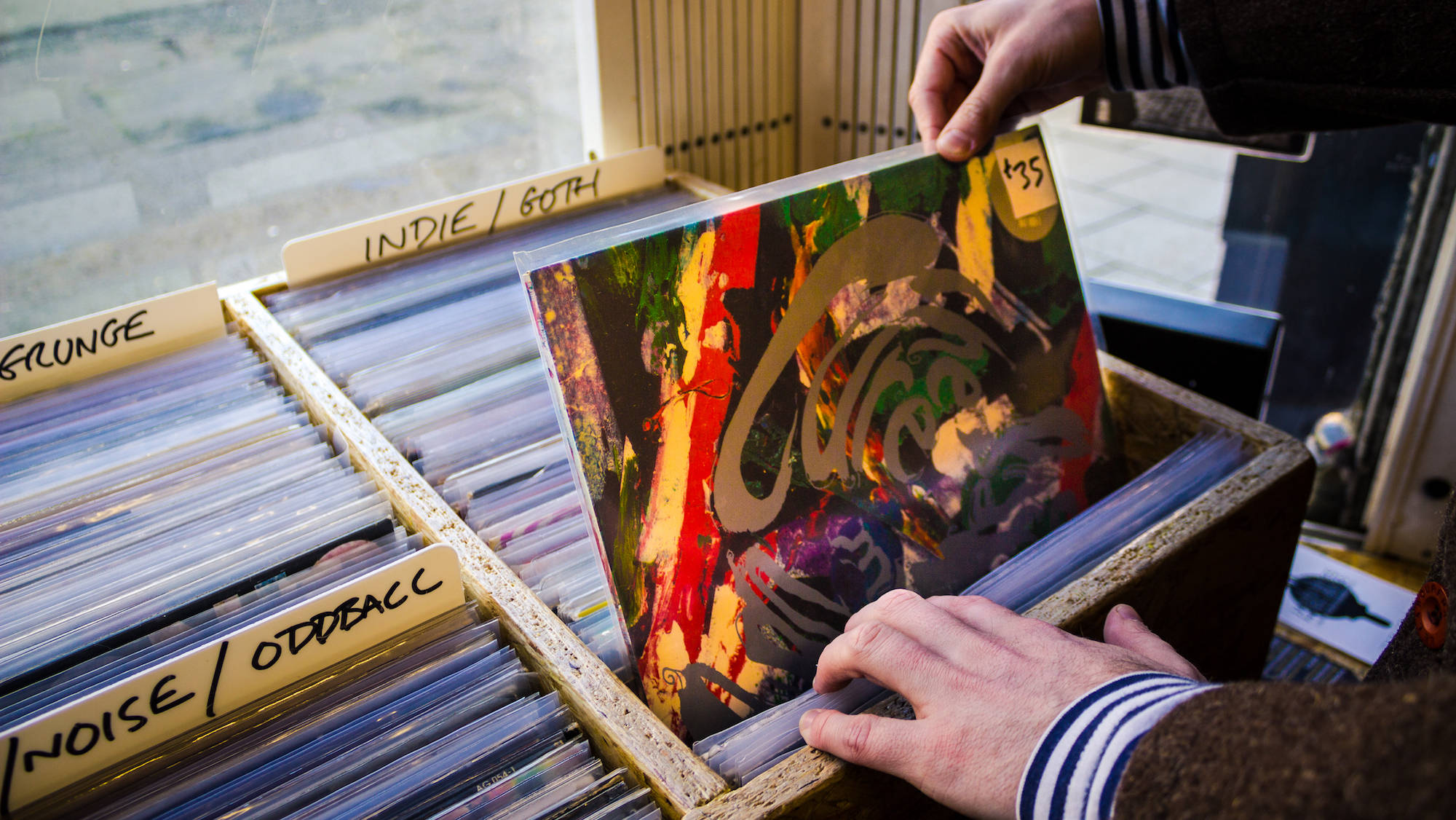 Chris Coulthard is a record dealer extraordinaire with the experience to back it up – he has been selling records at fairs since 2003 and has previous experience at Vinyl Tap in Huddersfield, but it wasn’t until 2017 that he opened his own shop. Noiseisforheroes is tucked away down the bottom of Great George Street and it offers a little something for everyone in Leeds. It’s not a massive record store by any means, but it aims to cover as many genres as possible.

You can spend a good, long while trawling through the racks here. They have very healthy selections of rock, metal and indie, with arguably the best punk offering in Leeds. But that’s just the start – there’s plenty of hip-hop, soul, dance and soundtracks, while the wall and counter-top boxes are chock full of super-rare finds and singles. Can’t find what you’re looking for? Chris is always there to help. 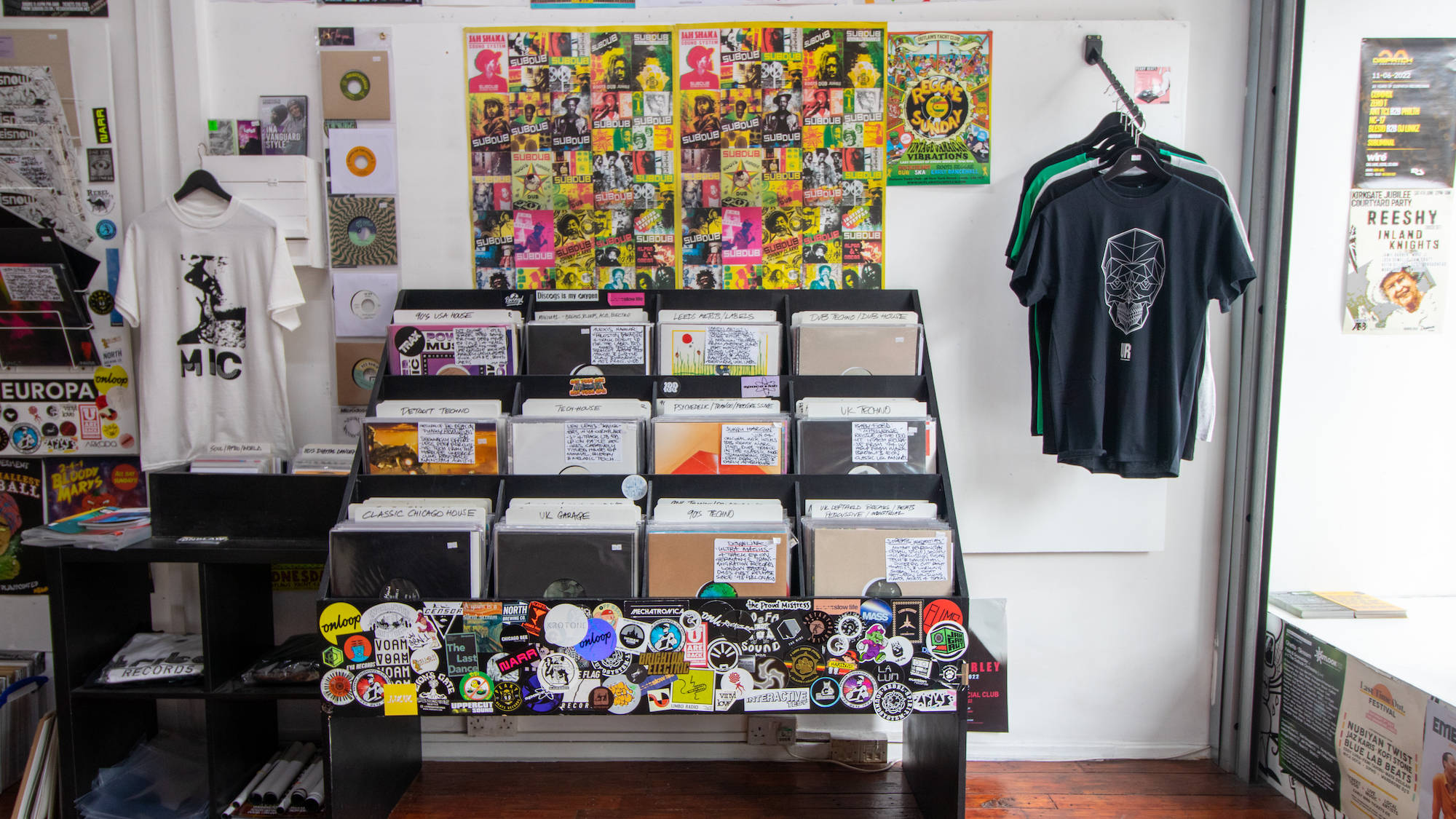 After a short hiatus, Tribe Records is back. It originally opened back in 1995, and quickly became the place to find dance music in Leeds, before closing in 2013. Simon Scott runs it, and he’s teamed up with Alex Theodossiadis and Mike Greenwell to make it one of the best record shops in the city – they now sling sounds out of their Kirkgate shop.

This modern incarnation of Tribe is more of what made people fall in love with it in the first place. It’s the go-to for any and all kinds of club music, from garage, dubstep and dancehall to house, techno and minimal. They’ve always got new tunes coming in, so if there’s something you can’t find or you just want a few recommendations, you need only ask. Looking for tickets for big dance nights and festivals? This is your one-stop shop.

First opening in 1971, Jumbo Records is officially the oldest record shop in Leeds. It’s moved from Queen’s Arcade to Merrion Centre to St Johns in the time since, but now it’s back in the heart of the Merrion, dishing out the finest beats around. This is a haven for vinyl addicts, as you flick through huge swathes of rock, indie and pop, but that’s not all they’re famed for.

Their racks cover the whole spectrum of dance, soul, jazz and soundtracks too, as well as boasting a very healthy 7” single, CD and local artists section. It’s not just sounds – you can pick up gig tickets for nearly all Leeds gigs here, and you can even read all about it with a hefty music book and magazine section. And if that’s not enough, keep an eye out for their in-store shows held in their own dedicated live music space. 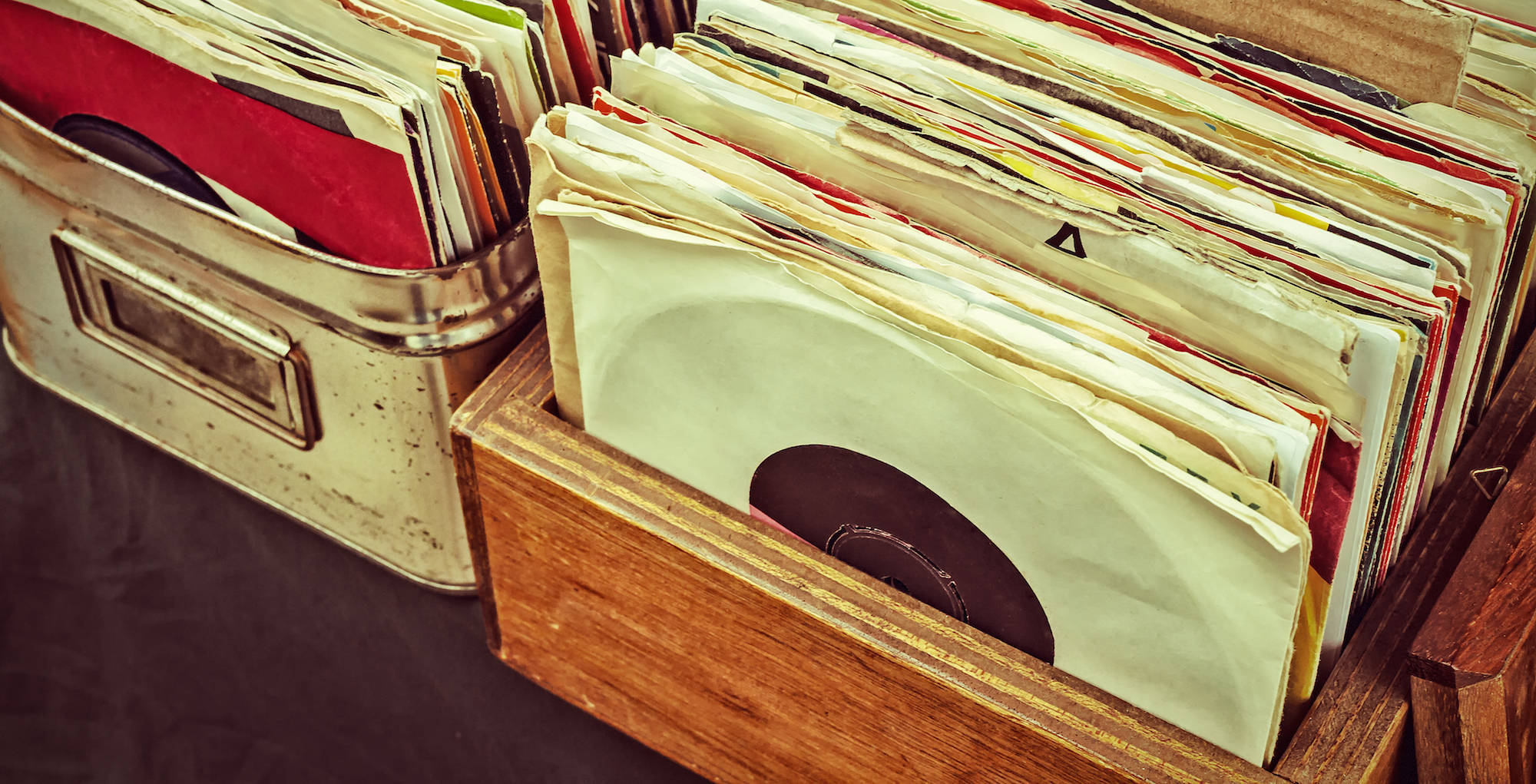 Ian Brookes has spent the best part of a decade running around record fairs all over the UK, whether close to home at Leeds Corn Exchange or in far-flung exotic places like Manchester, London and Norwich. But in 2016, he gave up the day job to set up Vinyl Fixx in the Leeds suburb of Armley. He continues to pop-up at record fairs, but you can visit his shop from Monday to Saturday for vinyl digging.

You’ll find all kinds of pre-loved records here, it doesn’t matter what genre you like, there’ll be something present for everyone. However, if you’re a bit of an indie fan or rock lover, there’ll be envious amounts of albums, old and new, rare and familiar. It’s not just records that makes Vinyl Fixx one of the best music shops in Leeds – Brookes often comes across vintage posters and memorabilia on his rounds, so if you’re after something extra special, pop your head in, and who knows what you’ll come out with. 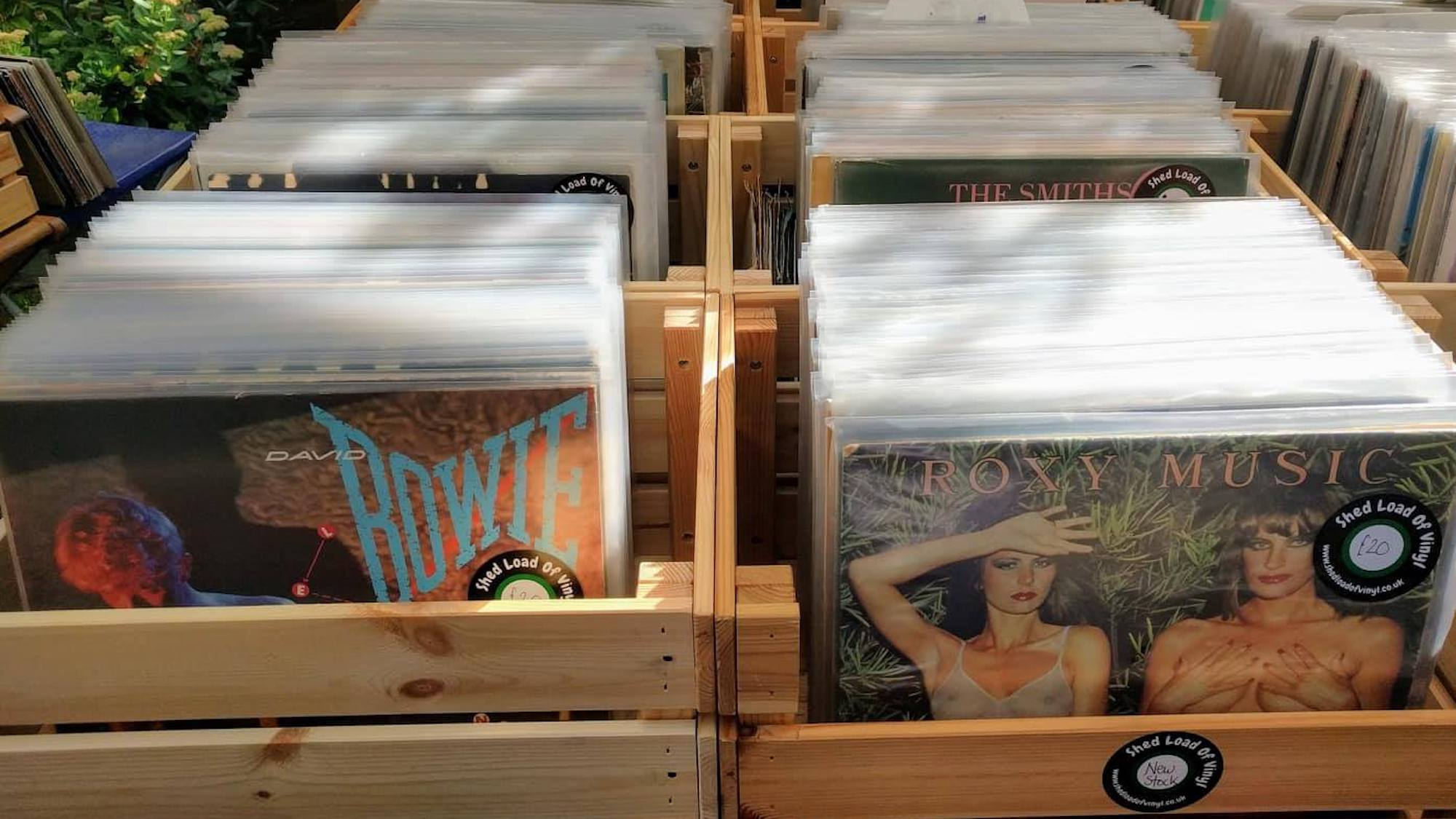 Who said a record store has to be in a shop? Mick Carter’s Shed Load of Vinyl can be found in a specially-converted shed at the back of his Guiseley home. He’s covered the walls in vintage music posters and kitted it out with racks and racks of vinyl, as well as a sound-system you can play your records on before you buy – he’ll even furnish you with a drink while you browse.

He only opens up his shed on occasional Saturdays and Sundays, as well as hosting pop-up events at bars and cafes nearby, so keep an eye on the Facebook page for updates. But when it is open, this is a temple of pre-loved records. The bulk of the offering covers classic rock, punk and indie, but really, that only scratches the surface of what’s on offer, taking you from soul to jazz, hip-hop to dance, depending on what collections he’s recently picked up.