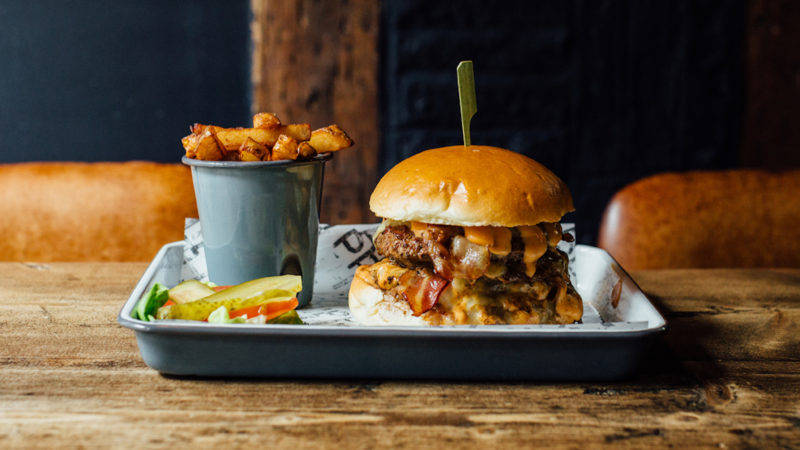 Even in the midst of a pandemic, we’ve welcomed 40 new arrivals to Leeds over the past twelve months. But now we’re looking ahead to see what’s in the pipeline. Believe it or not, there are 21 new additions preparing to open their doors in 2021 – and we’ve got the lowdown on all of them. So without further ado, let us introduce you to your new favourites. After a series of false starts over the years, the first permanent House of Fu restaurant will open in Leeds city centre at the start of 2021. Once known as Fu-Schnikens, it’s run by Ox Club’s Ben Davy and has wowed diners at various pop-ups, supper clubs and street food markets across Leeds. They’re best known for their incredible bowls of steaming ramen, but that’s not all you have to look forward to as they’re doing a menu full of Japanese classics.

House of Fu will open on The Headrow in early 2021.

Flight Club’s ongoing transformation of the former Shooters and Smokin’ Bar complex will finally be complete in 2021. Their darts bar concept has been a success on both sides of the Atlantic and now it’s coming to Leeds. There will be dart boards everywhere – expect fast-paced multiplayer games, modern dart technology and instant scoring systems to make tallying up points a breeze. While you’re there, you can enjoy craft beer, cocktails and burgers.

Simon Rimmer from Sunday Brunch is one of the most famous TV chefs in the country and he’s planning to open his first Leeds restaurant in 2021. He’s already got two popular restaurants in Cheshire and Greater Manchester, but this is the first time he’s ventured across the Pennines. The restaurant’s name, concept and location are yet-to-be-confirmed, but he has hinted that it may involve freshly made pizza.

Simon Rimmer’s first Leeds restaurant is set to open in Leeds in 2021. Decathlon is one of the biggest sports shops in the world and its long-awaited arrival in Leeds will happen in March 2021. It’s taking over the old BHS unit in Trinity Leeds to create their Northern flagship store. Once it’s open, you can pick up everything from running shoes to cycling gear, swimwear and camping equipment. Alongside the store, they’re installing a state-of-the-art bike, ski and racket servicing centre. Leeds Dock owners Allied London are opening a cool new bar and restaurant on the waterside with operators WePop. The Canary will be built from a series of old shipping containers, painted in yellow and black, as a nod to the area’s role in the industrial revolution. There will be a ground-floor restaurant, a first-floor bar and a rooftop terrace. Expect a never-ending flow of craft beer, alongside cocktails and wine. The first Brew York bar outside of York is opening on New Briggate at the start of 2021. You’ll have 20 keg and cask lines to choose from, pouring their own core brews and one-offs, as well as a host of guest beers from their favourite breweries. You can even try their famous Hoptail beer cocktails. Food comes in the form of YUZU Street Food, who are taking over the kitchen to offer Asian-inspired favourites like bao buns, dumplings and curries. North Brewing Co. has a new home at Springwell. They’ve taken over a former tannery and steelworks on the edge of the city centre to house their brewery and taproom. They will now be able to brew 2.8 million pints a year, while bringing their whole operation under one roof. The new 500-capacity taproom will be at its core, with a cool, industrial-chic bar that will open as soon as restrictions allow.

Son of a Bun Not content with just opening one new burger joint in the past 12 months, Son of a Bun are adding a city centre venue to sit alongside their Pudsey base. They’re already delivering to the city centre on Uber Eats, but they’re making that move permanent in the first few months of 2021. They’ll confirm where they’re opening early in January, but when they open, you can look forward to juicy burgers, sticky wings and loaded fries.

Son of a Bun is open for delivery now and in Leeds city centre in early 2021.

Seven Brothers is a Salford-based brewery that’s been going since 2014. They’ve already got two bars in Manchester, but now they’re opening their first across the Pennines with a new bar here in Leeds. You can try their full collection of beers, from classic pales to stouts, but that’s just the start. They’re known for their creativity, so get ready for unusual brews made with wild ingredients like Kellogg’s breakfast cereals.

Seven Brothers Beerhouse are opening in Leeds in 2021. Seven Hills is an independent bar, named after the seven hills Morley is built on and it’s opening on Brunswick Street next year. It will have something for everyone, with craft beer on keg, cask and in the fridges, as well as a handpicked collection of gin and a small menu of classic cocktails. Their takeaway service has started already, but they’re not opening fully until 2021. German Doner Kebab originally planned to open five stores in Leeds in 2020, but the pandemic put paid to that. They are, however, still plotting their arrival and their first restaurant will open in the city centre. They’ve earned rave reviews across the world for their proper doner kebabs, which they make using premium lean meats. Try The Original, a tasty combo of doner meat, lettuce, onion, tomatoes, red cabbage and three secret sauces. Lake District-based Handsome Brewery will open its first permanent taproom in Leeds in 2021. They’re taking over the old fancy dress shop opposite the University of Leeds. The venue is being completely transformed, as they rip it all out and build it back up to create a pub with a traditional-yet-modern feel. Once open, you’ll be able to try their core range, including the FKR Lager and the Strange Pale Ale.

Handsome Brewery will open on Woodhouse Lane in 2021. After a trial run at Trinity Kitchen a few years ago, Fat Hippo fell so in love with Leeds that they decided to make the move permanent. It’s taken them a while to find the perfect venue, but now they’ve got it, on Otley Road in Headingley. This is a down and dirty burger joint. You can choose from either of their signature patties, beef or buttermilk chicken, which are then stacked high in a brioche bun – try the Peanut Butter and Jelly, which is as tasty and as messy as it sounds.

The Fat Hippo will open in Otley Road, Headingley in early 2021. Leeds Art Hostel was a huge success when it opened on Kirkgate in 2016, but when developers moved in, East Street Arts had to move out. Luckily, they’ve found a new space on New York Road, by their Patrick Studios HQ, and they’re planning to open in early 2021. They’ve refurbished a former presbytery building to create 12 bedrooms, an outdoor courtyard and a new dining and kitchen area. They are, of course, commissioning local artists to assist with the decor. The opening of Ready, Steady, Bake It was pushed back by the pandemic, but it’s ready to open as soon as Leeds enters Tier 2. If you’re a fan of The Great British Bake Off, you’re going to want to pay them a visit – it’s a competitive baking experience designed to pit you against your friends. You get your own baking station to create sweet and savoury baked goods before tasting and deciding who’s your star baker. Caboose is a new street food joint. It’s opening in an old warehouse in Garforth and will be home to two semi-permanent kitchens and one rotating kitchen, which will allow them to welcome an ever-changing line-up of vendors into their fold. Think burgers one week, poutine the next. It’s not just food though – they’re also building a craft beer bar, which will stock beers from the likes of North Brewing Co, Northern Monk and Magic Rock.

Caboose opens in Garforth in Summer 2021. After opening a hugely successful bar in Crossgates, The Assembly is opening a second venue in Garforth at the start of 2021. You can expect more of what they already do so well – they have a carefully curated menu of craft beer, wine and spirits, the latter of which is turned into delicious cocktails. Fancy a bite to eat? They’ll be serving charcuterie boards, bar snacks and cakes by Hannah’s Kitchen.

The Assembly is opening on Main Street, Garforth in early 2021. Hull’s favourite burger joint, Dope Burger, is coming to Headingley in 2021. They’ve won huge plaudits in their home town for their oh-so-dirty burgers, which come stacked high and filled with all kinds of goodness. Try the Fondue Burger, which is packed with oozy cheese, or go for the DFC Scotch Bonnet, which comes smothered in fiery chillies. That’s not all – they also serve vegan patties, hot dogs, loaded fries and milkshakes.

Dope Burger is opening in Headingley in 2021. The former Golf Bar near Granary Wharf won’t be empty for long because Canal Club is taking over in 2021. This day-to-night venue promises a menu of globally-inspired small plates and sharing boards during the day, which you can pair with creative cocktails. Later on, it will transform into a buzzing club-style venue, with DJs spinning popular dance, pop and R&B anthems until the early hours.

Canal Club is opening on Granary Wharf in 2021. They’re already teammates on the pitch, but now two Leeds Rhinos players are joining forces to open a speciality coffee shop in Oakwood. Prop Dominic Crosby and loose forward Luke Sutcliffe are in the middle of transforming an old interiors shop into the area’s newest cafe, just yards from Roundhay Park. The menu is still being worked out, but you can expect locally-sourced coffee and a menu of brunch favourites.

Posted by Project.doughnut on Wednesday, April 22, 2020

Project D has been charming the Leeds masses for a while now – they’ve been delivering doughnuts across the city since the summer. But now they’ve announced they they’ll be opening a permanent Leeds shop in 2021. They’re transforming part of their distribution centre in Hunslet into a doughnut haven where you’ll be able to pick up their famous Homer ring donut, alongside an ever-changing range of flavours.

Project D plan to turn their Pottery Fields distribution centre into a cafe in 2021.