Want to feast on fusion? Head to Oba Kitchen. 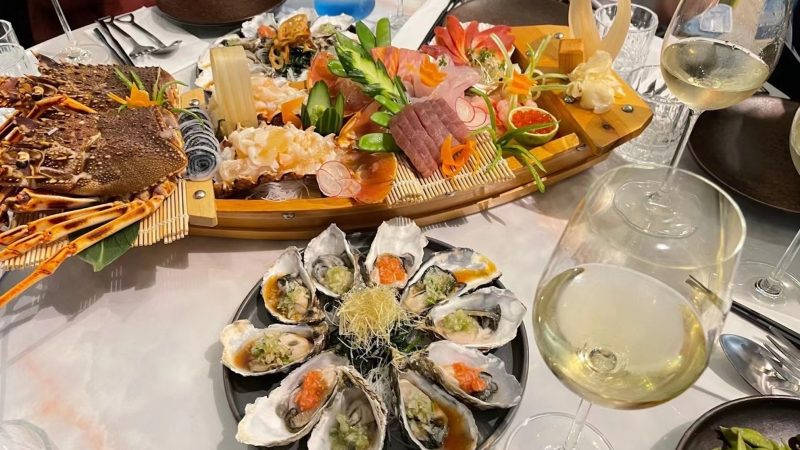 Traditional Korean dishes and a modern take on sushi are on the menu at Oba Kitchen.

This tempting new oriental opening comes from the same people behind the much-loved Hang Sing Hong food shop on Vicar Lane, also known as Taste the Orient. They’re taking their passion for the best produce and turning it into a casual restaurant, both with Oba Kitchen and its neighbouring sister restaurant, Mi’s Noodles. Intrigued? Keep reading…

With experienced chef Wei Wang at the helm – he spent time honing his craft in Japanese and Korean kitchens in London – the approach here is modern fusion. This doesn’t mean wild combos that don’t work, but instead, a marriage of traditional Korean food with interesting and delicious takes on sushi, all served up with signature cocktails. 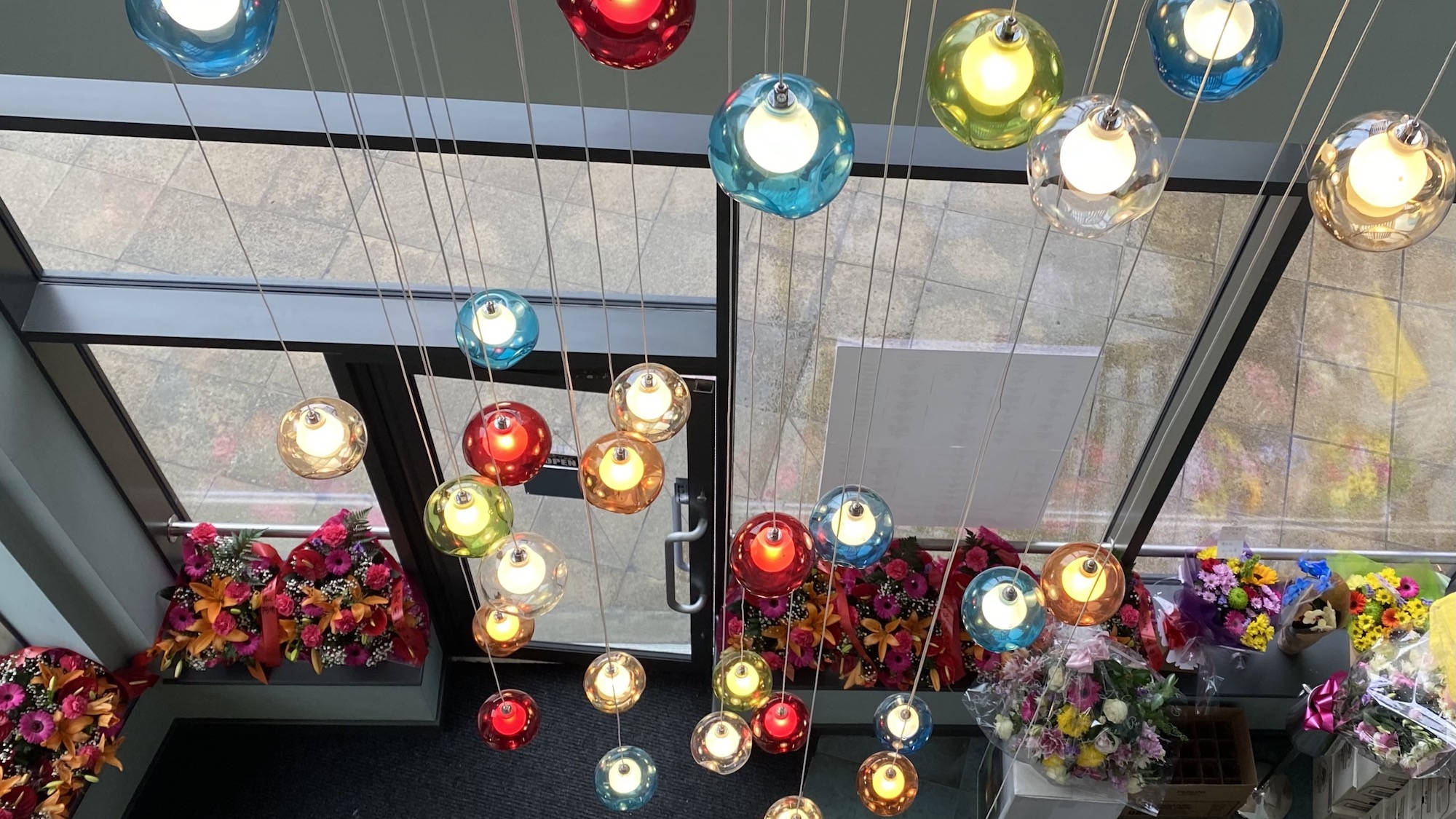 It creates a unique offering in the Leeds food sphere, something notably different to the Japanese and Chinese places already established in the city. Here you can start your meal with the traditional Korean dish of fermented cabbage, Kimchi, homemade, of course, or go for something a little more dip-able like gyoza dumplings, in both prawn and chicken form.

Whitebait dressed with cumin and chilli flakes further highlights the fresh approach, allowing you to mix and match cuisines. A Kimchi Tomato Soup is a true original, while Kang Poong Gi offers more familiar option for those who dine Korean – after all, you can’t go wrong with chicken and sweet chilli sauce. The owners were keen to let the chef explore. In the past, he’s specialised in Japanese cuisine, but he has a passion for Korean food. 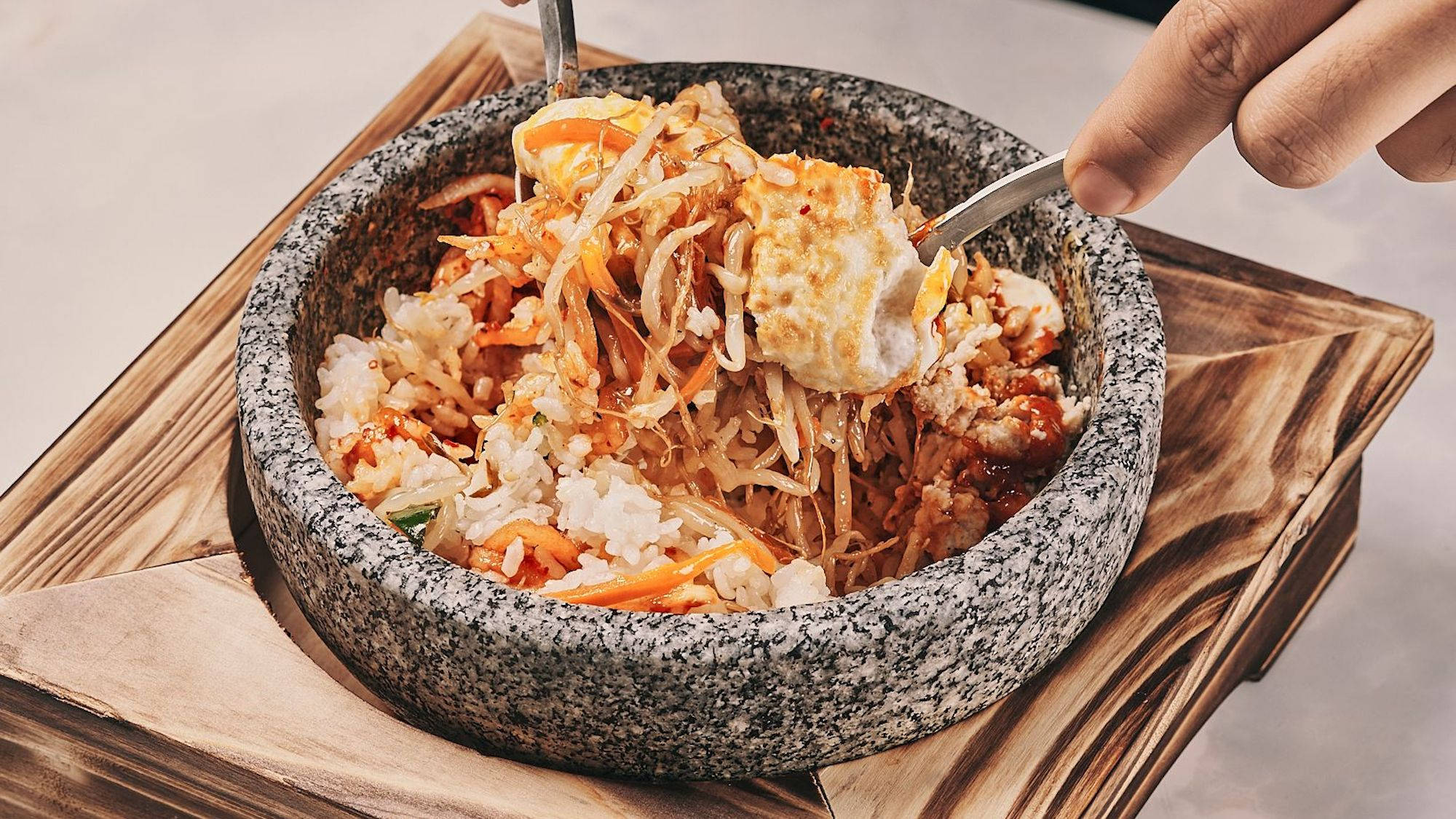 That diversity is also evident in the main courses, which tick many of the classic boxes – you’ll find stir fries, bibimbap, Korean pancakes and rice dishes nestled alongside more adventurous fare. Teriyaki or Katsu Curry might be ubiquitous in Leeds, but they’re delivered with panache – it’s the perfect quick lunch or pre-theatre bite.

Other dishes come straight from the fine-dining handbook – black cod in miso is their take on a Nobu classic, while king scallops are flambeed with brandy and paired with a creamy, spicy garlic sauce. How about fillet steak, Asian-style? Served with butter soya sauce, this rich and luxurious dish might just become your new favourite. 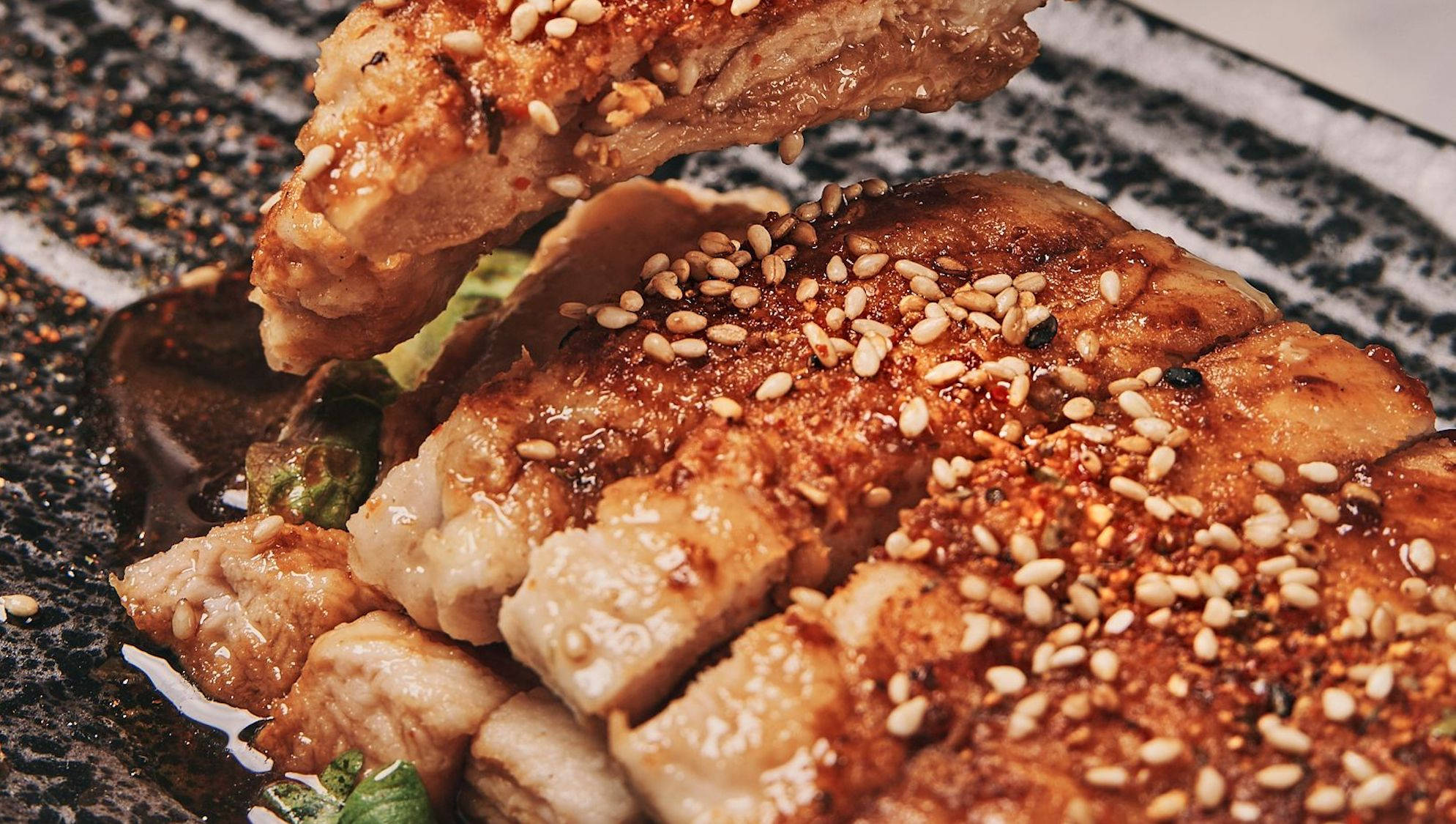 The true test of a Korean kitchen lies in the Bibimbap, the iconic rice bowl served all across Korea. Here it comes in minced chicken and beef varieties, arriving in a stone bowl adorned with rice, seasoned vegetables, Korean sweet chilli miso and topped with a fried egg. Feel free to spice it up further with a hefty glug of gochujang.

Those craving meat and fish won’t leave disappointed. There’s Unagi Donburi (fresh eel with Japanese sauce and rice) or grilled lamb racks heady with cumin. Which pork belly dish will you choose? The one with ginger sauce or the one stir-fried with kimchi? Heck, try both. And finally, there’s a beef steak wrap – sirloin with a truffle soy sauce. It’s delicious, naturally. 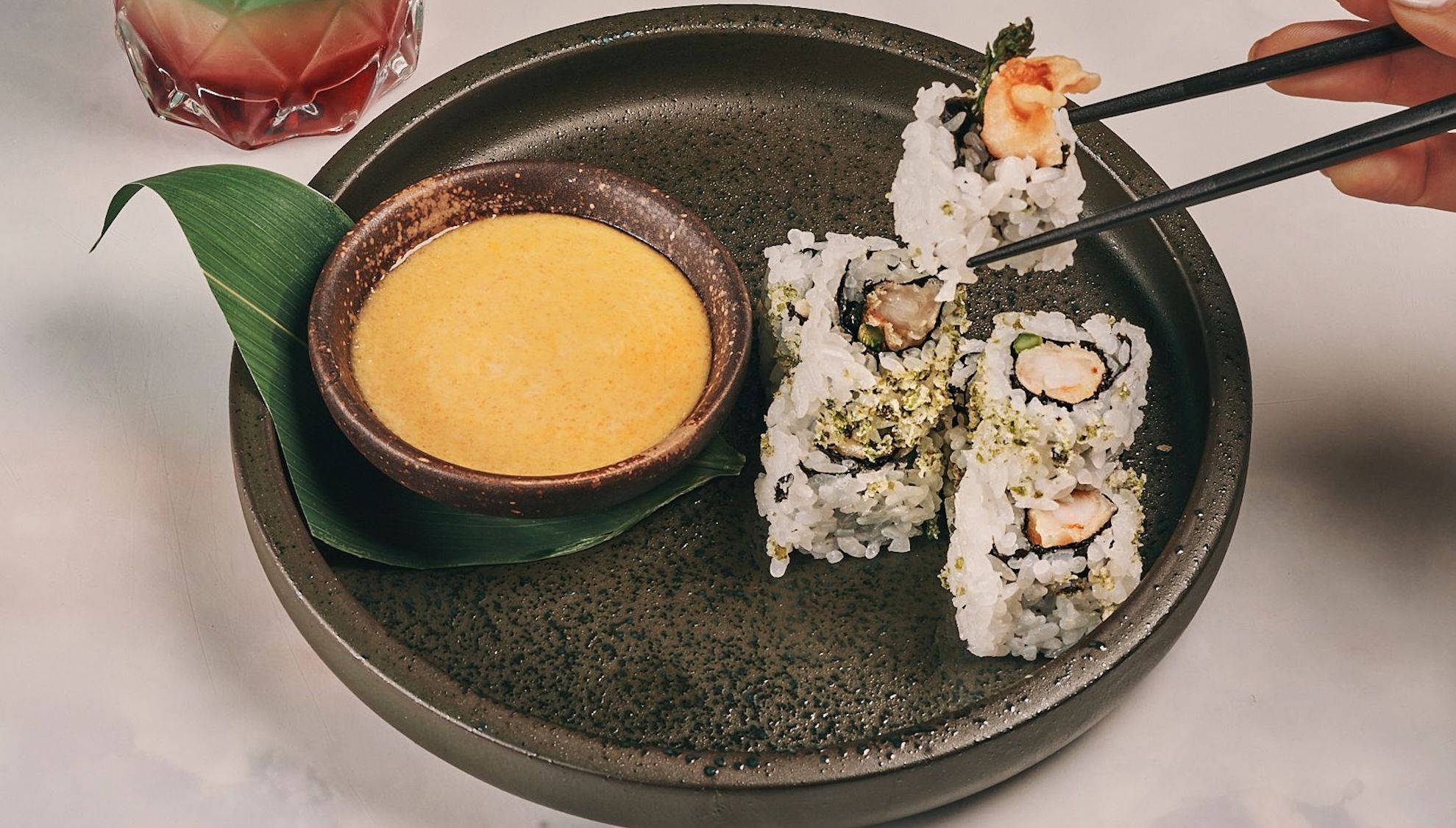 So far, so carnivorous, but in reality, but vegetarians certainly aren’t overlooked. In fact, 70% of their menu is vegan. Starters, for example, include Hikayako (soft tofu with ginger, spring onion and soy), along with vegan gyozas and Modum Namul, a healthy melange of Korean seasoned vegetables.

They have a magic way with tofu, something you can see in vegan mains like the Tofu Katsu Curry and Korean Steak. There’s a veggie Bibimbap and tasty Toppokki, a Korean rice cake with sweet spicy sauce. Still hungry? Try the vegan nigiri and cut rolls from the sushi menu. Red pepper with balsamic soy, yellow pepper with Yuzu ceviche, purple sweet potatoes with avocado – it’s all too tempting. 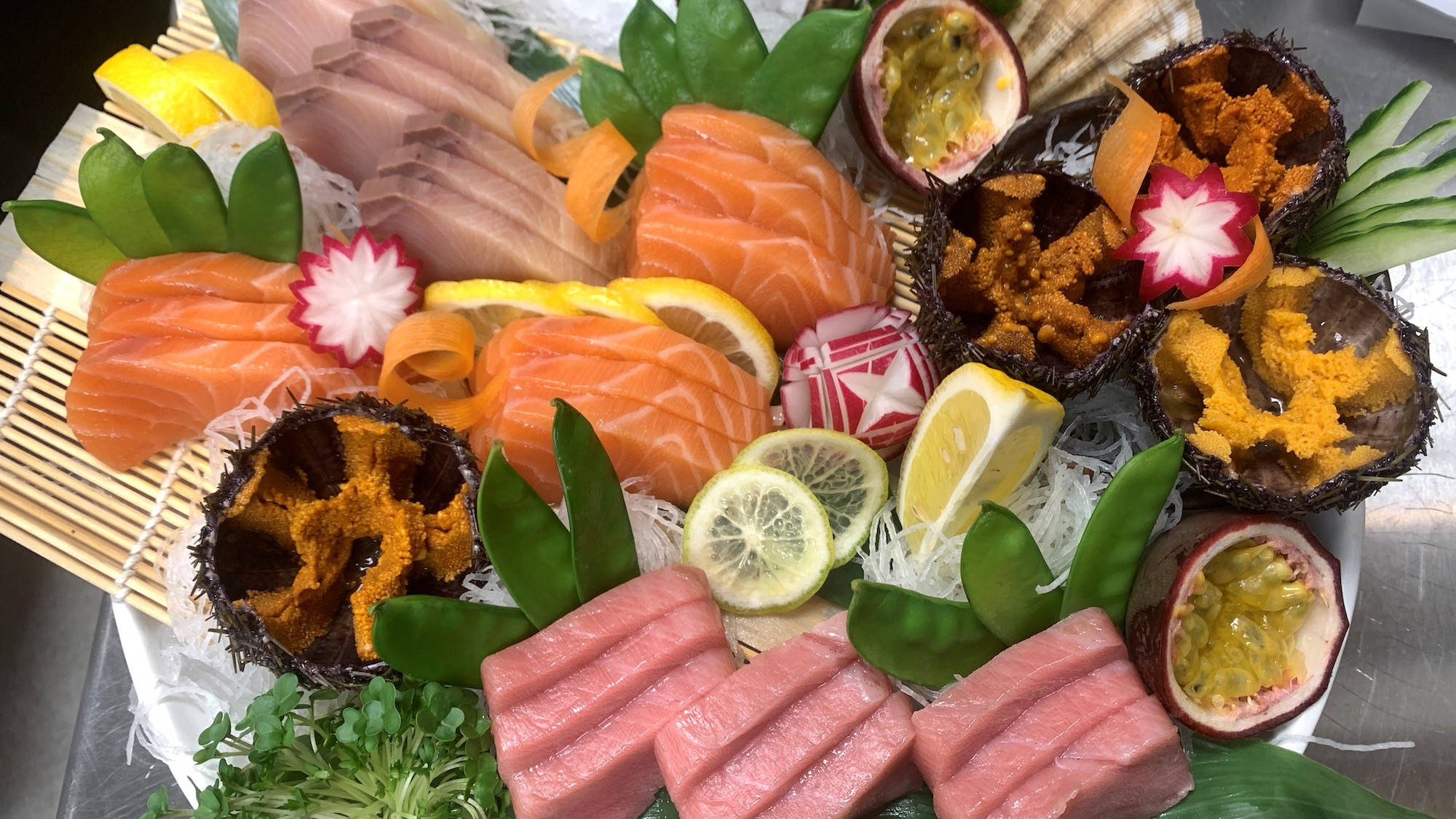 What are you going to wash all this down with? Well, they have Asahi on tap and a solid wine list, but the real joy is to be found in their signature drinks. They have a pair of Korean rice wines – Makgeolli and Soju – as well as Japanese Sake, Plum Wine and their own cocktails. The Coconut Sling and Green Apple Sour pair perfectly with the fusion dishes that run through the menu.