Alley Cats is the new place to hangout in Chapel Allerton. 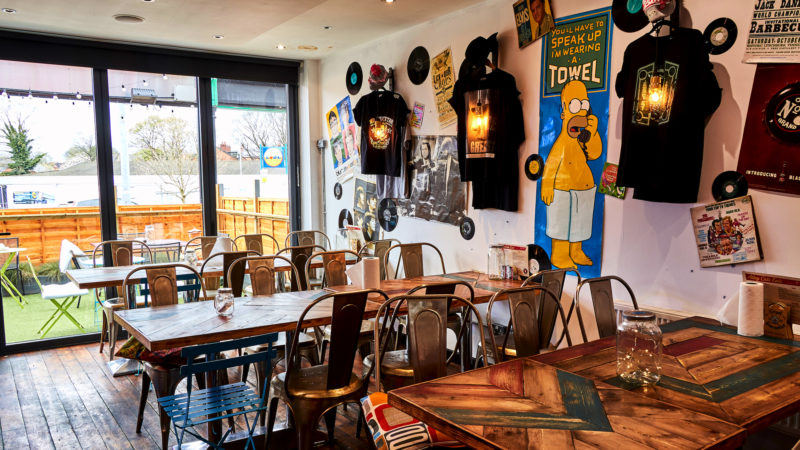 Daniel Ayton and Kehan Cooper have been working in the city’s bar scene for years, but in 2018, something changed – they decided to open their own bar. Alley Cats is an American-inspired bar and music shop on the southern edge of Chapel Allerton, it’s a place where you can indulge in quality craft beer and proper Stateside comfort food, as you listen to and shop for vinyl records.

“It all started on New Year’s Eve when we resolved to make this the year we actually go out and do it for ourselves,” Ayton told us. “We really wanted to bring something that reflects both of our personalities. We wanted a bar and eatery that offered an experience that was more than just what you eat or what you drink. We feel what we’ve brought forward invokes feelings of nostalgia, as well as providing a great atmosphere for people to enjoy themselves.”

They’ve transformed the much-missed Boss Burgers into a retro pop culture paradise – expect vintage film posters, band t-shirts, vinyl records, brewery signs and even guitars on the walls. It’s not a massive venue by any means, but they’ve really made it into their own space. They’re not short of seats too – the reclaimed wood tables and industrial metal chairs catch the eye as you walk in and there’s even a little beer garden out front with deckchairs for the warmer months.

You’ll definitely want to turn up hungry. They’ve put together a pretension-free menu full of American classics – it’s messy, tummy-filling food and we love it. Their main staple is the grilled cheese sandwich – two slices of thick white bread, jam-packed with a filling of your choice and smothered in Gruyère béchamel. You could go for the Porky Pig, which brings together smoked streaky bacon, brie and caramelised onion chutney. Or why not try Zorba the Greek? It’s a mix of halloumi, chilli jam and Kalamata olives. But if you want an insider tip, Daniel’s got his own recommendation for you.

“My personal favourite is The Godzilla. It’s basically a meat feast sandwich with two different kinds of cheese and our house made J.D’s BBQ sauce. It’s a monster to eat but the combination of sweet and sticky bbq sauce, with crispy bacon, minute steak and pepperoni, all packed between Monterey Jack cheddar and mozzarella is a real treat for the tastebuds.”

If you’re not sold on the sarnies, you could always go for their trio of chicken dishes – they serve hot pepper chicken strips and chicken wings, but the most tempting dish is the Classic Chicken Parmo. It’s a North East delicacy you might not have come across before, and it brings together a breaded chicken escalope, béchamel sauce and Monterey Jack cheddar, on a bed of chips and garlic mayo. Their sides are just as tempting. The Jack Daniel’s beef chilli cheese fries are a good shout, or you could try the poppers, their own recipe fish pie bites with homemade tartare sauce.

It’s not just a place for grown-ups to enjoy – this is definitely the kind of place you can bring the kids to. You can treat them to a trio of indulgent desserts. Nana Bell’s Banana Bread is the bomb and the Belgian Waffles are great, but it’s the Gimme S’more that will steal the show. It’s a plate of broken waffles topped with fresh strawberries, maple syrup and melted marshmallows. You’ve got classic American soft drinks too, from coke floats to milkshakes.

Alongside the food, they’ve got a small range of craft beer on draught, as well as one cask line which rotates on a regular basis – Ayton recommends the Camden Pale Ale or Stones Go To IPA. They’ve got wine too, or you can try their cocktail menu which changes every month – you can’t go wrong with a Maple Margarita.

And on top of all that, there’s the music emporium. In the far corner of the venue you’ll find tray after tray of vintage second hand vinyl records – they’re more than happy for you to try before you buy, so make the most of the in-house record player while you’re there. They’ve also got vintage games consoles to play on and if you keep an eye on their chalkboard behind the bar, you can see what special events they have lined up. With everything from gaming tournaments to barbecues and live music, you’ll have plenty of reasons to come back.

Alley Cats is a cool new addition to Chapel Allerton, one that will no doubt go down well with local residents, but why not head out there and try it for yourself?