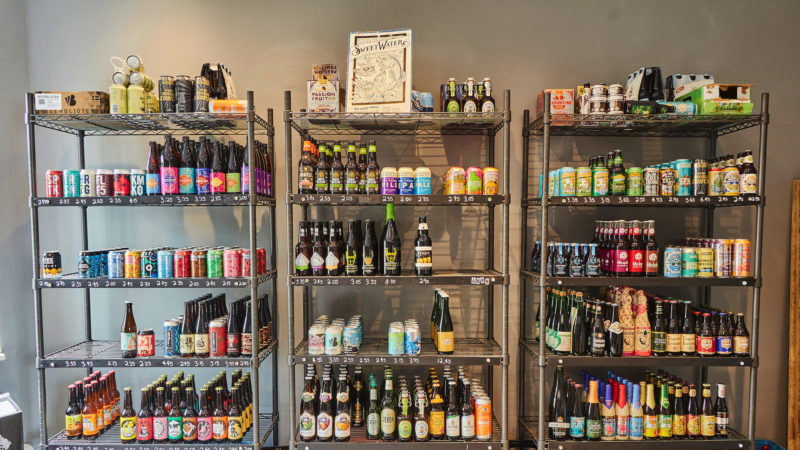 In the space of just a few months, Chapel Allerton has acquired two new bottle shops – and this one’s all about craft beer.

A mutual love of beer inspired owners Eve Jackson and Ade Hunter to open Caspar’s Bottle Shop. Jackson has form – she’s come into this with a solid background in beery goodness from her days working as Assistant Manager at Further North. And Hunter has added business prowess into the mix, coupled with a real love of beer, of course.

They’re both Chapel Allerton locals and they noticed that, although there are lots of lovely places to drink quality beer, there weren’t many places to buy it (at least, not at takeout prices), so they decided to do something about it. The result is a small, friendly bottle shop where you can pick up all your favourite brews.

They’ve kept the decor simple. Think muted greys, reclaimed wood and industrial-style shelving with blackboard paint, so you can see the prices at a glance. First and foremost, it’s a shop – so you can pop in, pick up a few quality beers and take them home, maybe for those summer BBQs. There’s even parking, so you can grab and go. But you can also make the most of their events, with a few stalls around the shopfront to gather round on as they share their beery know-how.

And my, what a mighty fine selection of beer they have. If it’s local breweries you’re after, you’ll be spoilt for choice. They’ve got The Meanwood Brewery, Eyes Brewing and Kirkstall, among others – and Jackson has brought a little bit of her past with her, in the form of North Brewing Co’s Transmission IPA, “My Further North days proved this to be a fan favourite and there’s nothing better than local brews. It’s super drinkable and tasty, but a bit stronger. Definitely give it a go.”

It’s not just local beers though. They’ve handpicked the best international brews, so you can experiment a little. From classic Belgian beers to American IPAs, you’ll find it all on their oh-so-cool shelves. There’s enough to keep you coming back, but if you need to narrow down the options, Jackson has a recommendation you might not have tried before – Lindeman’s Gueuze. “It’s a Belgian Lambic and its sourness gives you a really refreshing taste, which makes it ideal for summer,” she told us.

Wine definitely isn’t a focus for them here, they’re leaving that to new wine shop, Wayward, but they will be stocking a small selection of handpicked spirits. The range is growing all the time as they try, taste and order new tipples, but right now their go-to drink is Manchester Three Rivers Gin.

Caspar’s Bottle Shop is a marvellous little addition to Leeds and one we’ll no doubt make the most of as the summer heats up. Check it out and let us know what you think.