Are you ready to engage in human vs. food combat? 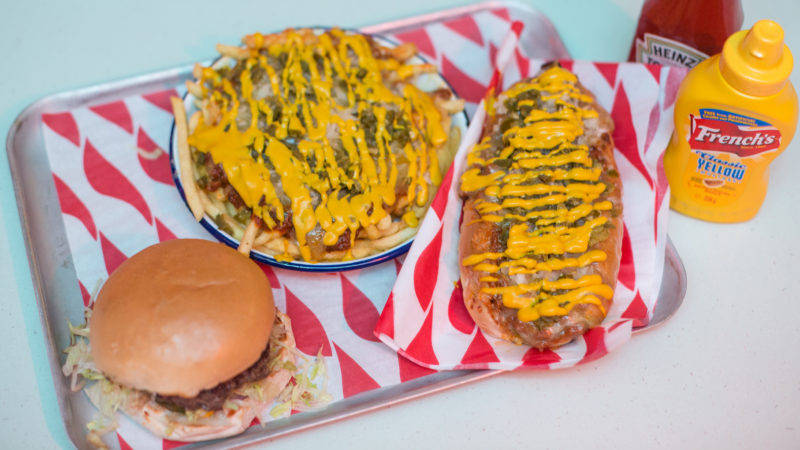 Leeds is full of Man vs. Food challenges, from the tough to the terrifying. Which one will you try first?

There’s a generous plate of food and then there’s… this. Wear your loosest clothes, leave your belt at home and arrive hungry, because the best eating challenges in Leeds take no prisoners. Of course, it’s all totally worth it – how else are you going to work out which of your mates has the appetite of a mouse, and who is a true greedy guts? Time to tuck in… 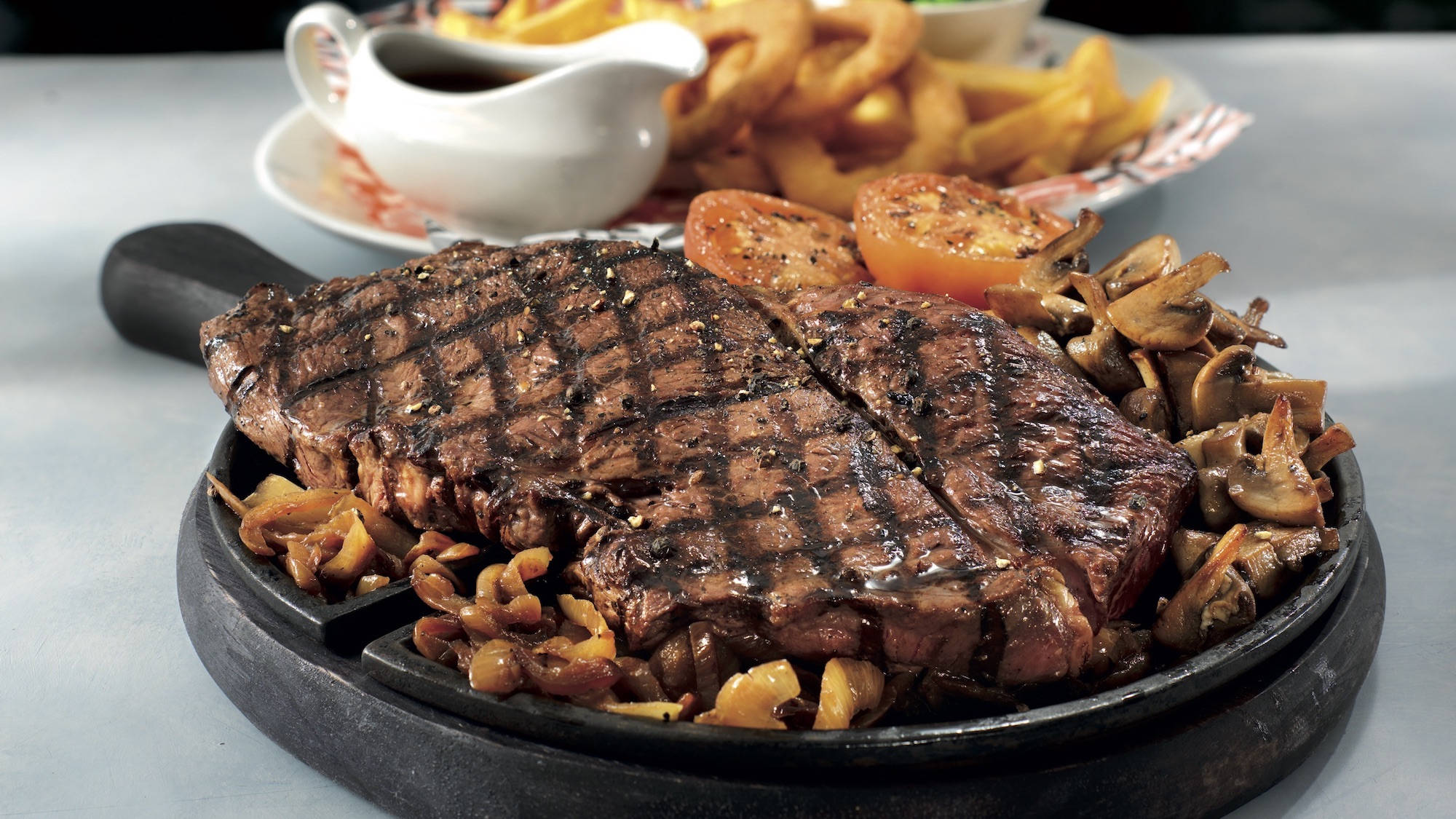 Not one challenge, not two, but five. You can take them on at the duo of Flaming Grill pubs in Leeds – the Angel Inn and the Bridgewater Arms. If you pull any of these off, you’ll get your name on their ‘Wall of Flame’ and a certificate – but which one will you take on first? Who Dares Wings pits you against 25 chicken wings in a flurry of favours, while the Steak Fondue Challenge is a mammoth 32oz rump steak made for dipping into a whole baked Camembert (plus sides). Not content with just those two? The Big Mexican, Macxcalibur and Triple Threat are all waiting to be taken down.

What better time to take on one of the most daunting food challenges in Leeds than at breakfast? The whole menu at this Hyde Park cafe is tempting and generous, but the Paralyser is something else entirely. On the kind of outsized plate you’d only find on the BFG’s dinner table, you’ll discover that good things come in fours. That’s four sausages, four eggs, four bacon rashers, four hash browns and you guessed it – four slices of toast. If that sounds like a breeze, you haven’t taken into account the mushrooms, black pudding, beans and tomatoes. See this off in less than 12 minutes and it’s on the house. 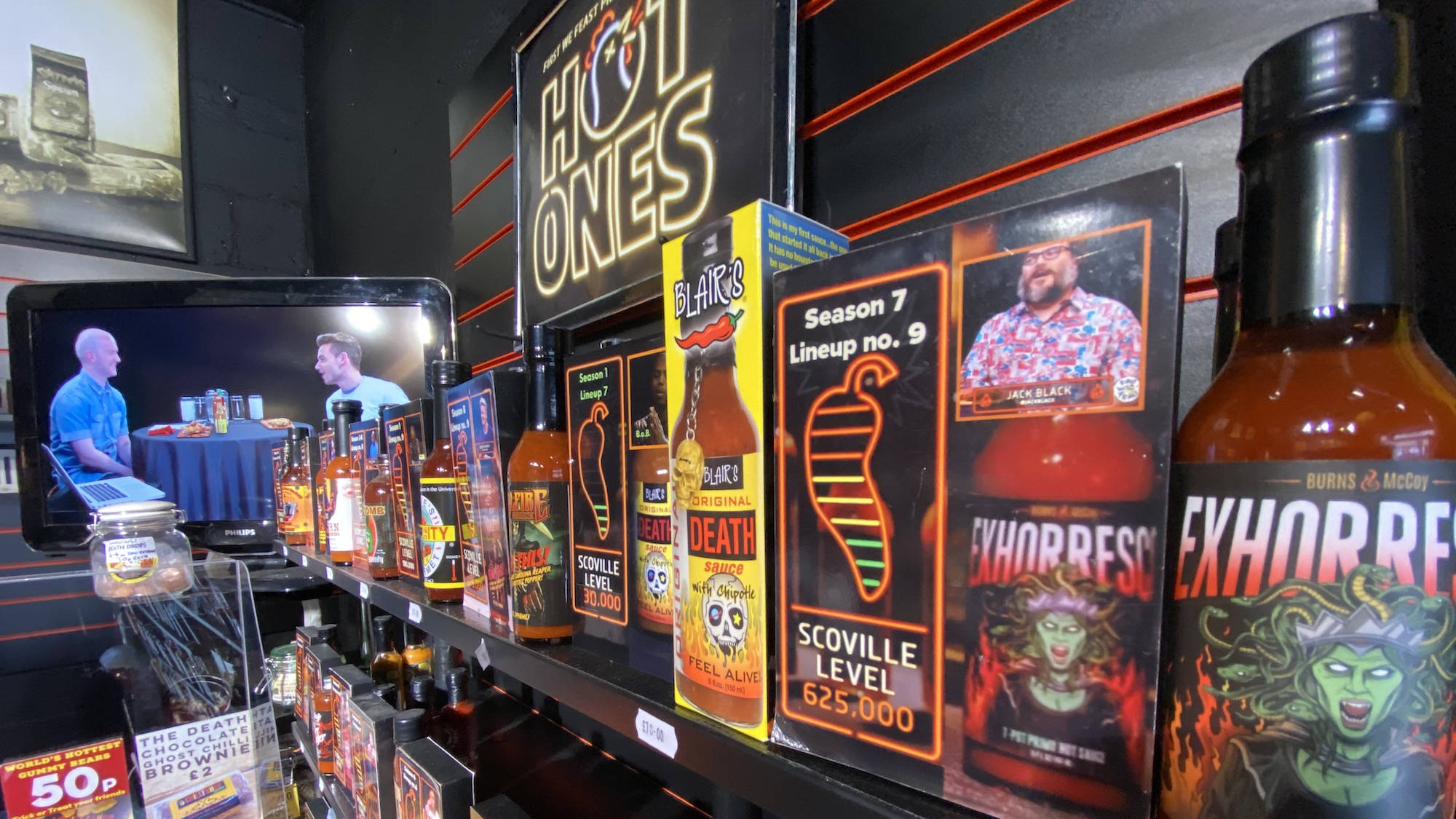 The Chilli Shop is the home of all things spicy in Leeds and they take their love of heat to venues across Leeds for the Hot Ones Wing Challenge. In the past, it’s been held at Mojo, The Brotherhood of Pursuits & Pastimes and Rebound Social. Wherever it takes place, you’re in for a hell of a wing-based feast. For £20, you’ll get either chicken or vegan cauliflower wings doused in 10 different hot sauces that get progressively hotter – to make it worse, you’ll get interviewed between each one, if your mouth will let you! No drinks allowed – this is a tough one, but conquer it and you’ll be a legend among your friends.

There’s little danger of your mouth catching fire from the Queeny Special – this is gentle fare in comparison to demon wings – but it’s definitely one of the premier gut-busting food challenges anywhere in Leeds. Queen Street Fisheries will serve you a meal like no chippy tea you’ve ever seen before. We’re talking two large fish, two potato scallops, three portions of chips, sausages both battered and fried, a fish cake AND a fish bap. And the pain doesn’t end there. There’s also two sides, a bread cake and then two battered Mars Bars for dessert. Your reward? Finish up and it’s not only free, you’ll get £20 too. 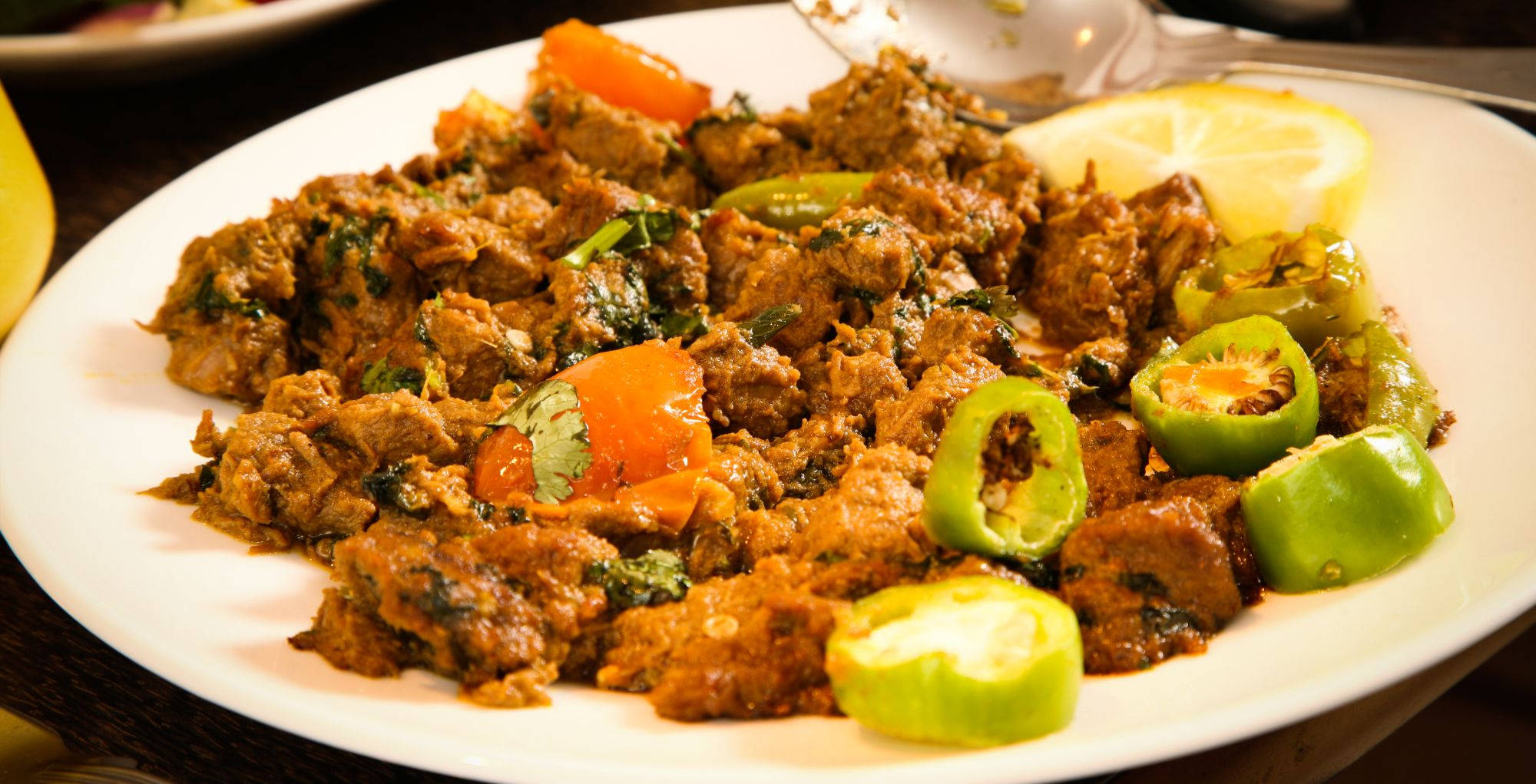 This is not a curry in a hurry. There are two food tasks to take on at Akbar’s, with one being achievable, the other hellish. The ‘Big Un’ isn’t too tough – you’ll get a large meat feast balti, pilau rice and one of their trademark naan breads. Scoff it and you’ll get a dessert that you probably don’t have room for, and a certificate of achievement. The second challenge is a doozy. ‘For the Brave – Phall’ is fiery, fearsome food that’s not for the faint-hearted. This is the hottest dish to come out of their kitchen, so bring along that one mate who reckons they can handle the hot stuff and put them to the test.

If you’re nursing a hangover or just need the perfect start to a day, Popina’s is the place to go. It’s a student staple in Hyde Park, but it’s also worth a pilgrimage for yet another feisty Leeds food challenge. If the large, extra large and mega breakfasts aren’t enough for your appetite, go up against the Mega Monster Breakfast. Croissant-munchers beware – this is a slab of multiple eggs, bacon, sausages, black pudding, beans, tomatoes, fried bread, hash browns and mushrooms. Eat it, and you get it for free, as well as seeing your name on the champions wall. 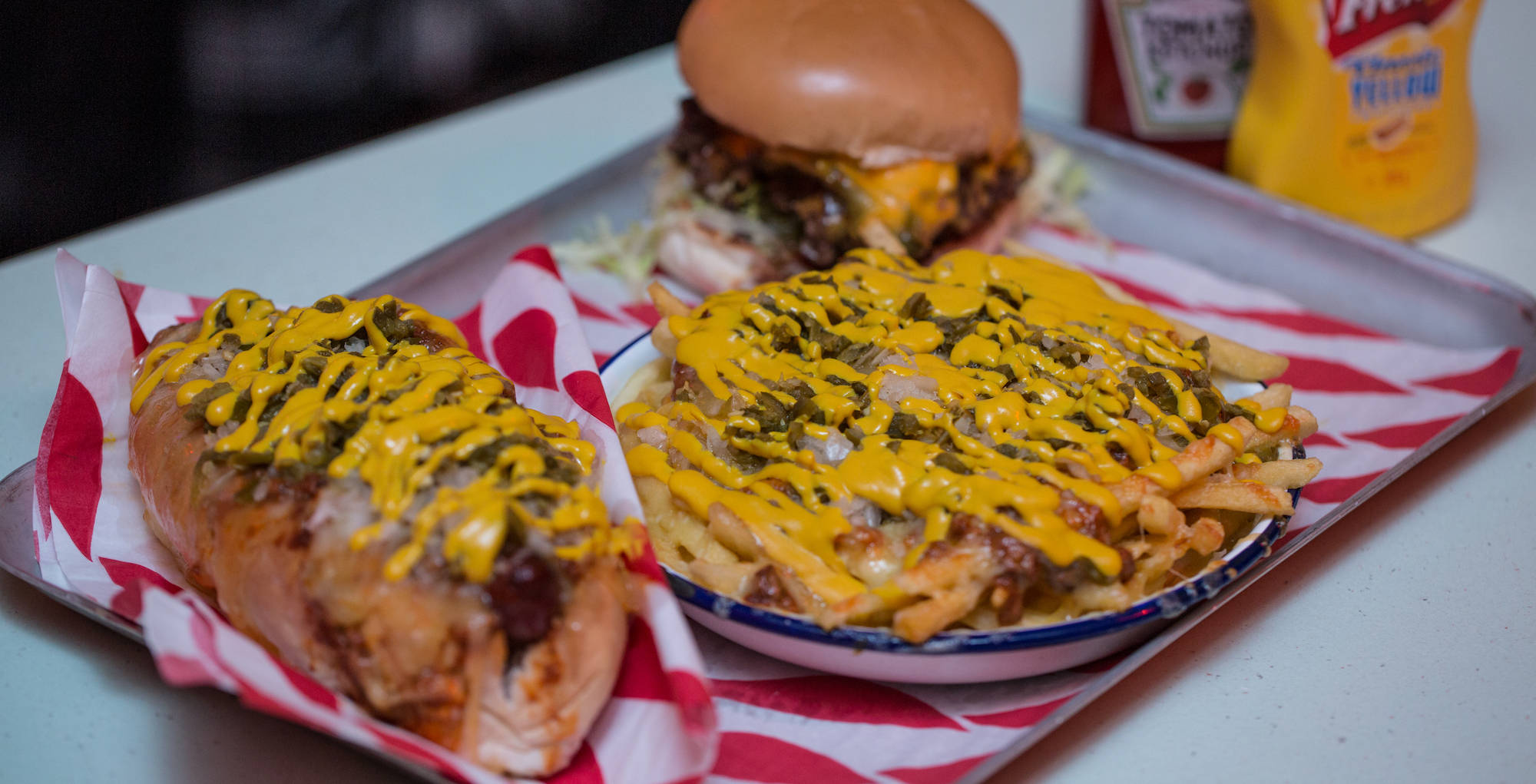 MEATliquor’s Triple Chili Challenge isn’t just difficult, it’s downright tasty too. Which helps, of course. The meat-based option sees you take on the double Green Chili Cheeseburger, a loaded chili dog and a pile of chili cheese fries. A plant-based alternative pits you against the Burgaloo 2 burger, the black bean chili dog and the black bean chili cheese fries. The good news? Polish off your chosen food challenge and you’ll get it for free. With both worth well over £20, that’s a pretty good deal. The bad news? You’ve only got 10 minutes to do it. Better get eating…