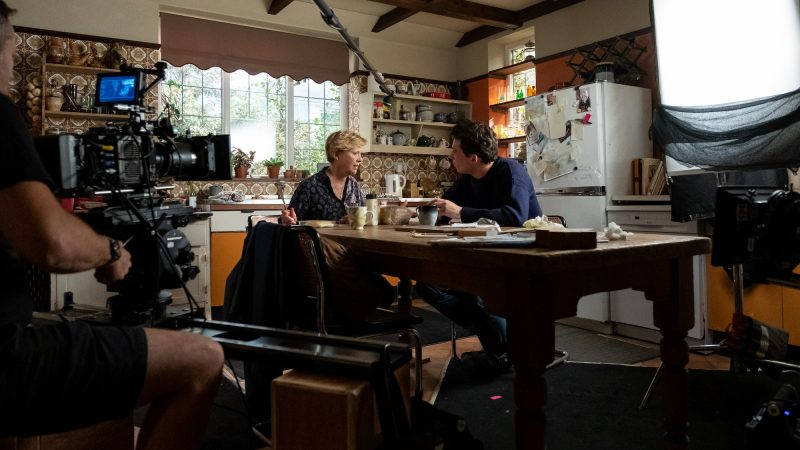 From brand new studios to tech hubs, media companies are choosing the Leeds City Region as the place to make TV outside London.

It’s two years since Channel 4 announced its new National HQ would be moving to Leeds. Since then, the media industry in the region has absolutely exploded. New production companies have opened, existing ones have expanded and interest in the city’s media talent has boomed. Don’t believe us? Just take a look at the big changes that have taken place since Channel 4 chose Leeds as its new HQ. Leeds Studios is a joint venture between All Studios (the folk behind Manchester Studios) and our very own Prime Studios. It’s being built on the site of an old printworks on Whitehall Road in Holbeck, which is going through a £7.5 million refurbishment. The new studios have five large sound stages, as well as 25,000 square foot of production offices and 30,000 square foot production facilities, like prop stores, workshops, make-up and costume.

“It has been a long-held ambition of mine to develop a large scale studio facility for the city of Leeds, and now, with the support of our partners All Studios and Leeds City Council, we can offer productions a world-class facility in the heart of the city centre,” Ben Hepworth, Managing Director of Prime Studios, told us. True North is the biggest independent producer of factual television in the north of England. After Channel 4 announced their HQ move, True North started a major expansion of their operation at Marshalls Mill. They opened an extra 3,910 square foot of post-production facilities, called True North Post, in February 2020. Of the nine new suites, two have 4K capabilities.

“With Channel 4 moving to Leeds, there has never been a better time to be an established production company in the city, and Marshalls Mill is a brilliant location to take advantage of the opportunities that lie ahead,” Andrew Sheldon, True North Co-Founder and Creative Director explained. In March 2020 ITN Productions opened a new office to make television in Leeds. Their offices in Aire Street, near the entrance to the train station, have state of the art editing facilities. Since it formed in 2010, ITN Production has made non-fiction content for the UK and the rest of the world. Its clients include BBC, ITV, Channel 4 and Channel 5.

“Having a regional office is a necessity for us,” Ian Rumsey, Director of TV Production at ITN Productions, explained. “It’s vital in order to recruit and develop new talent out of London and to make programmes which truly reflect the nation.” As a comedy duo, Larry & Paul started their careers at Radio Aire in 2007. Since then, their sketches, which include The ISIS Closing Down Sale and Every Political Debate Ever, have been featured on the BBC. The new studio will develop scripted comedy for television and radio, in the hope of collaboration with the new Channel 4 HQ and other broadcasters across the UK. The broadcasting company behind Dave, Gold and Alibli launched a ‘regional innovation hub’ in Leeds in November 2018. UKTV chose Leeds because of its impressive tech scene, convenient transport links and emerging creative industry.

The office was initially set up to house a team of 10 technology specialists, with the aim of enhancing their content distribution capabilities, analytics and use of tech. In the future, the broadcaster says there is potential to build up their precedence by adding staff from the programming and editorial side. Pact is the trade body for all UK independent television, film, digital, children’s and animation media companies. Expanding outside of London, Pact opened its Leeds office in May 2019 to help its members grow their businesses across the UK. Initially, there will be two people working from this office as well as hot desks for their members.

This office will be working with Channel 4, as they move their HQ to Leeds. “Growing the production sector outside London must be a team effort and for it to be meaningful and sustainable we need to work together with Pact, our production partners and partners in the cities and regions across the UK,” Ian Katz, Channel 4 Director of Programmes, explained.

The National Film and Television School opened a new branch The National Film and Television School opened a Leeds branch in January 2020, and their first intake welcomed 150 students. Their new Leeds base sits alongside the school’s existing facilities in London, Beaconsfield and Glasgow.

Courses on offer in Leeds include three-month certificates, twelve-month diplomas and short courses in key film, television and games craft disciplines. The opening of the school in Leeds was part of the NFTS’s ongoing strategy to support the growth of film and television production outside London. It was supported by Channel 4 and ITV. Screen Yorkshire champions the film, TV, games and digital industries in Yorkshire and the Humber. They opened a new Film Office in November 2018 to provide support on the creation of films in the area. They’re the go-to source for any enquiries on location, facilities, crew and production.

In its first year, the Film Office helped bring 27 high-end television productions and 14 feature films to Yorkshire. With budgets between £10 million and £20 million per film, this gave the local economy a massive boost and helped to provide 1,500 days of work for local crews. “The Film Office is a critical, expert, component in driving this business to Yorkshire and in its first year alone has demonstrated just how valuable a resource it is,” Sally Johnson, CEO of Screen Yorkshire, explained. Lime Pictures, which makes Hollyoaks and The Only Way Is Essex, announced a new Leeds-based subsidiary in November 2018, just weeks after Channel 4 confirmed its HQ move. The company was set up with the help of Mark Robinson, the founder of the ITV Studios label Shiver.

Wise Owl Films produces non-scripted television. Its first commission was a behind the scenes look at the Tyne and Wear Metro for ITV. Since then, it’s given us programmes including David Jason’s Great British Inventions, which was picked up for a second series by More4 in December 2019.

Endemol Shine North opened a Leeds office in 2019, focussed on true crime and documentaries. It rebranded and changed its name to Workerbee at the same time, in a homage to its Manchester roots.

Workerbee is one of the fastest-growing TV businesses outside London. It’s the brains behind shows like Murdertown, Armed and Deadly and the NHS Big Singalong Live. That winning streak is set to continue as they’ve been commissioned by Channel 4 to document British engineers as they try to create the fastest car on Earth. The coronavirus pandemic has put pressure on every area of industry, including media, so the LEP launched the Indie TV and Film Development Fund in May 2020 to help production companies across the Leeds City Region get ahead of the competition.

The fund, which totalled a whopping £224,817, is now fully allocated. Altogether, they’ve supported 22 projects across 13 businesses, helping companies to produce content to pitch for commissions. “The funding from the LEP has been a huge help in boosting and maintaining our content development during these difficult times,” Kay Mellor OBE, Managing Director of Rollem Productions, explained. “In particular, we’ve been able to support upcoming writers to ensure their work can continue and they don’t miss out on any career opportunities.”