The age-old tale of Cinderella is given a modern update in this bewitching production from Opera North. 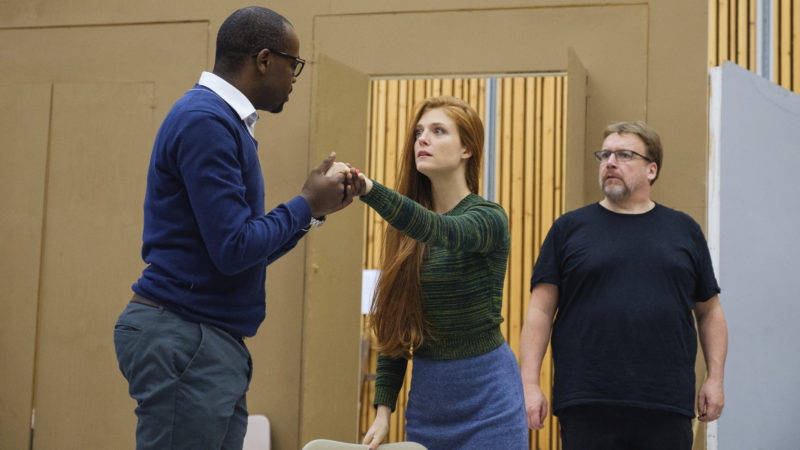 From children’s books to Disney movies and pantomimes, Cinderella has been brought to life in many ways, but few have as many surprises in store for you as the opera.

Rossini’s take on the classic fairy tale is magical, but not because of the Fairy Godmother. He brings the story to life with a score that continually surprises, as the cast come together in a series of fun, fast-paced and often mind-boggling choruses. Opera North have taken a little creative licence with it too, bringing it bang up to date, so it’s both familiar and new – seriously, you’ll be kicking yourself if you miss it.

It’s not the story you know

What if Cinderella wasn’t a fairy tale? What if it was a modern day love story, with a heroine who scrubs the floors of a dance studio and a Prince who believes beauty isn’t just skin deep? That’s exactly what’s on offer, as Opera North give Rossini’s La Cenerentola (that’s Cinderella in Italian) a contemporary twist. “It’s not like Cinderella that most people think of because there isn’t a Fairy Godmother, there isn’t a pumpkin and there isn’t a glass slipper,” Director Aletta Collins told us. “Rossini decided that he didn’t really want to make a Cenerentola that was all about magic. He wanted the story to be about the heart, to be about love.”

Rossini may have wanted to focus on the heart, but he also had to deal with the practicalities of the theatre. With a quick turn around (La Cenerentola went from idea to premiere in under two months) and limited special effects (it was 1817), Rossini made the call to create a non-magical version of the classic fairytale, with a philosopher in the place of the fairy godmother, a wicked stepfather instead of the stepmother and a golden bracelet instead of the glass slipper.

Rossini’s music is vivacious, fast paced and absolutely mesmerising, layering one voice atop of another to create something really special. He pushes the performers to the absolute limits (Sunnyboy Dladla has to hit five high Cs in his role as the Prince), and yet, it will have you nodding along in the audience, as if it’s a pop hit.

This version of Cinderella is set in the modern day

Cinderella and the Prince are from two different worlds – but you’ll recognise them from our own, because the story is set in the modern day. Our heroine works in a dance studio, and lives above the shop, while the Prince has booked out an entire hotel as he scours the country for his new bride. Throughout the opera, the rich are contrasted against the poor, but all is not as it seems.

It’s a dream role for a mezzo-soprano

Believe it or not, mezzo-sopranos don’t usually take the lead, at least not the female one. You see, they often play trouser roles, dressing up as young boys, like Cherubino in Mozart’s The Marriage of Figaro. But that’s not the case in Cinderella. “It is definitely a dream role, particularly for a singer of my voice type,” Wallis Giunta, who plays Cinderella, told us. “To get to sing the title role, a female role AND get to whip out my coloratura (fancy fast notes) ticks all of my boxes!”

Never has an opera been more suited to a family outing. It’s a story the kids already know and love brought to life through music – and you can expect plenty of twists, turns and laughs along the way. They even have a matinee performance, if you want to catch the show early.

There are 25 men, but just 3 women – and the result is spectacular

One of the things that makes Cinderella stand out is the fact that it has a completely male chorus, and the cast is made up of just three women. The result is incredible, with the voices of Wallis Giunta, Amy J Payne and Sky Ingram rising above the deep tones of the men.

Not only is this the first time Opera North have produced Rossini’s La Cenerentola since 1983, but it also promises two UK debuts. Wallis Giunta and Sunnyboy Dladla have never sung in England before, so you could be there for their first ever UK performance.

Prepare for some seriously extravagant costumes

Not only do we have royalty, but Cinderella works in a dance school, so you’ll be taken from Flamenco dresses to ballgowns in the blink of an eye. Costume designer Gabrielle Dalton took a lot of inspiration from Strictly Come Dancing, but she’s made it even more extravagant for the stage. “The costumes are contemporary which is quite unusual for me. There’s lots of sparkle and feathers – it’s been really fun,” she told us. “Keep an eye out for Alidoro, who is a bit like Mr Benn with a number of costume changes in the production, and some rather unusual outfits along the way.”

Appearances can be deceiving

In Rossini’s version of Cinderella, the rich are treated well and the poor are treated badly – so the Prince has a conundrum. He wants to marry a kind, caring woman, but how can he ever find one, if everyone treats him like a Prince? So he switches places with his servant to find a woman who will love him, regardless of money or title.

Cinderella isn’t rich, she doesn’t have nice clothes, she doesn’t even get to take dance lessons like her sisters, but she is a beautiful person, and when she looks in the mirror, that’s what she sees reflected there. “She’s the only person in the story that can see beyond the outside appearances,” Collins explained. “She can see herself in the mirror as a beautiful princess dancing in a ball, but it’s not until the story takes hold that she ever thinks that it could be possible.”

It’s sung in Italian, but you won’t have any trouble knowing what’s going on

Worried about it being in Italian? Don’t be. There are screens with subtitles on either side of the stage, and the very nature of opera means that it takes them longer to sing it than it does for you to read it. Even if you miss a line or two, the action on stage is so wonderfully dramatic that you’ll always know what’s going on.

Listen out for the twisted, tangled sextet

When Cinderella’s stepsisters find out that she’s the girl the Prince has been looking for, all hell breaks loose – and it’s a musical masterpiece. “They go into this really weird bit of singing where they sound a bit like a tangled knot, you don’t know what to do, it’s all so twisted and weird. It’s brilliant,” Collins enthused.

It’s been years in the making, but they only get 2 months to rehearse

Operas spend years in pre-production, but you’d be surprised how quickly it all comes together. In fact, the performers only get 2 short months in rehearsals before it premieres on the Leeds Grand Theatre stage – and the director doesn’t actually meet the singers until rehearsals begin.

Although the music from Rossini’s La Cenerentola is often used in concert performances, that’s not what you’ll get here. This is a full scale theatrical performance, and they’ve gone to great lengths to ensure that there’s always something to see, as well as hear. “I think sometimes in the opera you have these giant set pieces where there are five or six people all singing at once, and it’s tempting to just go ‘let’s just stand in these positions and sing that’.” Collins explained, “But what’s been really exciting is that we’ve not let ourselves do that, we’ve been thinking what’s this about? What are you actually singing? And when you find out, it gives you lots of other opportunities of telling the story.”

If you’re a fan of old movies, you might well recognise Cinderella’s ball gown. It’s inspired by the one worn by Grace Kelly in High Society. And the Prince’s outfit? That takes its lead from our very own Prince William.

‘Non più mesta’ is a thing of beauty

Rossini has saved the best for last, as Cinderella’s aria, ‘Non più mesta’, is the showstopper. Filled with trills, leaps and super-fast torrents of notes – it will have you gripped until the very end.

Opera North will perform La Cenerentola at Leeds Grand Theatre from Thursday 16th to Saturday 25th February 2017. With our exclusive offer, you can get some of the best seats in the house with a cocktail and 50% off food at Manahatta – book your tickets now.