The Best Bottle Shops in Leeds

Enjoy great craft beers at home thanks to these expert stores. 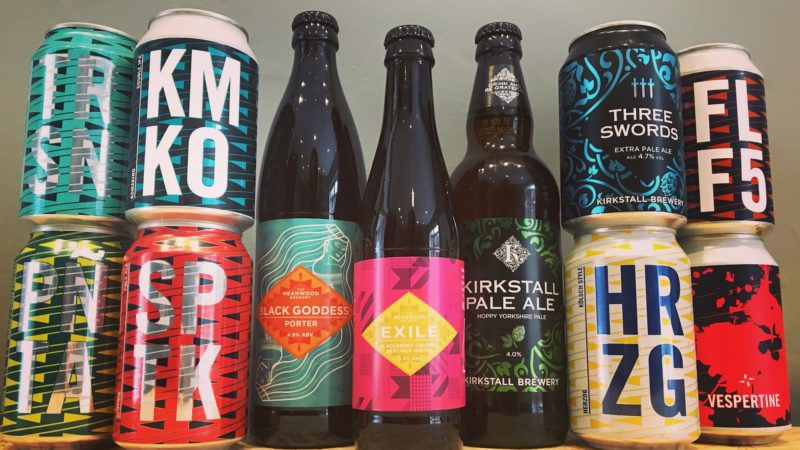 From locally brewed pale ales to exotic international brews, you can pick up all kinds of great beers from these Leeds bottle shops.

If you’re a craft beer aficionado, the chances are you won’t find the brews to titillate your palate down the corner shop or in your local supermarket. So where do you go? To Leeds’ bottle shops, of course. These places are run by experts who know their IPAs from their APAs and are chock full of delicious beers made by the world’s best breweries. So go on, pay them a visit and stock up. Little Leeds Beerhouse can be found within Brownhill & Co where they stock great craft beers and real ales to enjoy there or to takeaway. It’s perfect if you’re looking for small-batch beers by a range of UK indie breweries, from Verdant Brewing Co to Deya Brewery, but they also stock a host of incredible European beers. In fact, they’ve got a whole section dedicated to bottles of Belgian lambic, a beer that goes through a special fermentation process with wild yeast to give it a tart, cider-like taste.

The Hop Shack sells 130 craft beers from across the globe and is the best place for craft beer in Horsforth. You can get cans from across Europe, like Ireland’s Whiplash and Berlin’s Berliner Pilsner. Or go for a tipple from Leeds-based brewery North Brewing Co. If you want to take some for the road, they can sort you out with a 64oz or 32oz growler which you can fill with one of six keg beers they have on tap, or just enjoy a pint in their outside area.

Growlers is known for its hefty old beer fridges, which are full to the brim with all the best cans from near and far. They stock awesome collaborations too, from favourites like Piglove, North Brewing Co and Square Root. Want to sample a tipple fresh from the tap? They fill up growlers with craft beer to go, which pair perfectly with the whopping burgers that fly out of the kitchen.

With over 900 UK and international beers at your fingertips, Raynville is now one of the biggest and best craft beer shops in the country. It’s the beery equivalent of Willy Wonka’s chocolate factory – you can play it safe with familiar favourites or introduce yourself to the great local breweries. But if you want to expand those horizons, Raynville is the place to do it, stocking everything from must-try beers from across the globe to one-off collaborations between innovative breweries. This little bottle shop in Guiseley has oodles of craft beer for you to pick up and enjoy at home. You can get favourites from local breweries like Horsforth, North Brewing Co. and Wilde Child in bottles and cans, as well as an ever-changing selection of beers to fill your growlers. They also have a host of continental brews, and if beer is not your thing, there’s plenty of gin and rum. Terminus is the Meanwood Brewery tap room and bottle shop. You can get their own beers to go, including the Black Goddess Porter and the Heroic IPA, alongside a host of cans and bottles from incredible craft breweries. From Arbor to Cloudwater, Salt and Brass Castle, it’s a who’s who of the best breweries in the country. They’ve got a brand new outdoor area too, which is perfect for enjoying a pint or two fresh from the tap before you hit the shop. It might be better known for its wine offering, but you can also find top-quality beers to-go in this Ilkley bottle shop. Alongside an array of hard-to-find global beers like Quilmes, they also stock cans and bottles from local breweries. Whether you fancy an Ilkley Pale, a Saltaire Best or a Sam Smith Imperial Stout, you can pick it up in-store or order direct from their website all year round.

Martinez Wines, 35 The Grove, Ilkley, West Yorkshire, LS29 9NJ. They’re open from 9am to 6pm Tuesday to Wednesday, 9am to 7pm Thursday to Friday and 9am to 11pm on Saturdays. On Sundays, they’re open 10am to 6pm. You can place orders for home delivery online. This intimate bottle shop and bar showcases the best craft breweries in Leeds and Yorkshire, alongside a treats from further afield. From Vocation to Winton, Abbeydale and Ridgeside, you’ll find a few familiar favourites on the shelves. They also stock rare one-offs and collaborations. You can get growler fills with fresh keg and cask beer to take home with you. A bottle shop-cum-bar in Crossgates, The Assembly is a cool, laid-back joint where you can take your pick of local craft beer to go, alongside hand-picked wine and gin. They have fridges full of amazing brews from local breweries like Magic Rock, Northern Monk and Tiny Rebel, as well as an ever-changing selection on tap, which you can enjoy with a couple of mates in their outdoor area. North Brewing Co. Tap Room has its very own bottle shop. As you walk in, you’ll see a row of fridges all stocked with incredible craft beer. You can get all their classics here, from Transmission to Pinata, alongside an array of top-drawer tipples from UK and international craft breweries. Want a pint to go? Take your pick from their 24 taps and they’ll fill a plastic cup for you to take away and enjoy at your leisure.

Latitude is a staple bottle shop when it comes to wine and spirits, but they also have a cracking beer selection. Everything is specially picked and with the owner’s 30 years of experience in the field, you can expect to find the best. Their shelves are lined with some of Yorkshire’s finest beer from bottles of Ilkley Brewery and Black Sheep Brewery to cans from Northern Monk and Ridgeside Brewing Co.

Latitude, 5 Cherry Tree Walk, Leeds, West Yorkshire, LS2 7EB. They’re open from 10am to 5pm on Monday, 10am to 6pm Tuesday to Wednesday and 10am to 7pm Saturday to Sunday. You can click and collect to pick-up from the shop or get home delivery.

Caspar’s Bottle Shop is the go-to craft beer shop in Chapel Allerton. Although they take pride in providing beers from the best up and coming local breweries like The Meanwood Brewery and Abbeydale Brewery, they also sell a wide range of international favourites, from Norwegian brewery Amundsen to Denmark’s Mikkeller. They have four keg taps with an ever changing array of beers for all your growler needs.

For a well-stocked beer shop that also does growler refills, head to The Curious Hop in Otley. From Sweden’s Omnipollo to America’s Magnify Brewing Co, you can get a diverse range of worldwide tipples, but they have a real focus on great local breweries like Harrogate Brewing Co, Atom and Brew York. They sell growlers, which you can fill with one of four fresh keg beers on offer. But it’s not just a shop – it’s also a cool bar, decked out with beer mats on the walls.

The Curious Hop, 18 New Market, Otley, Leeds, LS21 3AE. They’re open from 11am to 6pm Tuesday to Thursday, 11am to 7pm Friday to Saturday and 12pm to 5pm on Sundays. for click and collect only or you can order online for local delivery.

Fuggle and Golding is an intimate tap house and bottle shop in Ilkley. You’ll find loads of great Northern beers here, from Leeds’ North Brewing Co to Manchester’s Cloudwater Brew Co. They also scour the globe for the best international brews they can find, with over 300 beers available to take away. They have nine taps filled with fresh beer that you can take away in a growler to sup fresh beer at home.

Fuggle and Golding, 30 Leeds Road, Ilkley, Leeds, West Yorkshire, LS29 8DS. They’re open from 12pm to 6pm Wednesday to Thursday, 2pm to 7pm on Fridays and 12pm to 5pm on Saturdays for takeouts and click and collect orders. You can also get home delivery online.