Where to Play Shuffleboard in Leeds

Get your shuffleboard on at these Leeds bars. 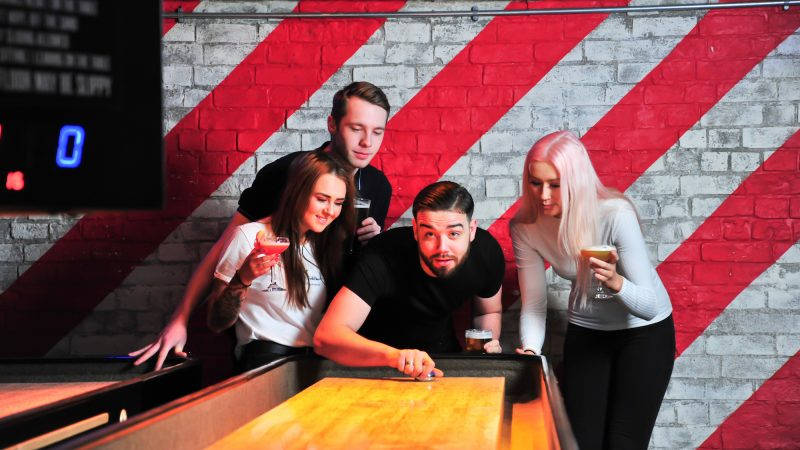 A mix of curling and bowling that you can do down the pub, shuffleboard is more than just a sport, it’s an art. Will you come out top at these five bars?

Whether you’re an absolute beginner or a seasoned pro, shuffleboard is a pub game that can be enjoyed by everyone. The aim of the game is to drift your puck down the long table and into the high-scoring zones to beat your opponents. All you need is a sand-dusted table, weighted pucks and a pint to go with it – luckily, there’s five great bars in Leeds where you’ll find exactly that, so go on, give it your best shot. If you fancy a late-night game of shuffleboard with a proper party atmosphere, head to Roxy Ball Room. Both their Merrion Street and Boar Lane bars have two 18-foot tables for you to play on. Grab a craft beer or cocktail from the bar before giving it your all to a soundtrack of indie and rock classics. Hour-long games start from £12, but if you’re in a large group, you can hire out the entire shuffleboard area for £24 an hour at both venues. Situated at the top of the Northern Quarter, BrewDog is one of the top dogs when it comes to shuffleboard in Leeds. This is your chance to play in a cool industrial-style beer hall with a craft beer in hand. They have three 22-foot tables downstairs, with a few vintage arcade machines and pinball tables to play in between games. It’s £10 for one hour and you can play for up to two – just make sure you book in advance to secure your slot. Why not pair your game of shuffleboard with street food? Trinity Kitchen is home to two 16-foot tables from SHUFL, the UK’s no.1 shuffleboard brand. A 30-minute game is £5, but you can bump it up to a two-hour session for £20. You can book in advance online or just rock up on the day, it’s up to you. You’ll have the bonus of being next to a self-serve Beer Hawk wall – it has five rotating craft beers on tap, with the likes of Camden Brewery and Goose Island. The Head of Steam on Park Row has a dedicated gaming area with two tournament-standard shuffleboards. It’s free to play, but if you want to book the whole area, you’ll need to pay a deposit in advance. Before you get on one of their tables, head to the bar where you can take your pick of incredible craft beers and real ales from around the world. And when you’re done, they even have arcade games and pinball machines to keep the competitive action rolling. A buzzing live sports bar in the heart of the city centre, The Box is a great spot for a game of shuffleboard. They have two 21-foot Maplewood European tables at the back of the bar with its own screens so you never have to miss a minute of the big game. To secure your slot, you can book in advance or simply turn up and see if there’s a free space. Hour-long games are £15 and there are no restrictions, so you can continue to pay by the hour.