Leeds Is Famous For Its Shopping Arcades And Here’s Why 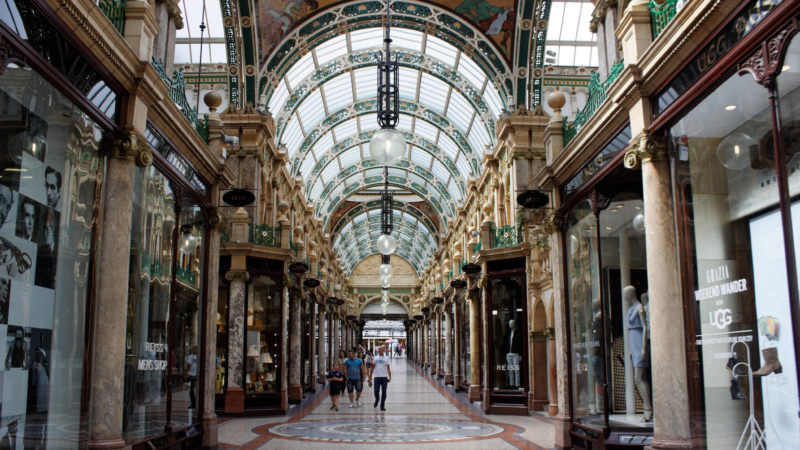 Leeds is a shopaholic’s paradise and its historic arcades are a key part of the city’s charm. They offer a shopping experience that’s full of character, where a fantastic mix of local independents and nationally renowned brands come together in beautiful surroundings. Their rich heritage has been kept alive, with the ornate Victorian architecture being beautifully preserved across the decades. With so much to discover, it’s time to explore the city’s arcades.

Named in honour of Victoria’s Golden Jubilee, Queen’s Arcade is a charming Grade-II listed building that’s stood on Briggate since 1889. It was designed by London arcade-guru Edward Clark and unlike the city’s other arcades, it was once home to a hotel as well as the usual shops. While the hotel is now gone, the arcade itself still boasts the impressive four-storey frontage that once housed it. It was given a complete refurbishment in 1994, but you can still see many of the original features, including ornate cast-iron arches, a curved balcony and a classic glass roof.

Queen’s Arcade is home to big names like Levi’s and Office alongside an array of incredible independents. Take Accent Clothing, for example – it’s a family-run clothes shop that has been plying the city’s fashionable folk with designer wear for over 30 years. There’s also Aladdin’s Cave, a well-established vintage jewellery shop that sells everything from pearl necklaces to classic pocket watches.

Built in 1878, Thornton’s Arcade was the first of many shopping arcades in Leeds. The neo-gothic structure was designed by George Smith for its namesake Charles Thornton, a Yorkshireman who had the bright idea of covering one of Briggate’s narrow shopping alleys. Thornton was a colourful local character who owned the City Varieties Music Hall, so Smith wove plenty of theatrical eccentricities into the arcade’s design, like the tall gothic arches, lancet windows and decorative winged lions. Not to mention the famous Ivanhoe Clock, which has a band of figures from Robin Hood striking the bell every quarter.

The arcade is a beloved attraction in Leeds and not just because of its quirky design. It has a fantastic selection of big brands like Starbucks and Dune as well as some of the city’s best independents. There’s Welcome Skate Store, a one-stop shop for all your skating needs, as well as OK Comics, one of the best comic book stores in the country. 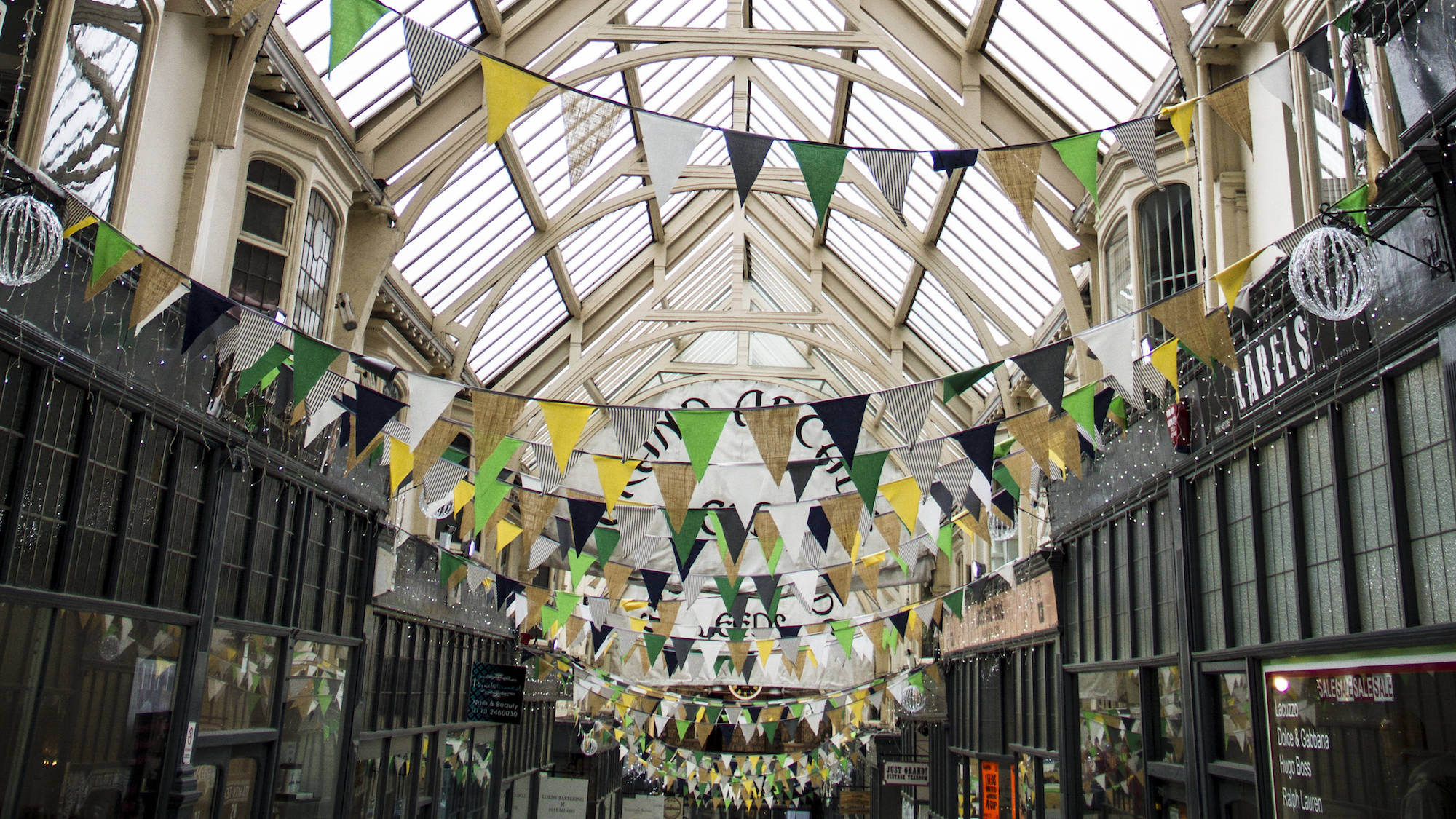 Grand Arcade is a little bit different. It may be one of the prettiest shopping arcades in Leeds, but these days it’s less focused on shops and more focused on hospitality. It was designed by local architects Smith & Tweddle in 1897 and connects two quaint Victorian shopping streets under a glazed roof. Sat at the heart of the city’s thriving Northern Quarter, with the ever-popular Merrion Street next door, it’s a must-visit. Colourful bunting is strung from shop-to-shop and the unique Potts Clock adds to its charm – it’s an animated time piece in the shape of a castle, with two knights to strike on the quarter and four more appearing on the hour.

The intriguing architecture isn’t the only reason this arcade is so special – it’s also a treasure trove of independent shops, restaurants and bars. Our Handmade Collective is a particular favourite, selling crafts from Yorkshire designers, while Bridal Emporium has all your wedding needs covered. And with the quaint Just Grand! Vintage Tearoom, rock ’n’ roll dive bar Santiago’s and secret jazz den The Domino Club, your post-shopping pitstop is sorted. 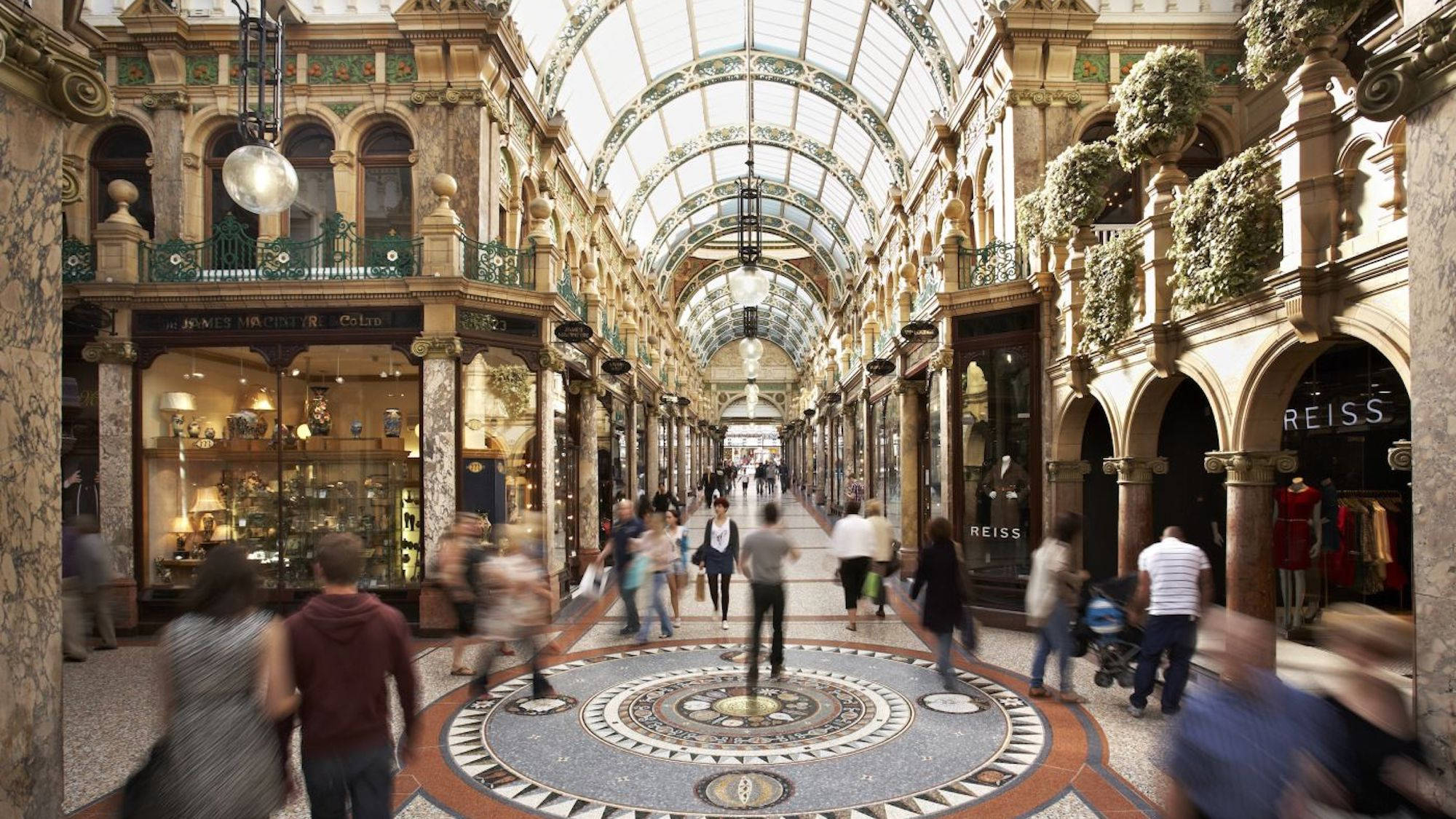 Victoria Quarter is the most famous shopping arcade in Leeds, attracting people from across the world to marvel at its architectural beauty and shop in its exclusive stores. This spectacular Grade-II listed landmark was designed by Frank Matcham, the architect behind the London Palladium and 200 other theatres. The arcade is full of theatrical grandeur, in the marble columns, pink terracotta facades, gilt mosaics and wrought iron detailing. Most dramatic of all is the stained glass roof – the largest in Europe – which is surrounded by detailed murals. It’s a rather glamorous alternative to the slaughterhouses and slums that once stood here.

The arcade’s original beauty has been richly preserved, with the traditional mahogany shop-fronts still there today. Behind them, you’ll find a hub of luxury fashion, with over 75 high-end brands spread across its three sections. There’s Louis Vuitton, Mulberry, Reiss and a huge five-floor Harvey Nichols, which shoppers flock to from miles around.

The city’s newest shopping arcade is Victoria Gate, a lavish £165 million development that helped to secure the city’s place as the retail capital of the North. It was designed by architecture firm ACME, who took inspiration from the city’s existing arcades. The curved black shop fronts with gold gilded lettering are a modern take on the traditional Victorian style, which you can see in the Victoria Quarter. The huge statement glass roof, made from 1,000 diamond-shaped glass panels, also takes its lead from its sister arcade. The result? A seriously glam feel, topped off by granite herringbone floors.

There’s over 42,000 square metres of retail and leisure space here, with famous designers like Tommy Hilfiger and Calvin Klein side-by-side. But they’re not the only big names that Victoria Gate has brought to Leeds – exclusive shops like Anthropologie, The White Company and Hackett London can all be found here. The North’s flagship John Lewis store also calls this arcade home. It’s a five-floor behemoth that covers homeware, tech, clothing, jewellery and even boasts a Clarins spa.

Central Arcade is one of the more modern shopping arcades in Leeds. It opened in 2012 after a £3 million transformation of the old Market Street Arcade. Architecture firm Archial NORR gave the area a new lease of life, using light colours and plenty of glass to create a bright and airy shopping space that joins Briggate to Central Road. The spacious arcade is split across three floors, with loads of niche boutiques to explore.