The best things since sliced bread. 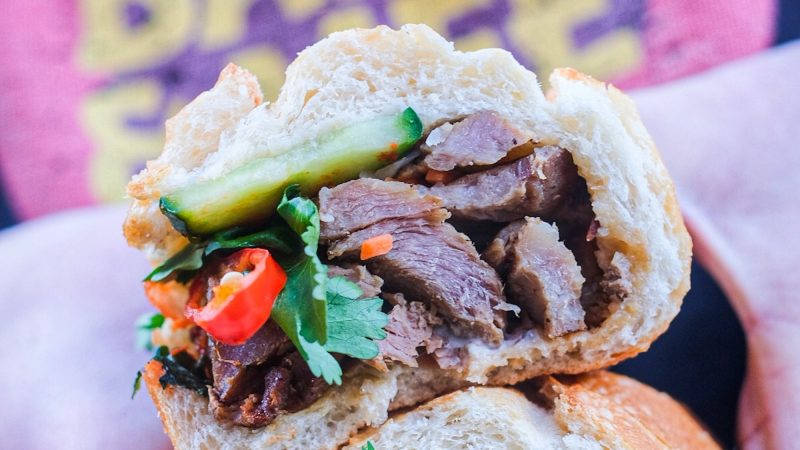 There are perks to being back in the office, including the chance to win incredible prizes for the whole team. From slap-up burger lunches to cocktail masterclasses at your desk – find out what’s up for grabs this week.

Love a good sandwich? Then this is your ultimate to-do list.

These are the sandwiches of our carb-obsessed dreams. Think flatbreads, ciabatta, sourdough, baguettes and perfectly soft sliced white. All are stuffed with creative and classic fillings, from melty cheese and crunchy breaded chicken to perfectly cooked falafel and fresh crisp greens. Leeds has got loads of great sandwiches on its roster – and you need to try them all.

Falafel Wrap at The Falafel Guys 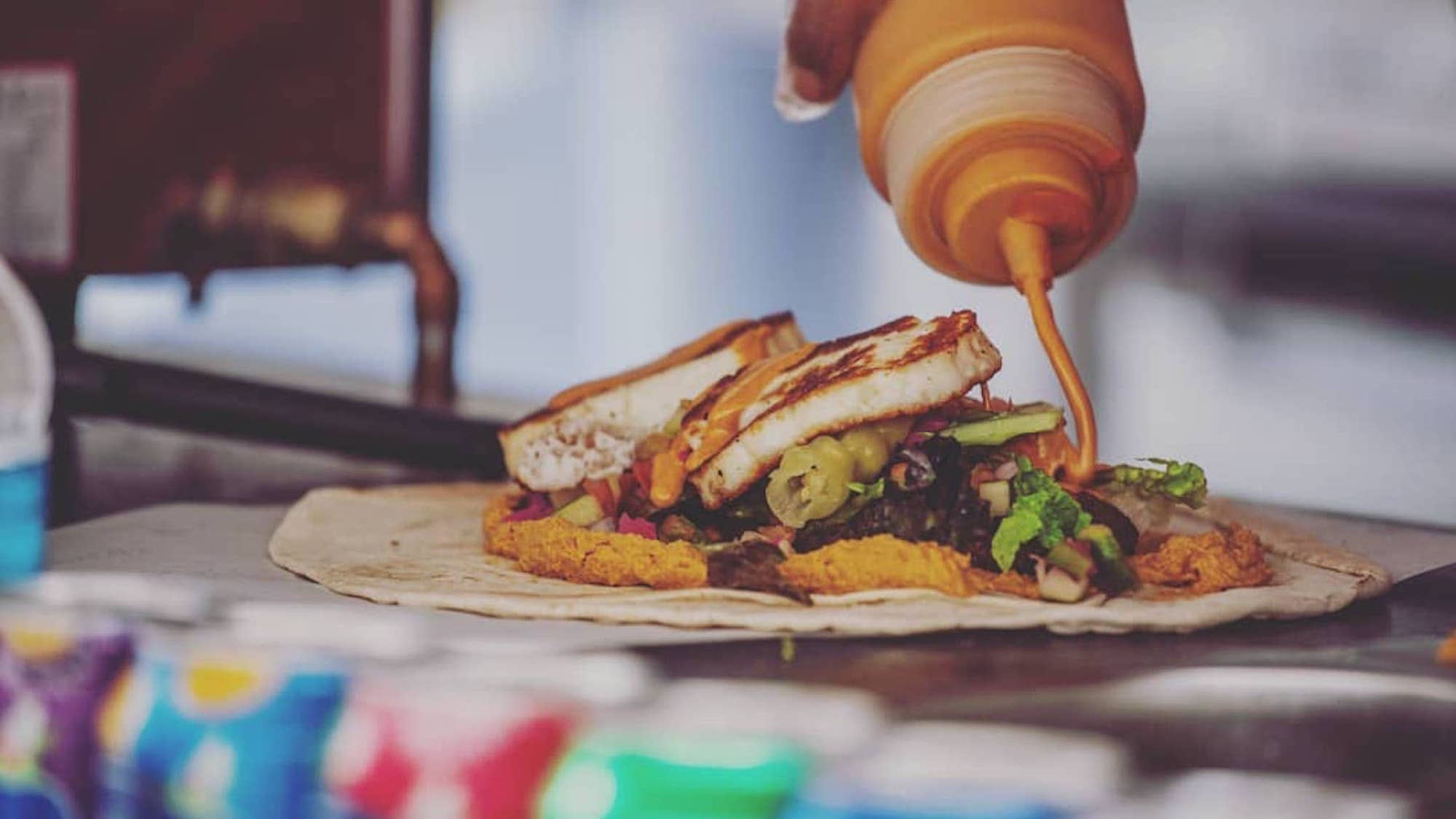 If you haven’t yet wrapped your lips around a Falafel Wrap from The Falafel Guys, you haven’t lived. We’re talking golden balls of perfectly baked yumminess that keep people returning again and again – and then you’ve got everything else! Your falafel is accompanied by homemade hummus, fresh greens, chilli sauce and more. But that’s not all, you can also stuff your wrap with grilled halloumi and chicken shawarma. 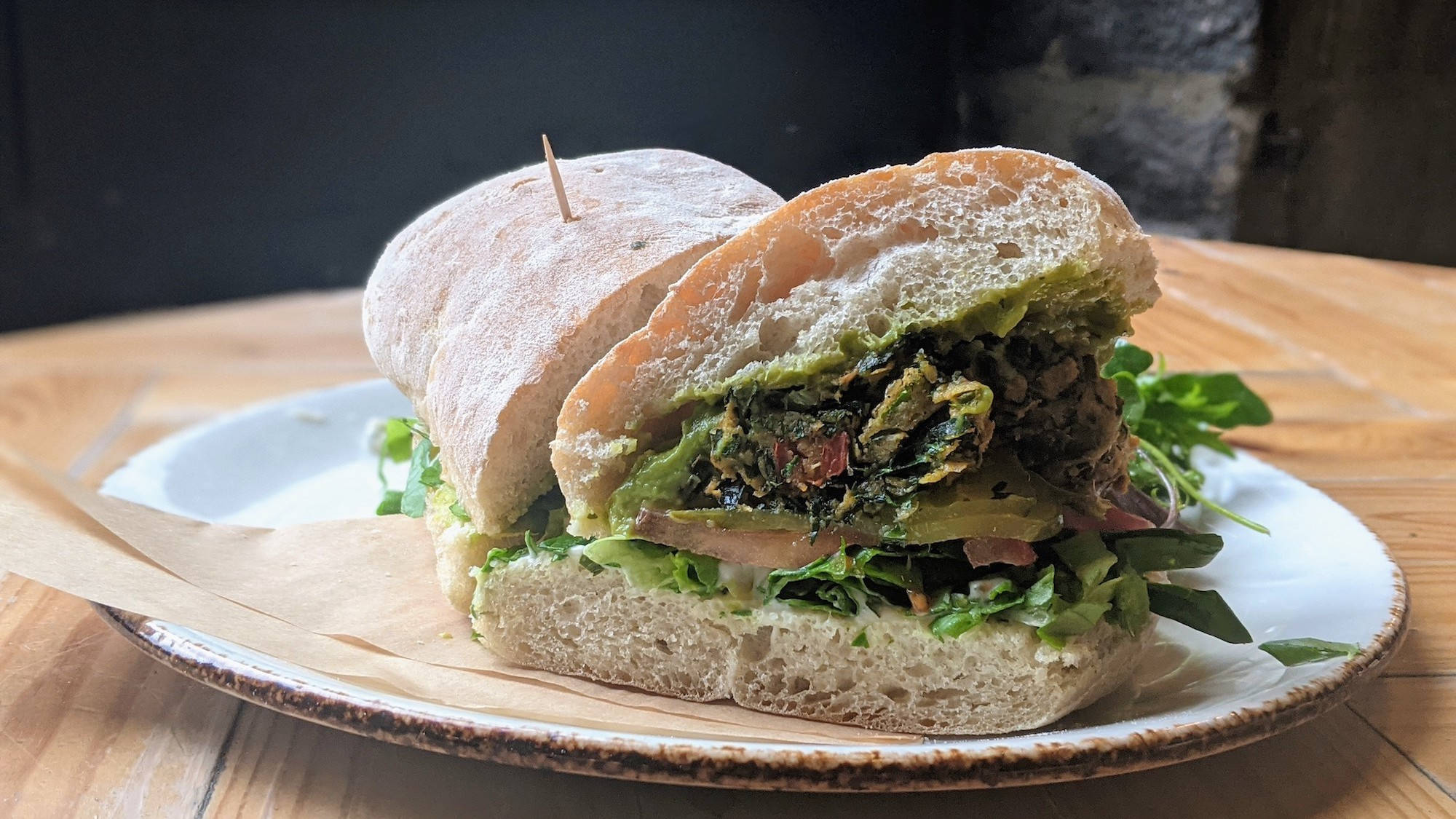 The Vegan Club from Water Lane Boathouse has to be one of the best sandwiches in Leeds for veggies and vegans. It all starts with a spring green bhaji, crispy on the outside, soft on the inside, and delicious to boot. Then, on the oh-so-chewy sourdough, they layer creamy mashed avocado, crunchy pickles, slices of fresh tomato and baby gem lettuce. It’s finished with the ultimate flourish – lashings of vegan garlic aioli. 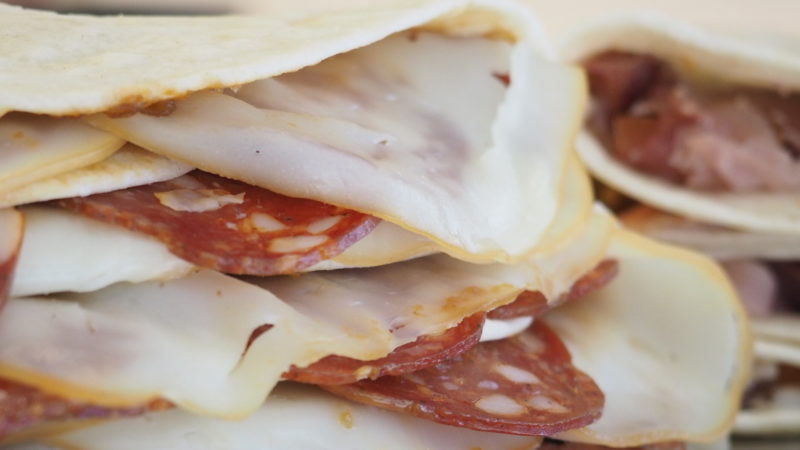 The Piadina Spianata from La Bottega Milanese is the perfect partner to a classic Italian coffee. It’s not a complicated sandwich – the flatbread is just flour, olive oil, salt and water – but it’s no less tasty when it’s stuffed with yummy fillings. The Spianata is smudged with Italian spicy sausage, layered with smoked cheese and chutney. It’s then grilled so it’s hot, crispy and gooey. Order two just to be safe… 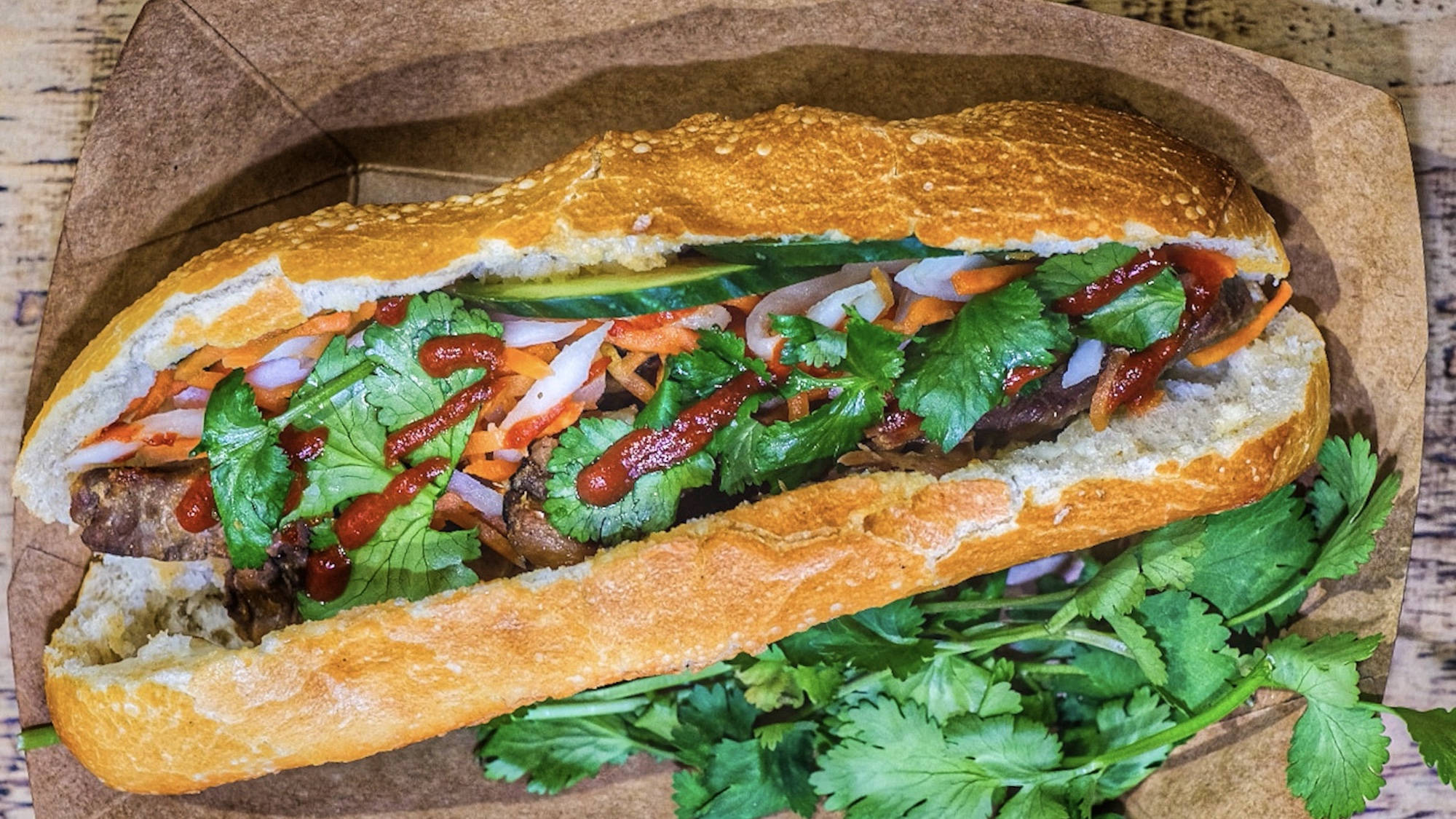 No list of sandwiches is complete without a banh mi. It’s an iconic Vietnamese sandwich and Banh & Mee truly serve up a corker with their BBQ pork version. It’s a freshly baked, crispy baguette, sliced lengthways and packed with all sorts of mouthwatering stuff. This one? It’s got sweet and spicy barbecue pork, tangy pickled veg, fresh herbs and a dash of hot sriracha sauce. Add a portion of fries to make a full meal and you’re set. 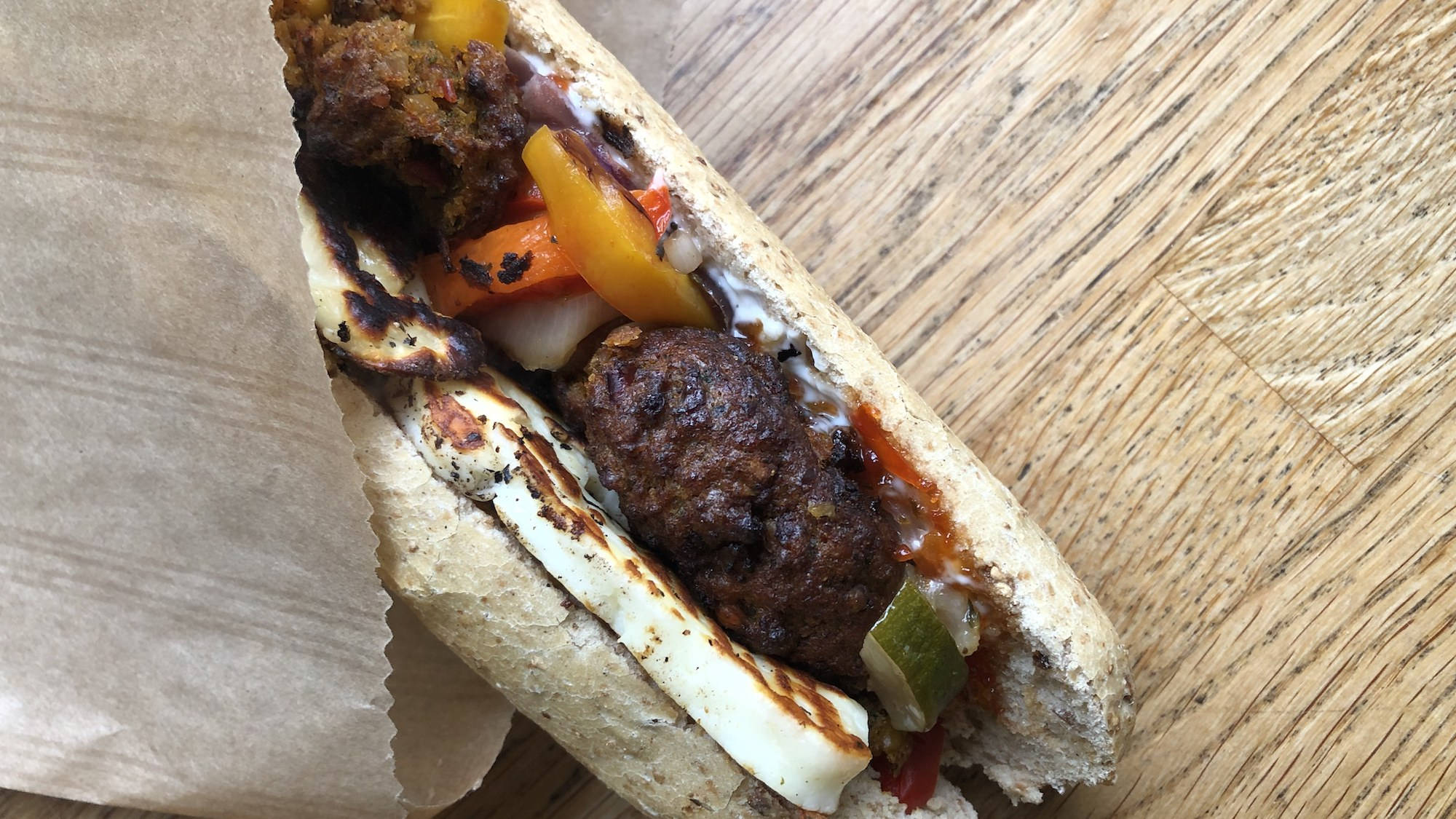 Brod is one of the best sandwich shops in Leeds. It’s got everything a great sandwich shop should have – including great veggie options. You can choose exactly what you want, but they’ve already come up with some great combos. Soft falafel, squeaky halloumi, Mediterranean veggies and chilli jam is a match made in heaven. All you have to do is decide which bread is for you. You’ve got all the usual suspects, but if we were you, we’d go for the chilli & cheese roll. 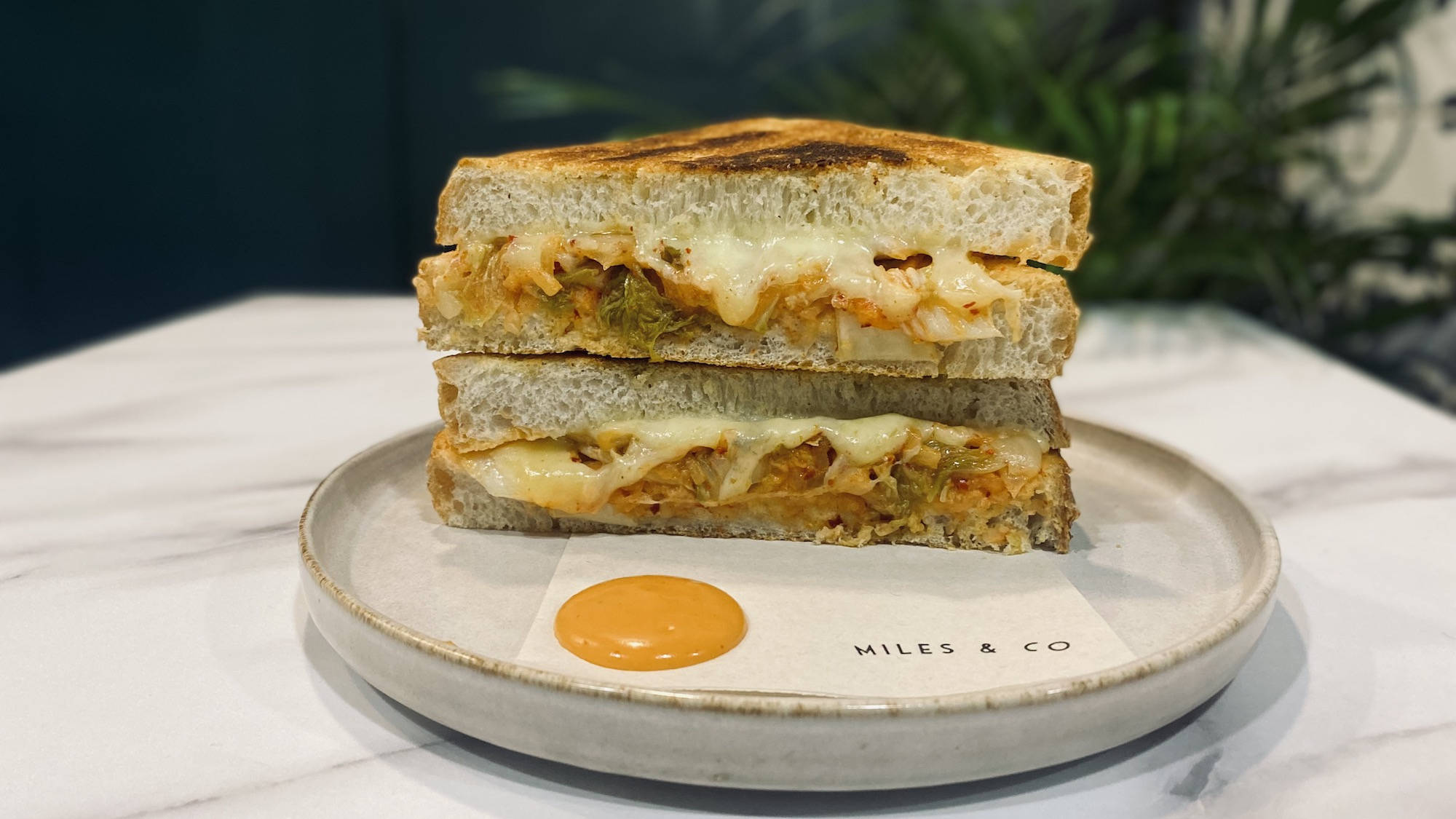 Miles & Co have perfected the grilled cheese at their place in Kirkgate Market. Our tip? The Kimchi and Spiced Mayo one. They take soft, white, farmhouse bread, layer it up with strong cheddar, crunchy kimchi and spicy mayo, then grill it ’til it’s golden and gooey. It’s a mouthful that hits all the right spots. Vegan? They’ll swap out the cheese and mayo for plant-based versions so you can enjoy the toastie delights too. 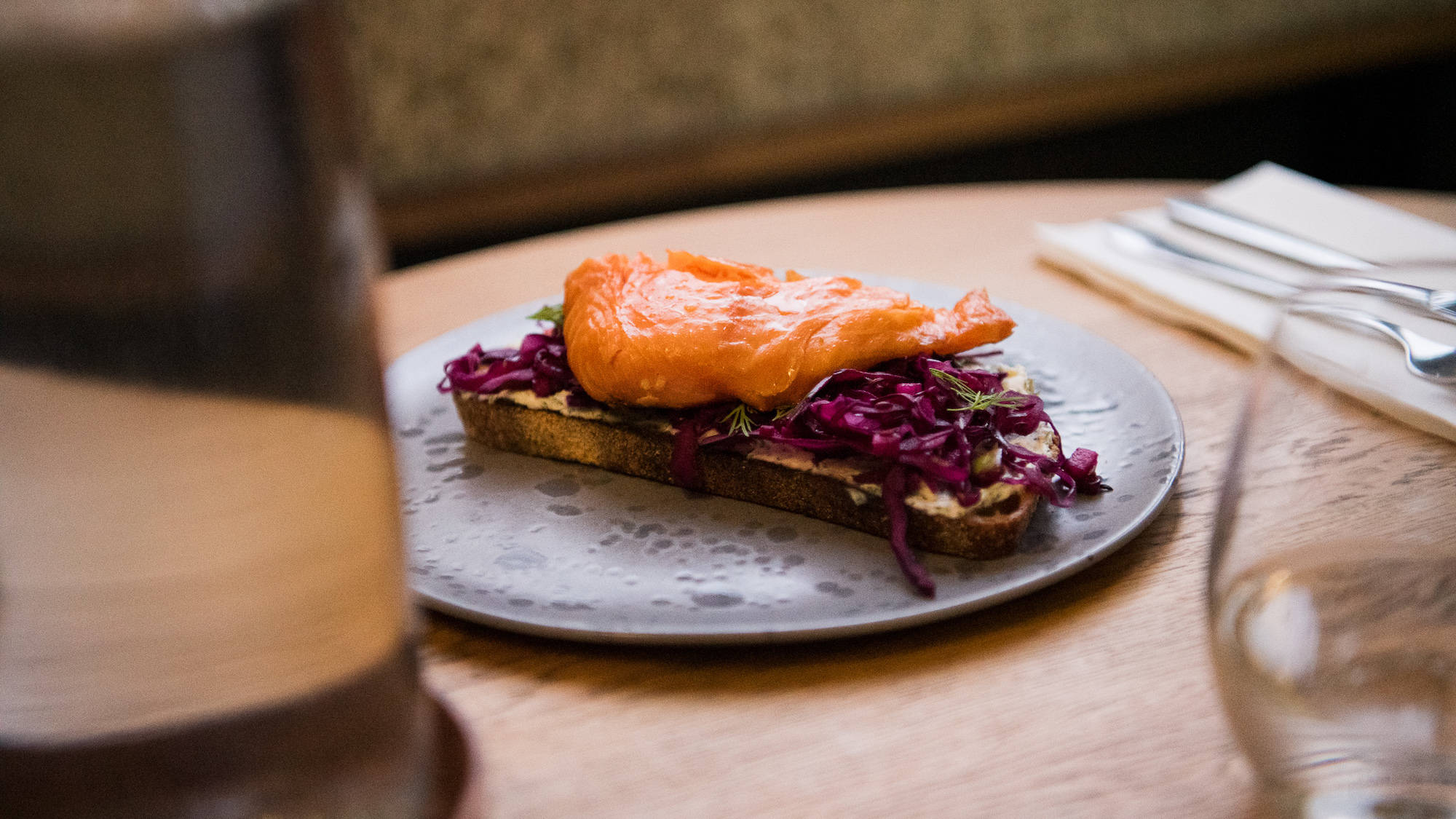 A what? A smorrebrod! It’s a traditional Scandi open sandwich made with rye bread and topped with yumminess. If you’ve never tried one, now’s your chance. Nordic restaurant FINT do their own version. Their Salmon Smorrebrod starts with toasted coriander seed bread and layers on brunkal (baked Swedish-style cabbage) and salmon gravlax (salmon cured with salt, sugar and dill). You can even add a poached egg on top for yolky joy. 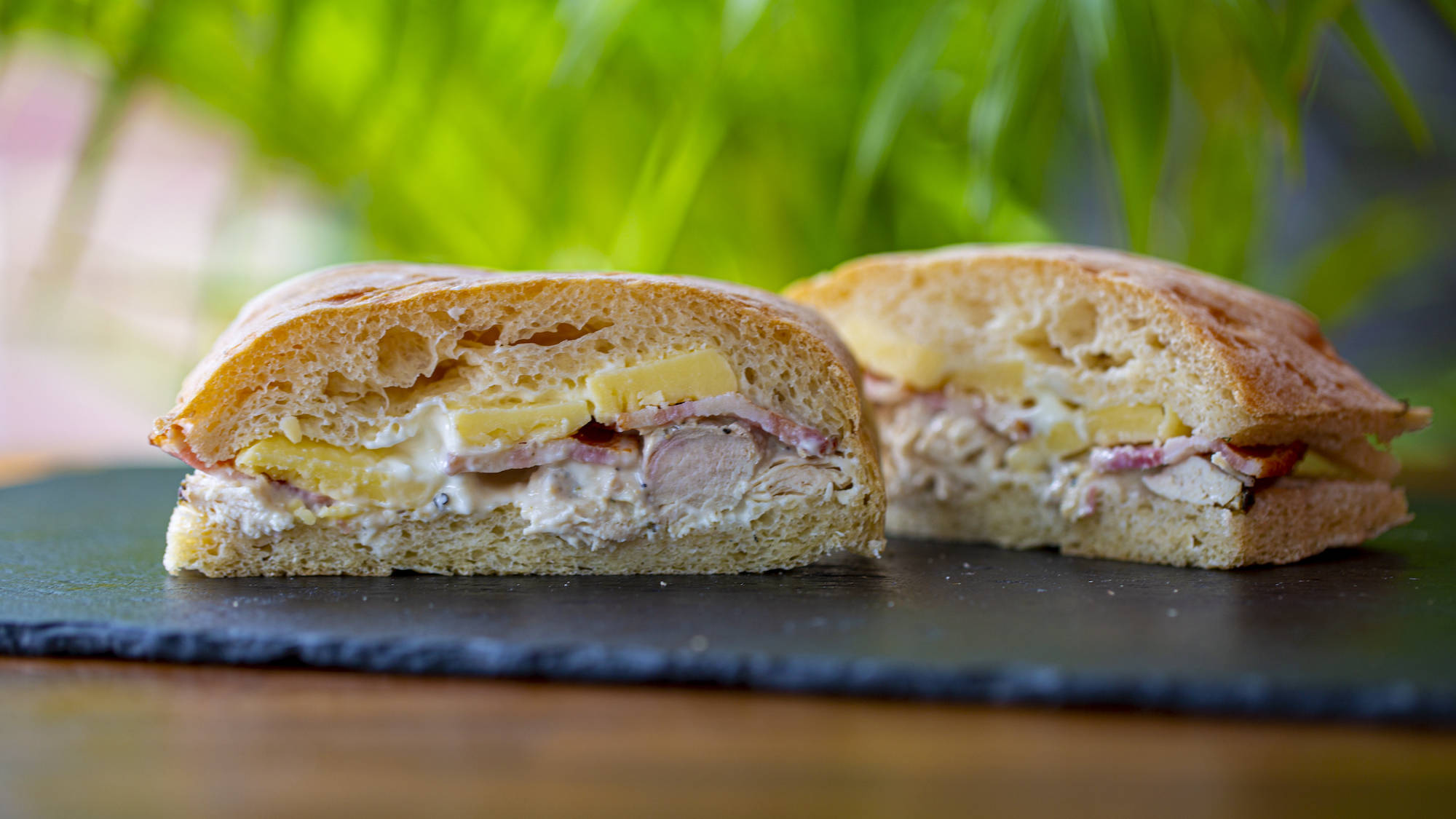 Cafe 164 is one of the best places to grab sandwiches in Leeds. They bake their own focaccia and ciabatta bread every day, with all the sandwiches being on one or the other. There’s a sea of sarnies just begging to be picked and everything is excellent, but it’s the classic combo of chicken, bacon and cheddar that should pique your interest. We’re talking strong cheese, crispy, salty bacon and chicken breast, slathered with Caesar dressing and mayo. 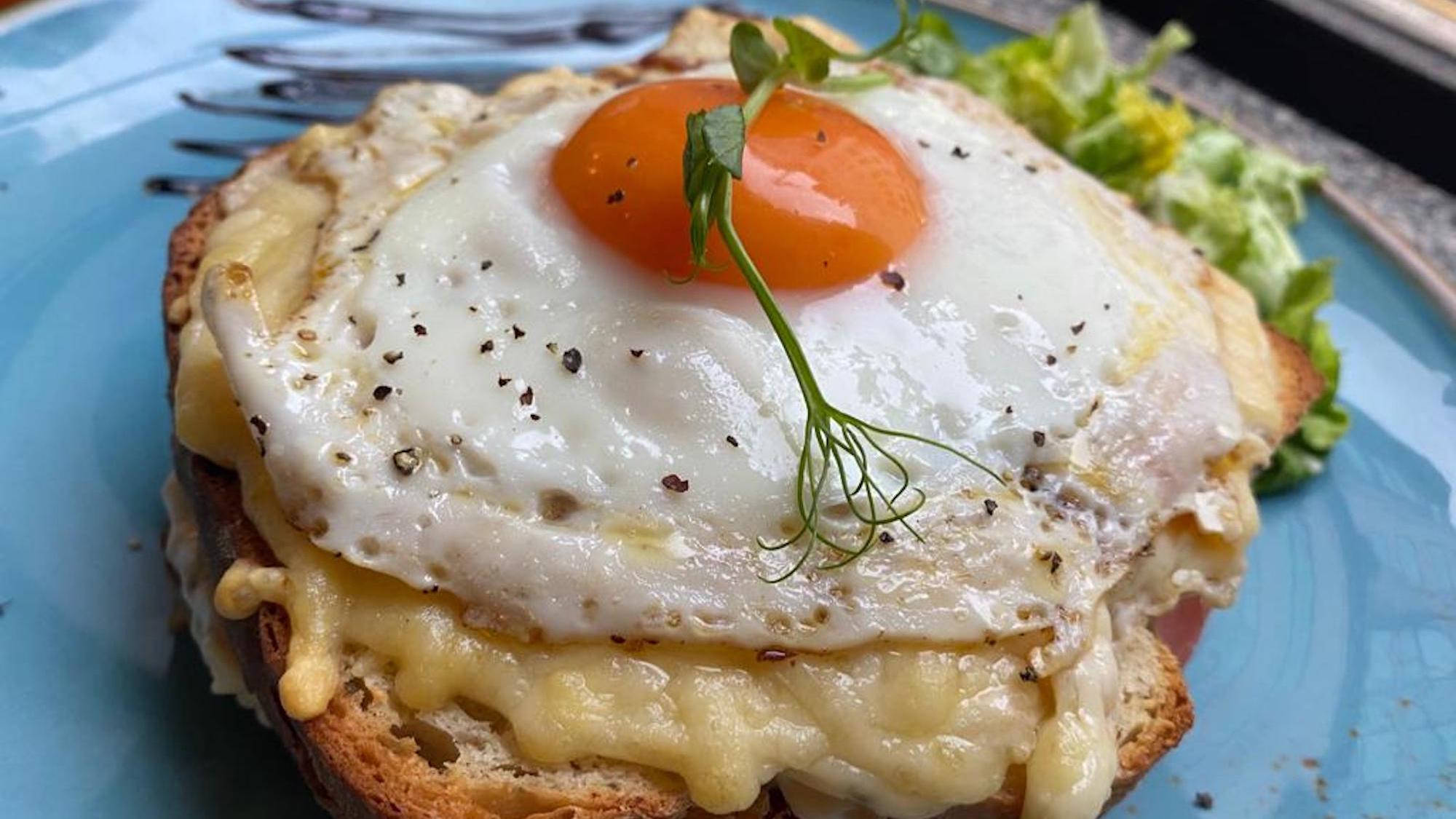 As the name suggests, Le Chalet is the place to stuff yourself silly with French delights. And there’s nothing more French than a Croque Madame. It’s rich and decadent, crunchy, gooey and an utter indulgence. This is not your average grilled cheese, oh no. Le Chalet bake their own bread, add cheese, ham and mustard, then top it with house-made béchamel sauce. And it doesn’t stop there – once it’s grilled, they pop on a crispy fried egg, ready for that satisfying yolk pop. 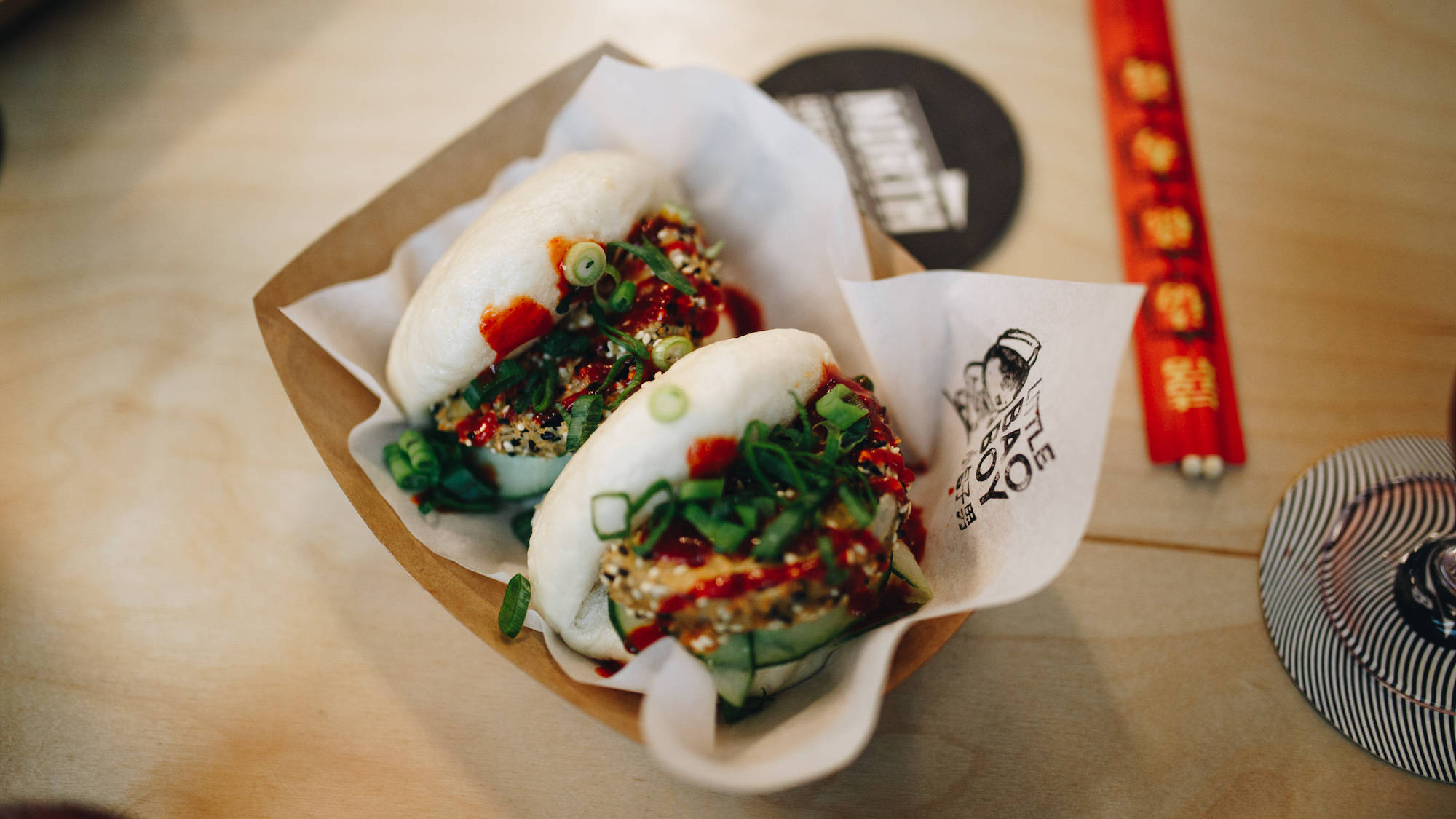 If, instead of your usual sandwich fare, you want something smaller, lighter, but just as tasty, then a bao bun is calling your name. Swapping sliced bread for steamed buns, Little Bao Boy stuffs them with all sorts of glorious ingredients. They dredge slices of aubergine in their own vegan buttermilk mix, coated twice in panko and sesame breadcrumb and deep fried until beautifully golden. It’s finished with a spicy sriracha sauce, iceberg lettuce and spring onion. 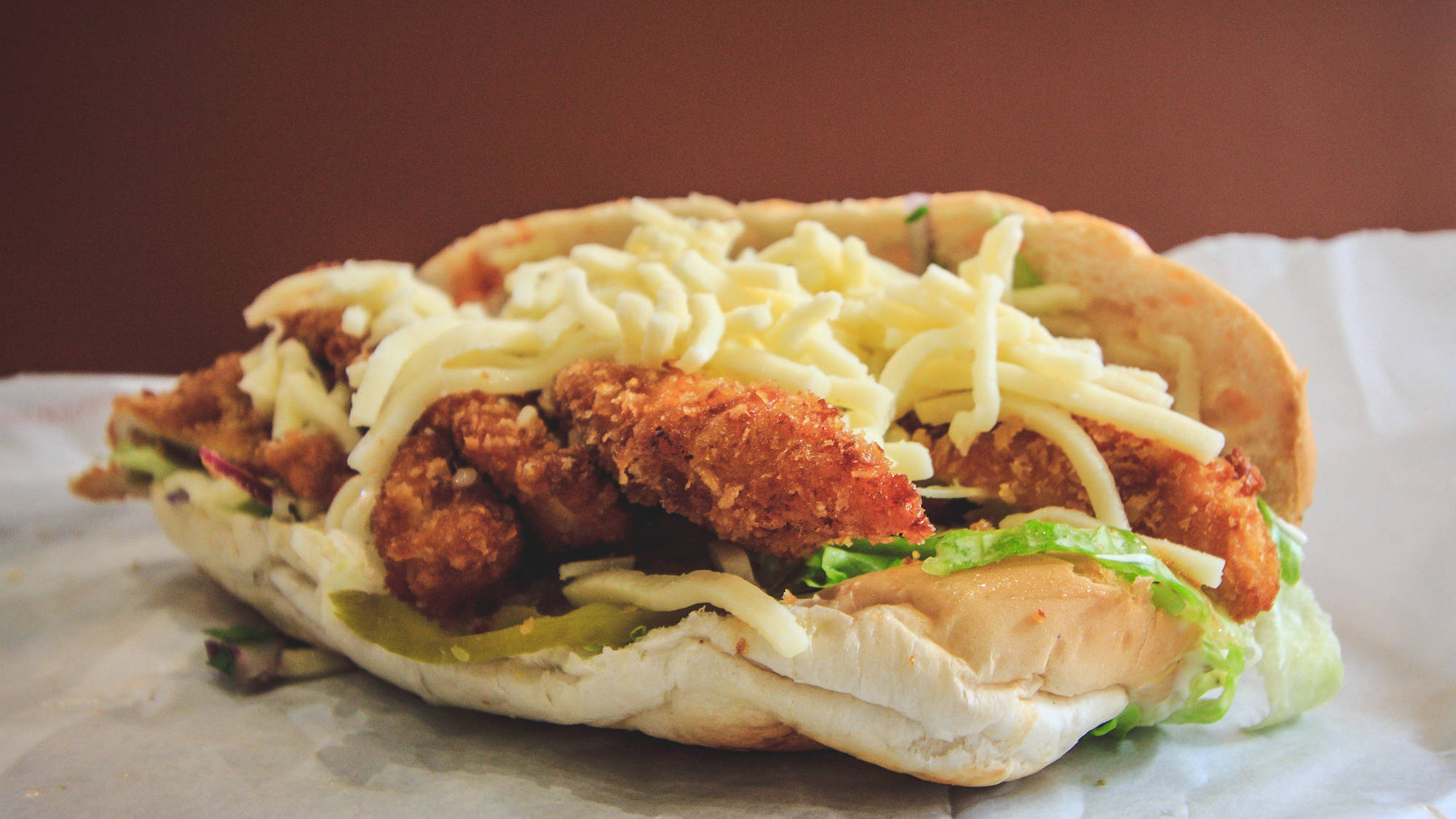 Follow your nose in Leeds and you’ll end up at the door of Sesame’s salad and sandwich shop. It emanates all the good lunchtime aromas, especially on a Thursday when the special is a Chicken Schnitzel Sandwich. Think thin slices of breaded chicken, fried until it’s crunchy and stuffed into soft bread. Add cheese, a heap of fresh salad, and maybe even some hot sauce to make it spicy. Pair with salad of your choosing from the salad bar for a lunchtime feast. 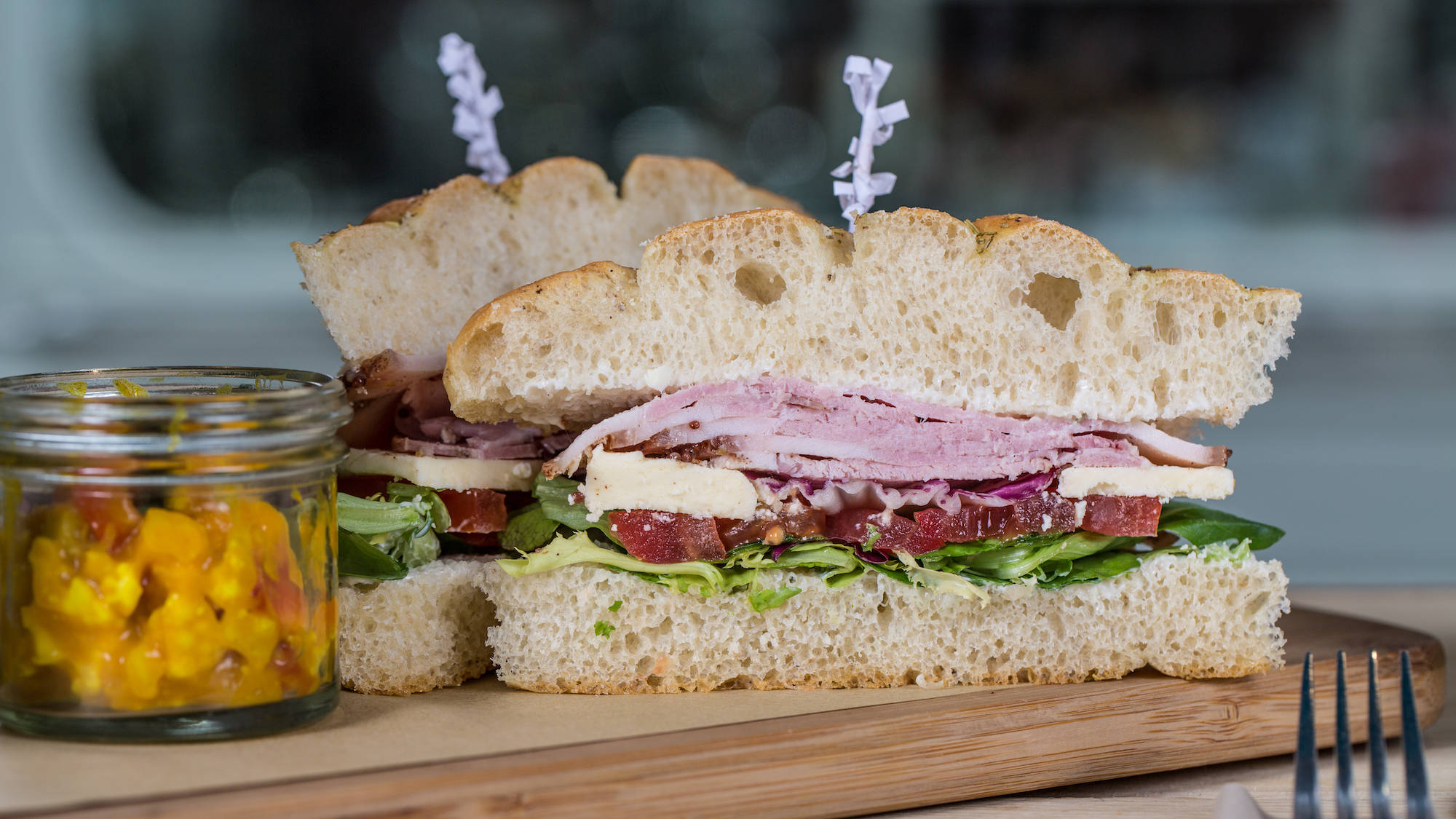 An indie cafe using locally sourced ingredients, Olive & Rye has a small but perfectly formed selection of sandwiches on their menu. They give you a choice of ciabatta, focaccia or sourdough as the carrier of drool-worthy fillings. Once you’ve decided, they stuff it with tender Cuban-style mojo pork, sliced ham, Swiss cheese and a crunchy gherkin. It’s finished with a moreish red onion chutney and yellow mustard. It’s a ham sandwich like you’ve never had before. 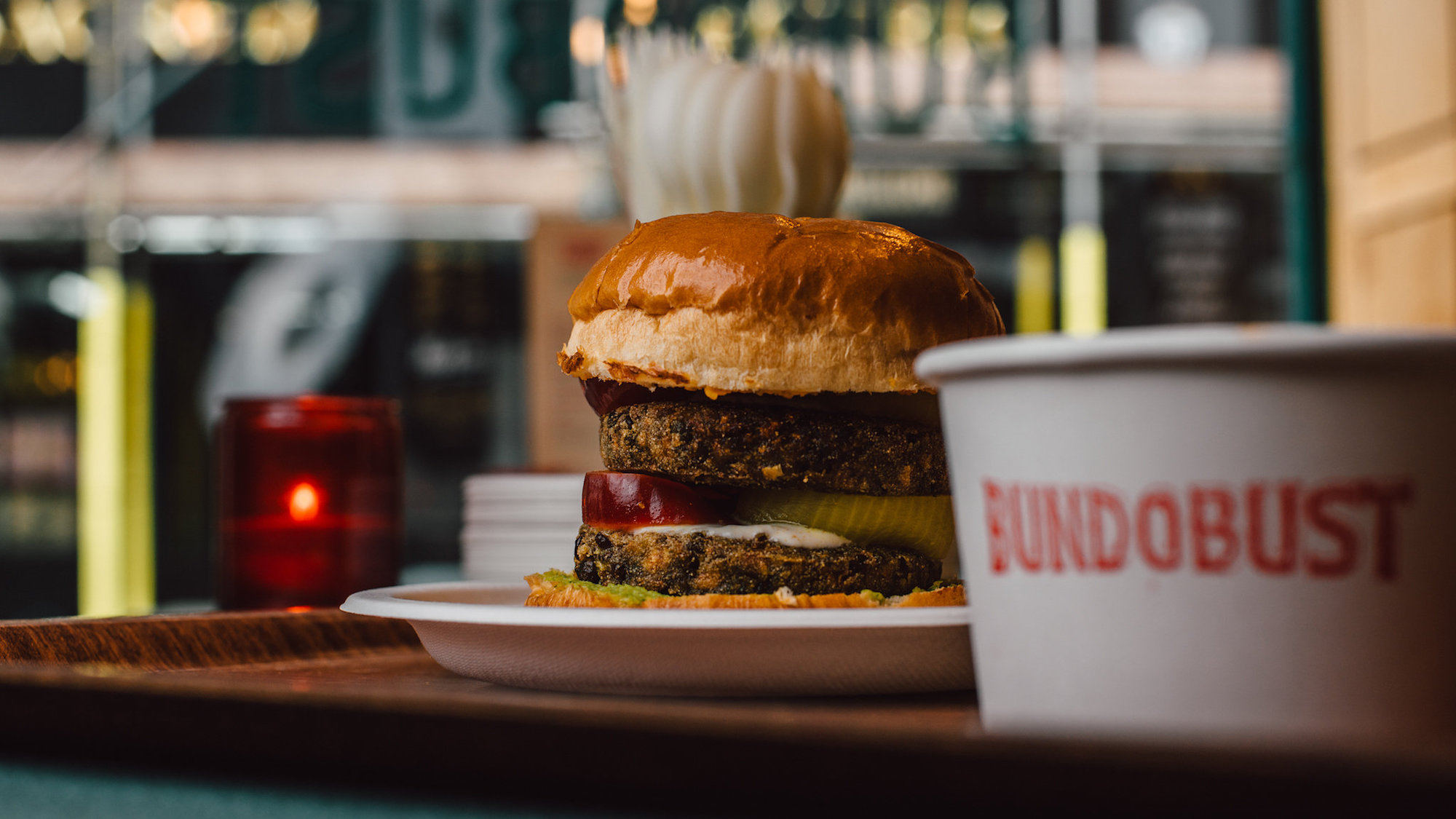 Somewhere between a burger and a sandwich, it’s time to introduce your tastebuds to the Bhaji Butty from Bundobust. Known for their incredible Indian street food, if it’s coming from Bundobust’s kitchen, it’s guaranteed to be mighty tasty. You’ve got a soft vegan brioche bun, with a mouthwateringly crispy onion bhaji in the middle. It’s topped with crunchy kachumber sambharo, desi ketchup and green chutney. Pair it with a side of battered okra fries and a craft beer. Bliss!

Ready to come back to the office? Want to get the team together again? We're giving you another great reason to make it happen! Enter our competition for a chance to win a team lunch you won't soon forget. Slap & Pickle will deliver ten epic lunches to your office, including a burger, chips and a side – get in!