This is why robots are the future. 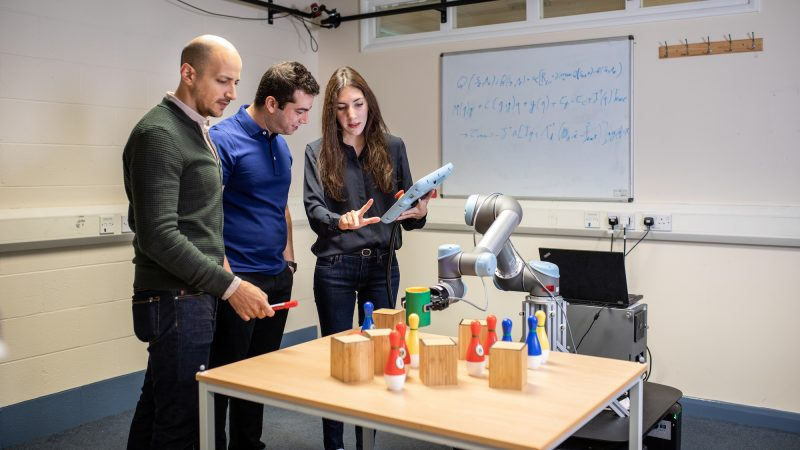 These research projects are at the forefront of robotics innovation…

From machines that learn from their mistakes to flying 3D printers that repair potholes, the University of Leeds is working on a string of exciting robotics projects that could change the world as we know it. They’re surprisingly diverse, incredibly advanced and undeniably cool, so without further ado, let us introduce you to the future of robotics. The University of Leeds is developing robots that learn on the job. These service robots, which are designed to perform dirty, dull or dangerous tasks, will use artificial intelligence to learn from experience, just like a human.

They use a concept called reinforcement learning. When the robot does something good, it’ll be given a reward signal, so it can measures its own performance through the quality of each action.

This means the robot can use what it’s learned in previous situations when deciding how to tackle a new problem. In future, service robots will be required to be versatile, performing a continuously increasing number of tasks, and reinforcement learning is the key to making this happen. Everyone’s worried about robots replacing humans at work, but what about just helping them? Researchers at the University of Leeds are developing a robot that can move around and pick up objects from cluttered places, like the back of a shelf.

The robot was inspired by humans. They used data from three points on people’s arm, their elbow, wrist and shoulder, then combined it with machine learning to produce a set of rules for the robot to follow. The robot can then create a plan that mimics how a human would get around clutter, in essence, it thinks like us.

These robots could be used in places too dangerous for humans or in care settings to assist the elderly. “Ultimately, research into human-like physics in robots could allow us to get closer to bridging the robot-human skill gap,” Professor Tony Cohn, the man leading the research, explained. “By having robots that move in a ‘human-like way’, such collaborations will be easier for the human participants.” A swarm of miniature robots called ‘pipebots’, are being designed to go inside water and sewer pipes to inspect them for defects, like blockages and leaks.

“This can save us time, money, and most importantly, water,” Dr Viktor Doychinov, who works on the project, told us. The robots identify small leaks before they get bigger, find blockages before they cause sewers to overflow and pinpoint where the defect is so they can be repaired faster.

Viktor is working on making the robots communicate with each other, which is a challenge because they’ll have to work in empty, full and partially full pipes. Water pipes are the most challenging, because radio waves, our main method of wireless communications, are blocked by water. This leaves two options, the first is a combination of sound and ultrasound, while the second uses light. Both have their pros and cons, so Viktor is working on a hybrid the two. This project has it all. An innovative combination of robotics, nanoparticles, ultrasound and lasers is being developed to treat head and neck cancer, reducing the need for chemotherapy.

The technique is based on nanoscale metallic particles that attach to cancerous cells. “Once they’ve attached, the treatment system is able to activate the particles by exposing them to simultaneous ultrasound and laser illumination, which causes bubbles to form around the nanoparticles,” Dr James McLaughlan, the man leading the research, explained. These bubbles burst, emitting an ultrasound signal that allows researchers to pinpoint the cancer sites very accurately.

Using the same system, they can destroy the cancer by essentially cooking it using high-intensity focused ultrasound (HIFU), a method already in clinical use for treating cancers. A waterproof robotic arm, developed by ST Robotics, will sit alongside the patient to make the treatment semi-autonomous. How about a robot inside your shoe? A sensor developed by the robotics department at the University of Leeds can help patients with chronic foot conditions.

Their sensory insole can be worn by anyone at risk of developing a diabetic foot ulcer (DFU). The sensing technology will assess the condition of a patient’s foot over time. It can be used to warn doctors, so they can treat the condition before it turns into a foot ulcer – which could save the NHS £650 million per year.

The system was developed with the input of doctors from Chapel Allerton Hospital. “Our team work closely with the hospital to improve the technologies,” Dr Peter Culmer, the man who led the research, explained. “It is through working together this closely that innovation and relevance to clinical practice is possible.” Robots can be used to go places too dangerous or too difficult for humans to go. Exploration robots can find trapped victims, gather information on terrorist threats or inspect inaccessible industrial plants.

They can also be used to explore archaeological sites – in fact, a team from Leeds created a robot to go inside a previously unexplored section of Egypt’s Great Pyramid. The robot had to fit inside a shaft that was just 20cm by 20cm, called the Queen’s Chamber, then travel 60 metres inside it.

It found a stone blocking access to part of the shaft, got past it and revealed a chamber with intricate symbols on the floor. “Given the artwork, it is likely the shaft served a bigger purpose than acting as an air vent,” Professor of Robotics, Rob Richardson, who led the team, explained. “But what that bigger purpose was remains a mystery.” As part of the university’s exploration into self-repairing cities, they’ve developed flying robots that can repair potholes.

The asphalt printer combines a drone and a 3D printer with a custom extruder capable of melting asphalt. It will take photos of the road surface using a camera, digitise the picture and use this to detect cracks. When it finds a crack, it will land on the road and fill it with asphalt using the 3D printer. The aim is to repair these cracks before they turn into large potholes, saving time and money, while keeping roads from closing.

This invention is part of a University of Leeds research project called Self-Repairing Cities, which hopes to completely remove the need for any street works by 2050. “The project looks at how robots can help improve the natural environment in and around cities, and what robots can do to help with biodiversity in cities,” Viktor Doychinov, who works on the project, told us.