One of Manchester’s finest restaurants has crossed the Pennines. 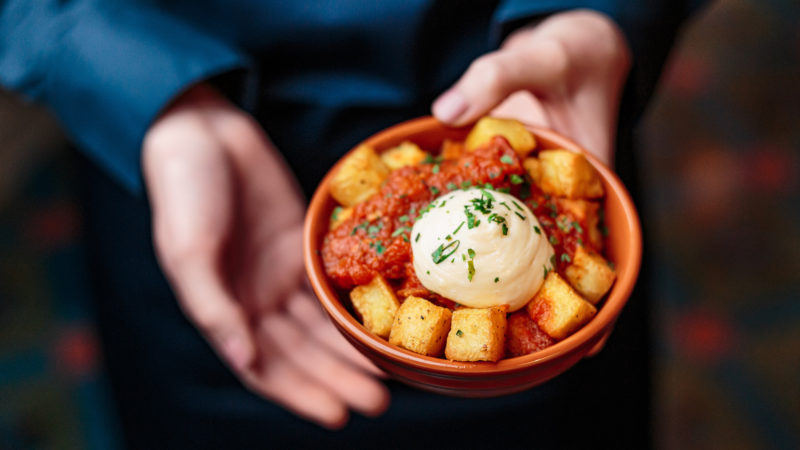 When Jamie’s Italian shut on Park Row last year, it created an exciting new opportunity in a beautiful building. Enter El Gato Negro, the much-loved Manchester restaurant from renowned chef Simon Shaw. He’s brought his acclaimed take on Spanish cuisine across the Pennines to 35 Park Row, where you can tuck into a menu of creative tapas dishes.

It’s something of a homecoming for Simon. He was the first Head Chef at Harvey Nichols when it opened in Leeds two decades ago and now he’s returned to where it all began. It’ll be the first time the city has enjoyed his culinary flair since he left for London in 1998. It was here, while hosting a series of Spanish tasting menus at Harvey Nichols’ Knightsbridge restaurant, that he fell in love with Spanish food. When it came time to open his own restaurant, he moved back up North to the village of Ripponden, before relocating to Manchester where they now have two successful restaurants. But Leeds inevitably called him home.

“I spent a lot of really happy times in Leeds and I believe it’s a very vibrant city and it’s on that wave again, I feel that it really is. When we opened Harvey Nicks back in 1996 Leeds was fantastic then, it was so vibrant at that time. A lot’s happened, it’s a bit like a second coming again, I feel that vibe again and I really wanted to be part of that,” Simon told us.

They’ve been looking for a venue in Leeds for 18 months and it was love at first sight when Simon clapped eyes their new digs. It’s split across two floors and you can see the chefs working their magic in the open kitchen. The big arched windows drench the room with natural light, creating a bright, airy space where you can enjoy a bite. They’ve stripped back the walls to reveal the original brickwork and covered it with modern art that really brings the place to life. The result is a restaurant that’s undeniably modern and yet it has a real sense of character.

They’ve created the perfect space to tuck into a creative menu of Spanish tapas. Simon personally designed every dish on the menu, with the help of local chef Oliver Brearley, and they all use the very best locally-sourced ingredients. They suggest five or six dishes to share between two and each one will be cooked to order.

You can kick things off with their Para Picar, which roughly translated means ‘to pick at’. They’re designed to be shared at the table while you wait for the tapas to come. Try the Padrón Peppers sprinkled with Halen Môn sea salt or the Deep-fried Monte Enebro with orange and rosemary honey. You can even get their take on a Bikini, a classic Spanish toasted sandwich filled with jamón serrano, Manchego and truffle butter.

They have plenty of tapas classics, like Meatballs in a tomato fritarda sauce, Patatas Bravas with aioli and Tiger Prawns in a chilli, garlic and lemon butter. But you can also try something a little more adventurous in the form of their signature dishes. Their gooey Cauliflower Croquetas are exclusive to the Leeds restaurant and the Braised Ox Cheek comes with a celeriac puree and roasted button mushrooms that makes it positively unmissable.

If Simon has his way though, you’d be tucking into the two dishes he’s renowned for. “The Morcilla Scotch Eggs is Spanish black pudding with sausage meat and then a quail egg. It’s coated in Japanese panko breadcrumbs which gives it a lot of texture, and then it’s finished with mushroom duxelles, aioli and apple puree. It’s a really good-looking dish, very distinctive,” he told us. “And a dish we’ve just put back on the menu that was a staple in Ripponden is Syrian lentils. It’s influenced by the Moorish, Middle Eastern flavours and finished with coriander and lemon juice.”

The desserts are designed to be shared too. Tuck into classics like Mini Doughnuts with hot chocolate sauce or Chocolate Tart with orange Chantilly cream. They also have a few traditional Spanish desserts like the Tarte de Santiago, a traditional almond tart served with a generous dollop of salted caramel ice cream, and the Caramelised Vanilla and Banana Rice Pudding, which is a world away from your usual tin of Ambrosia.

The wine list has been sourced from independent producers and curated by their Master of Wine, Miles Cornish, to partner perfectly with whatever tapas you choose by bottle or glass. If you prefer cocktails, the menu is full of Spanish-inspired concoctions like the El Gato Negroni, a blend of gin mare, mango vermouth, cucumber and watermelon-infused Campari. If your favourite isn’t on the list, their bar staff will be more than happy to whip them up for you. Beer lovers aren’t left out either – you can get Cerveza El Gato, Estrella or 61 Deep Pale Ale on tap with plenty of international lagers and craft brews in the fridge.

El Gato Negro was worth the wait. They’ve taken over a beautiful building, put their own mark on it and created a delicious menu of Spanish tapas that will surprise you on every visit.