The Ultimate Guide to Going Out Near Leeds Train Station

From the train to the tap in mere minutes. 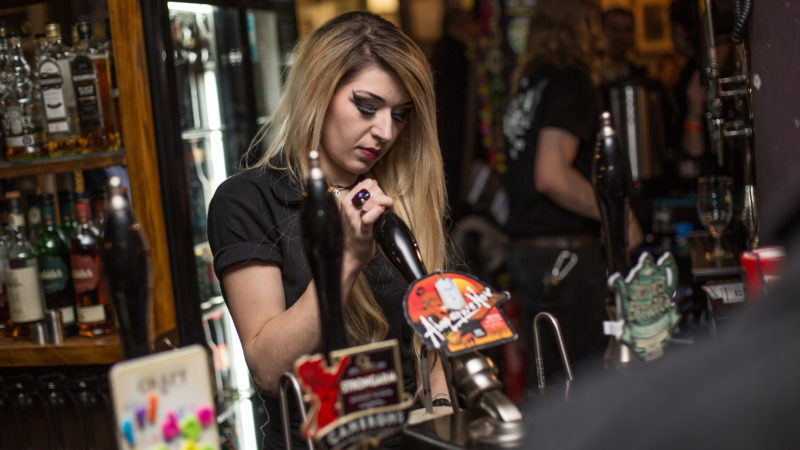 If you’ve just hopped off the train, you’re surrounded by bars, restaurants and more that make for an amazing night out.

There are loads of perfect pubs and places to eat near Leeds station, meaning you can come through the barrier and head straight for a wonderful time in the city centre. Craft beer, the charcuterie of your dreams and bar games late into the night all beckon. But with so much choice on offer, where are you going to go first? 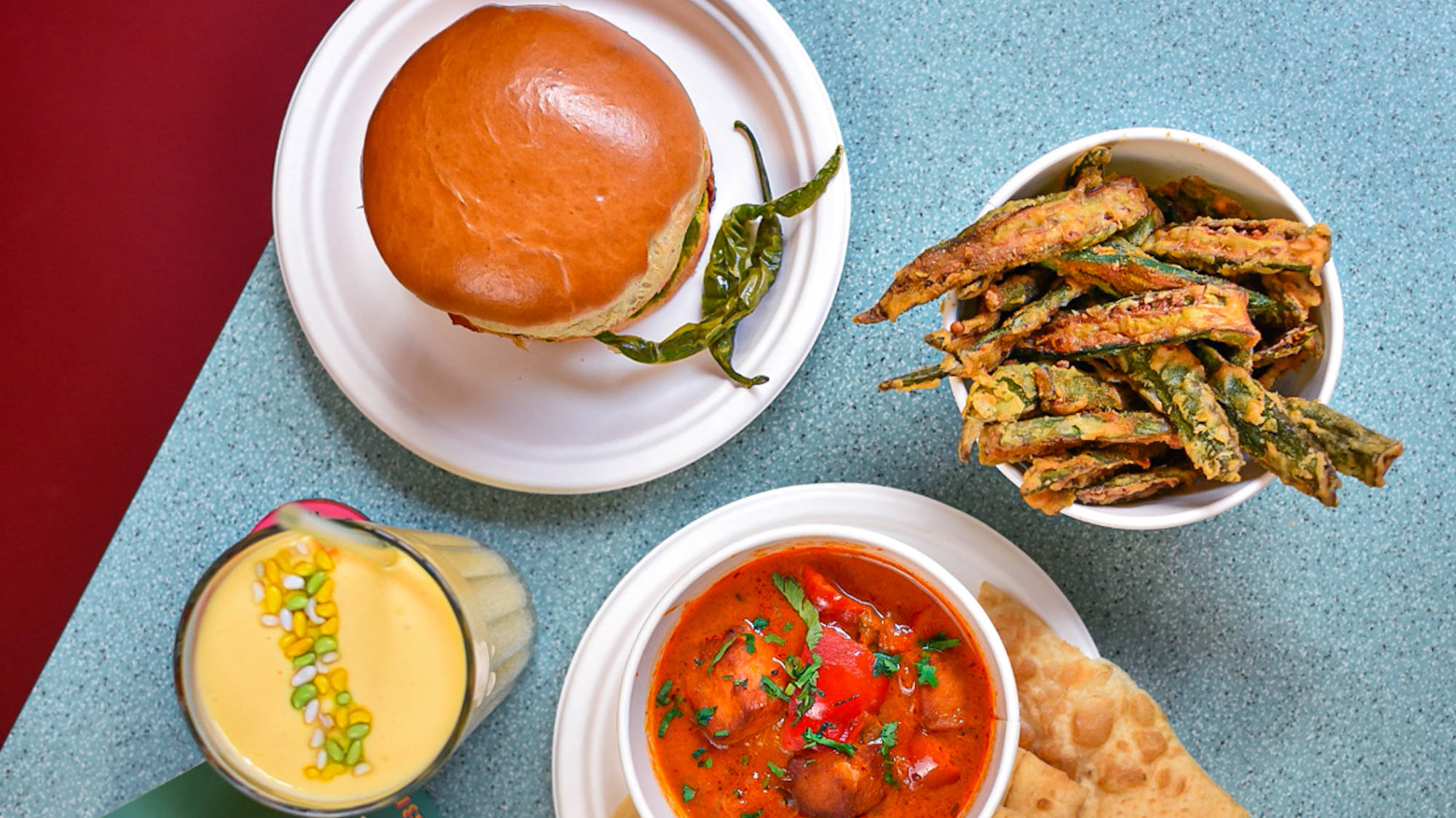 Bundobust manages the brilliant balancing act of fab food and brill beer. You can order from a dazzling array of craft beer, both draught and in cans, including their own brews such as the Bombay Dazzler wheat beer and a chai-spiced cider made with Hogan’s. The toothsome menu of meat-free Indian snacks such as okra fries, vada pav and egg bhurji make this one of the best places near Leeds station if you have vegan or veggie mates along for the night. 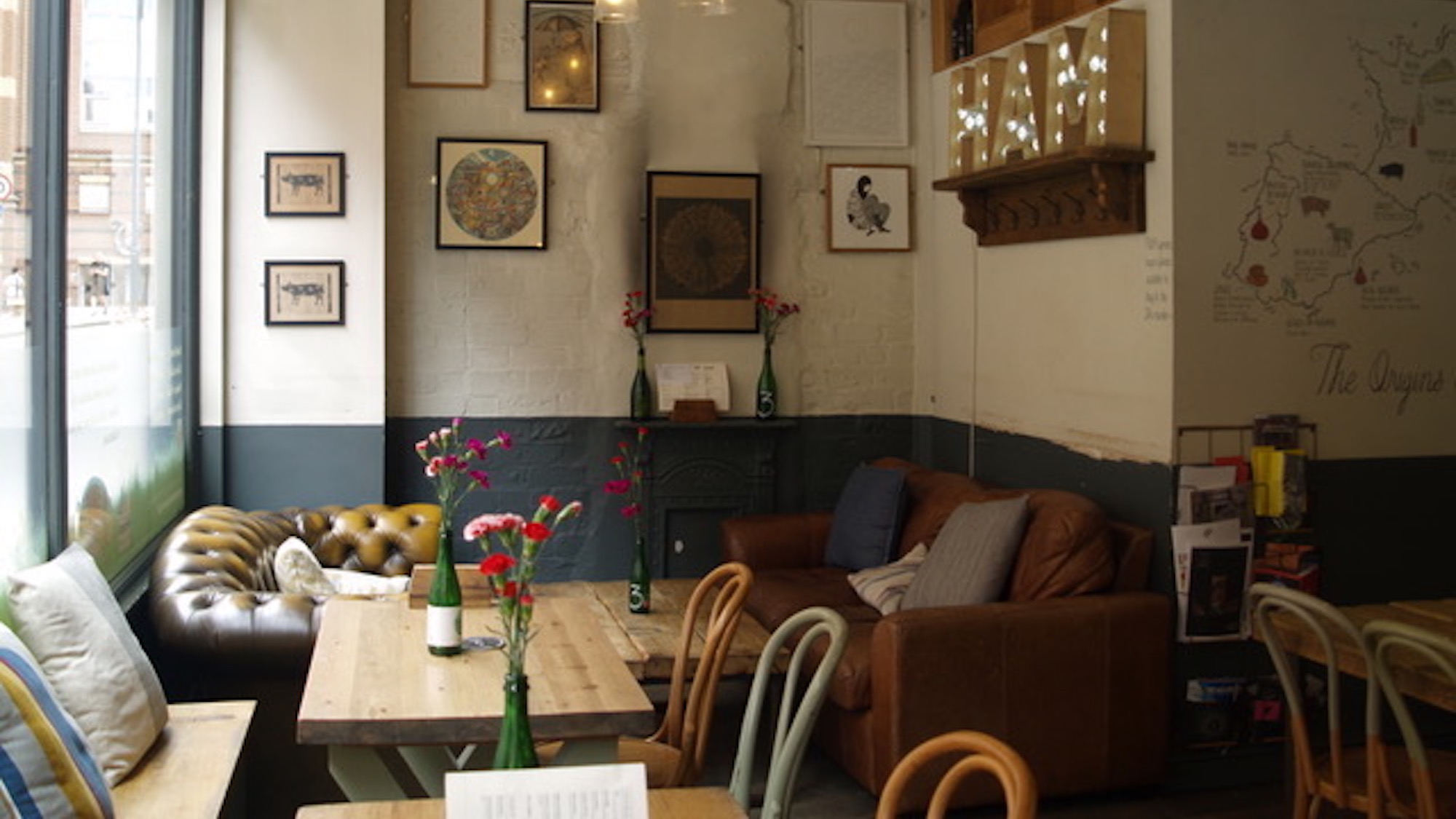 In the mood for finely curated drinks and superlative charcuterie? Friends of Ham is the place to charcute. You can order up some platters of meaty, cheesy goodness, or grab a few dishes to share – the raclette with oozy Ogleshield cheese or roast cabbage with spicy chorizo butter are winners. The wall lists the huge range of beer on offer, ranging from local bitters to staggeringly strong collaborations. It’s not all pints, however – there’s an expertly chosen wine list with some real treats on it. 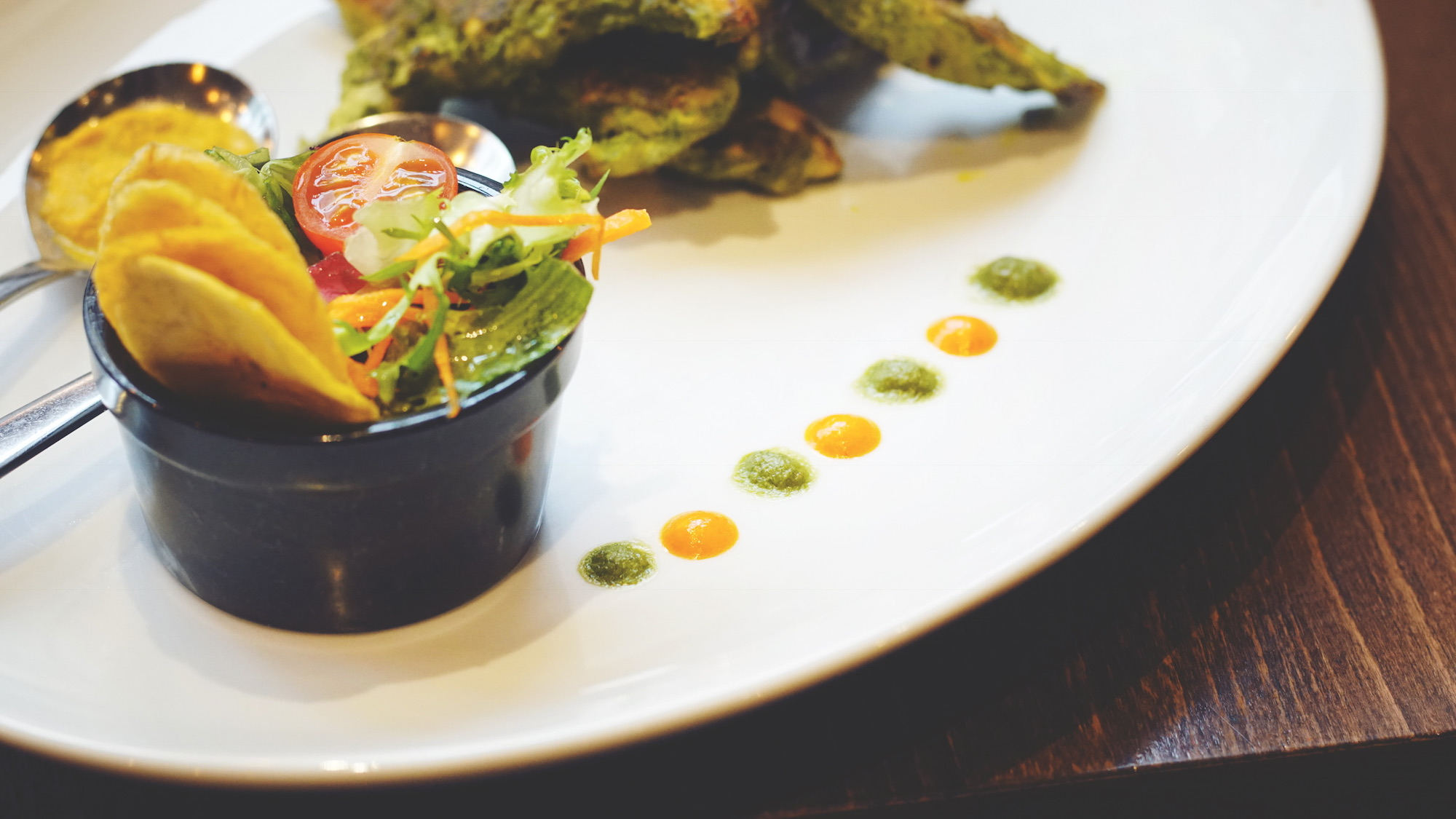 Tharavadu is many things to many people. For some, it’s one of the city’s best-kept eating secrets. For others, it’s the best Indian restaurant in the city. For many, it’s the table to book if you’re going out near Leeds station. It specialises in food from the Kerala region in India’s south, and the menu reads like a wish-list of robust, deep flavours. Try the rich lamb delight of Adu Cheera Mappas or a boldly-spiced biryani. The tang of tamarind, savour of saffron and soothing notes of coconut are all over the menu. 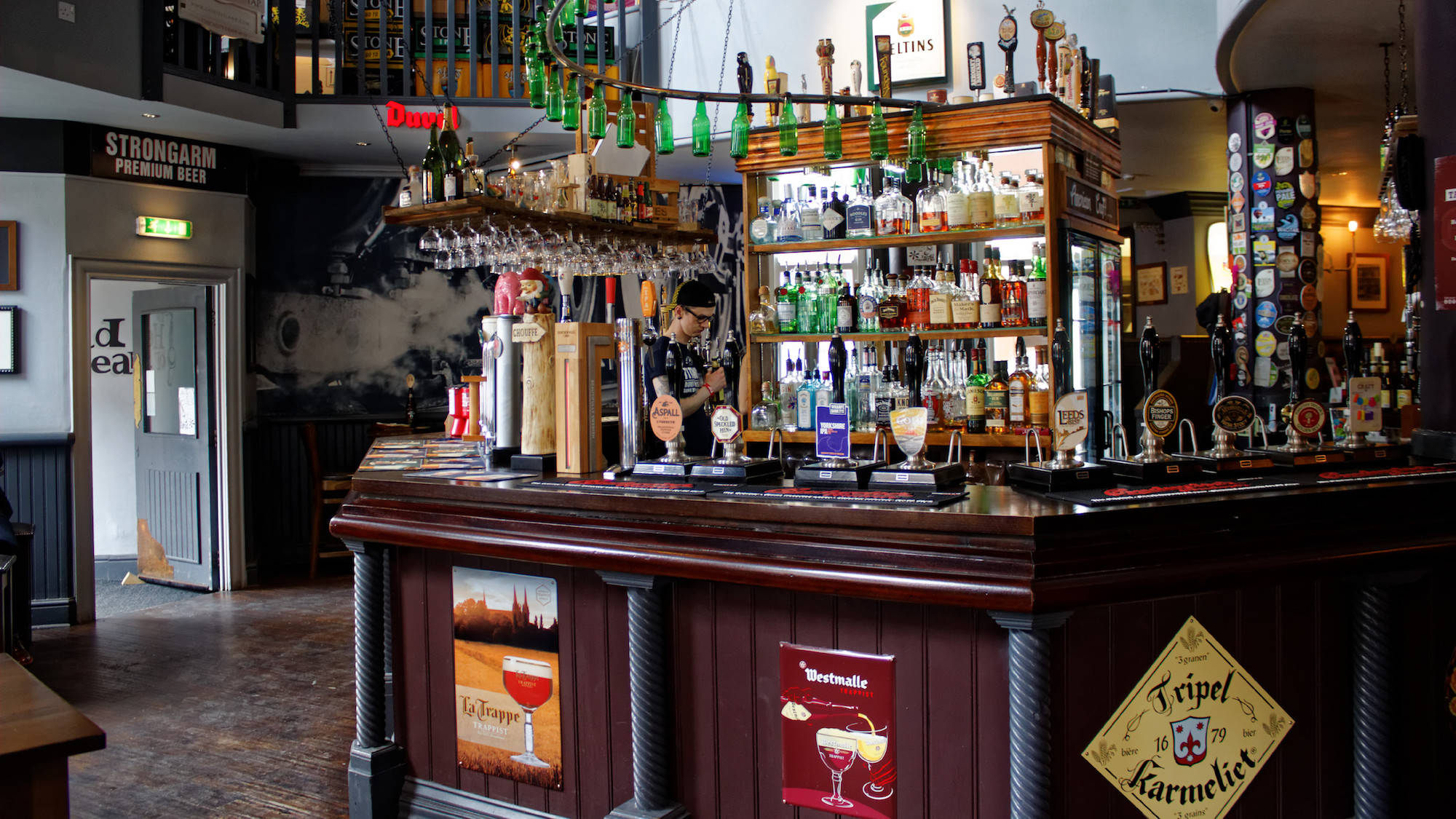 The main problem you’re going to face in The Head of Steam is choosing what to drink. The many-sided bar is a treasure trove of ales and lagers both familiar and fresh, and you can go dizzy circling it to see all there is on offer. The range shifts constantly – they may have Northern Monk’s Faith or Big Wave’s superb Golden Ale, there are beers from across Europe and a strong Yorkshire contingent. But if you’re after a Belgian beer, you’ll be in heaven here, as they’re in plentiful supply both on tap and in bottles. 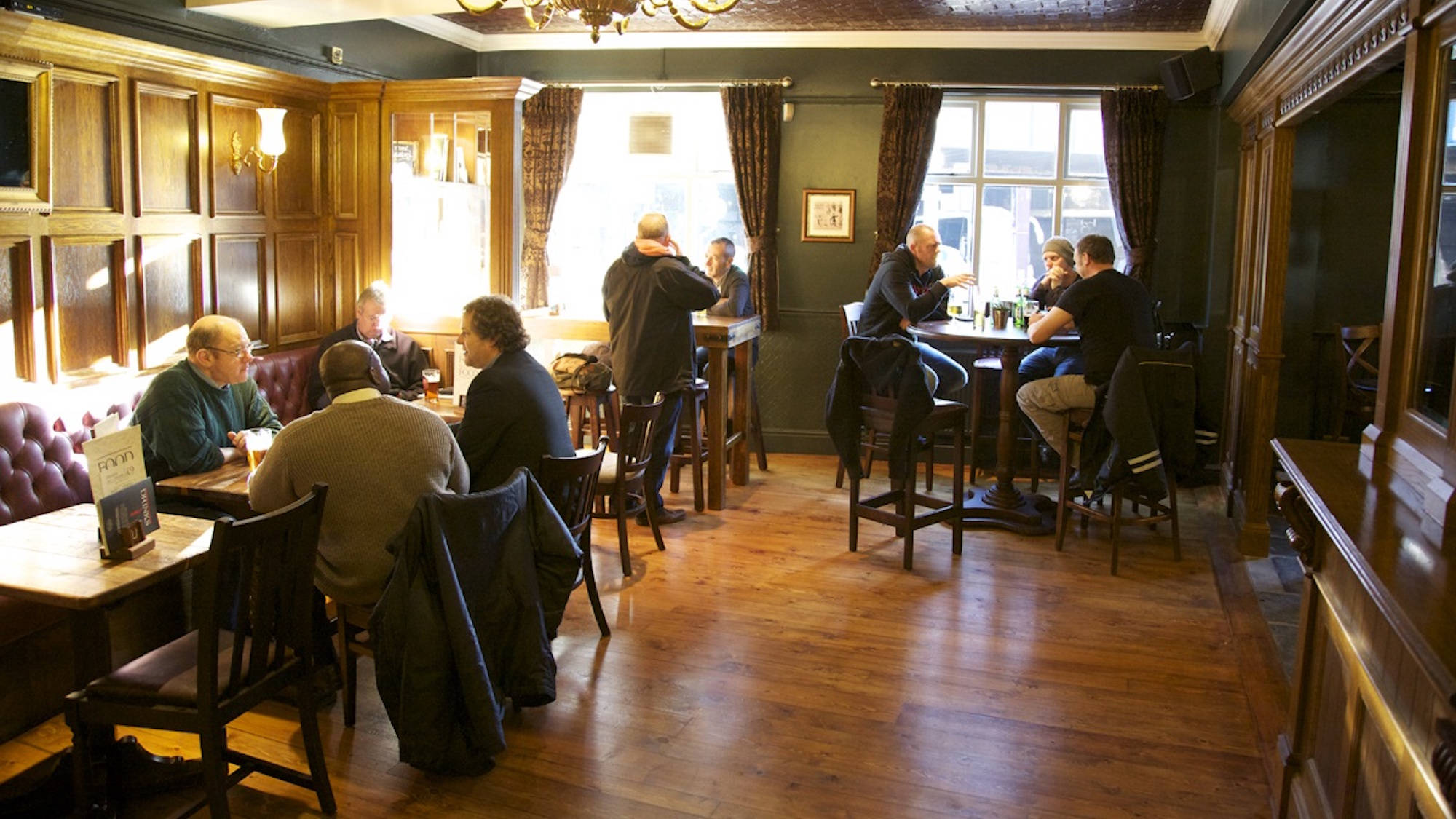 It might really be called The Scarbrough Hotel, but this watering hole has long been known colloquially as The Scarbrough Taps. It’s not just one of the best pubs near to Leeds station, it’s a characterful boozer with a long bar, plenty of seats and a handful of tables outside for prime people watching. Drop in during the afternoon for a quiet pint, or head there in the evening for a livelier atmosphere. Need some fuel for your session? The menu is full of classic pub dishes and excellent pies such as steak & ale or game pudding. 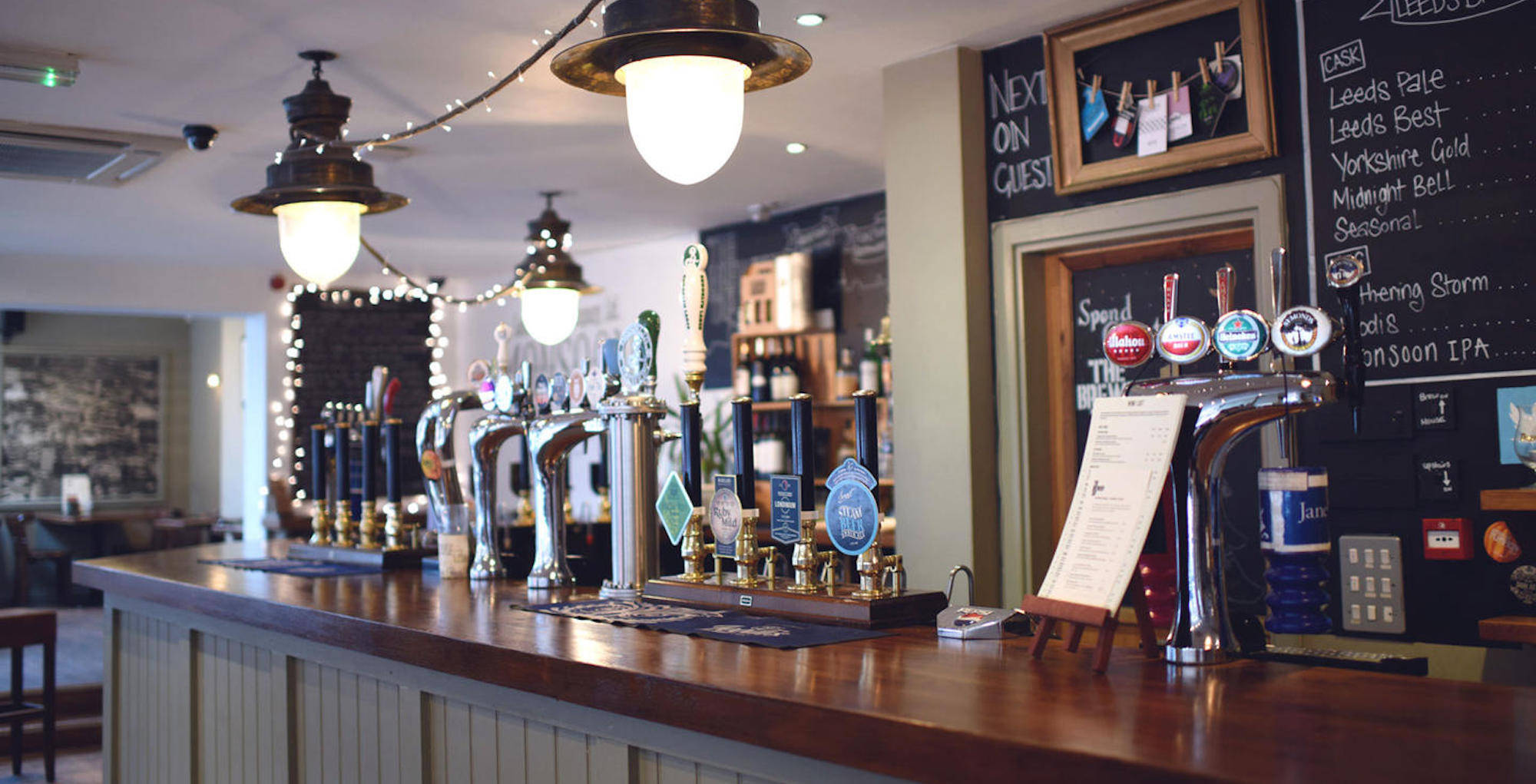 Step inside The Brewery Tap and you’re not just yards from the station, you’re even closer to where a few of the beers on offer are actually brewed. This train-adjacent bar used to be owned by Leeds Brewery and you can still sample their Leeds Pale or Leodis Lager, both of which are made upstairs. Watch people arrive for a night out in Leeds as you work your way along a well-stocked bar – there’s always an interesting guest ale or three – and tuck into smash burgers, loaded fries and veggie options from Falafel Guys. 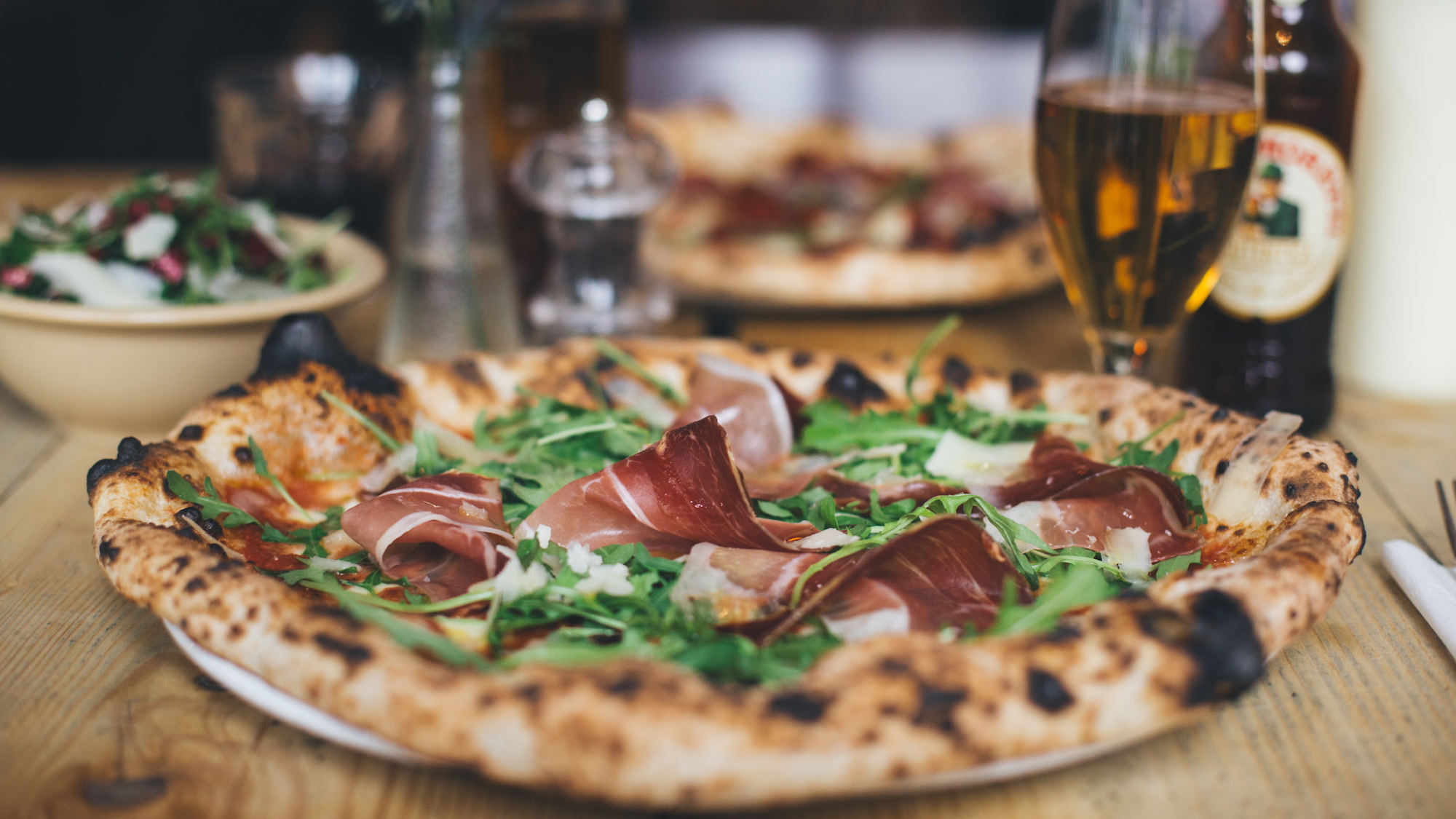 Rudy’s sits opposite The Brewery Tap, a perfect one-two combination to start your night out near the station. It’s all about the Neapolitan pizza here, with an authentic take on everything from dough to toppings, with only premium ingredients making their way onto the pies. You can go for the classic Margherita, or maybe try something more exciting slathered across your double-fermented dough. How about the anchovies, fior di latte, olives and capers of the thoroughly Mediterranean Tarantina? 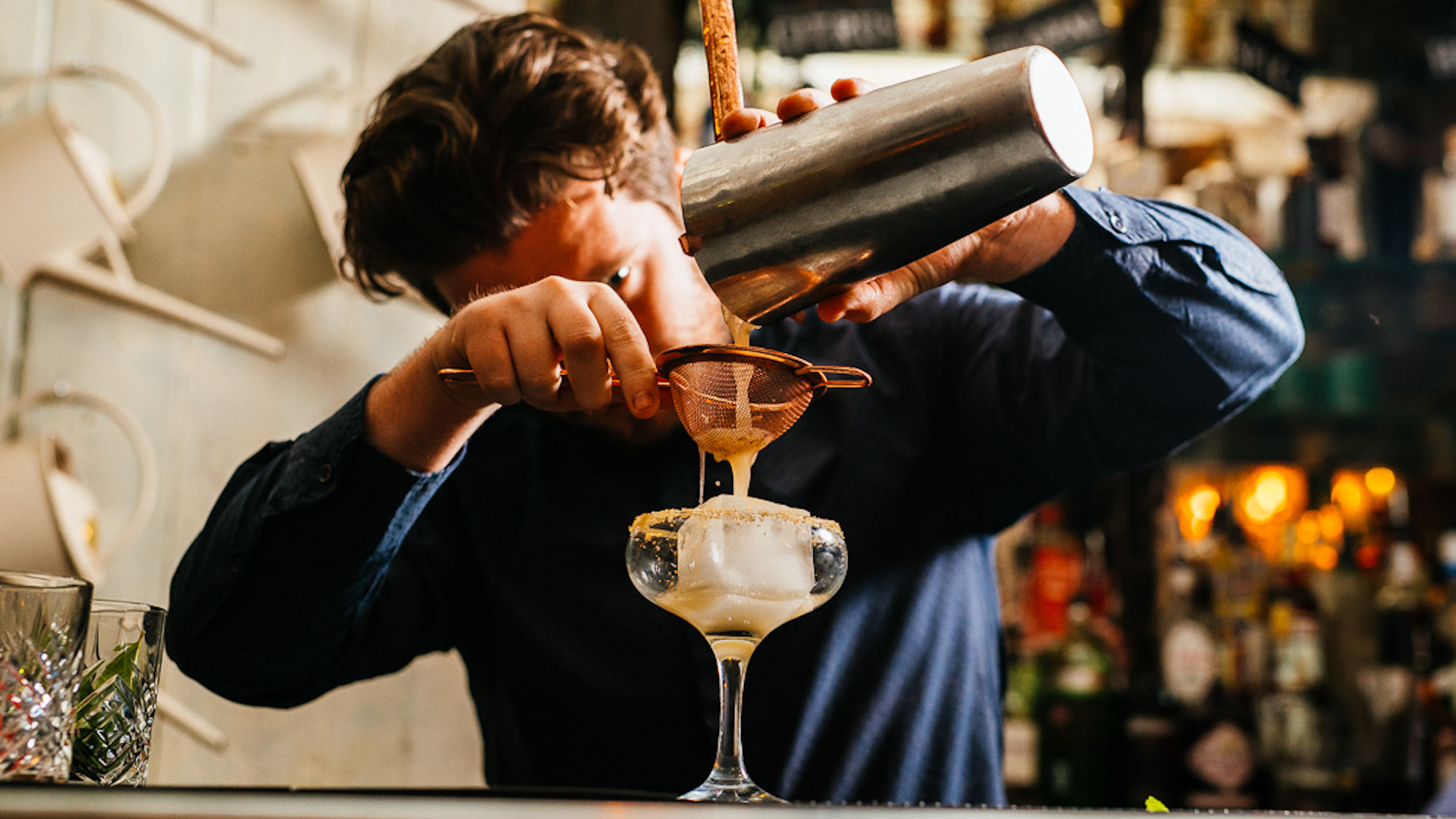 It doesn’t matter if you’re in search of food or just libation in good company, The Botanist won’t disappoint. The vibe is a mixture of tropicalia, country garden and colonial greenhouse, with greenery cascading all around. That horticultural influence makes its way on to the drinks menu, with fabulously floral and heavenly herbaceous cocktails galore – the Rhubarb & Sage Spritz is a gin blend for grown-ups. The food is fun too, with hanging kebabs, sharing boards, wings and solid vegan options. 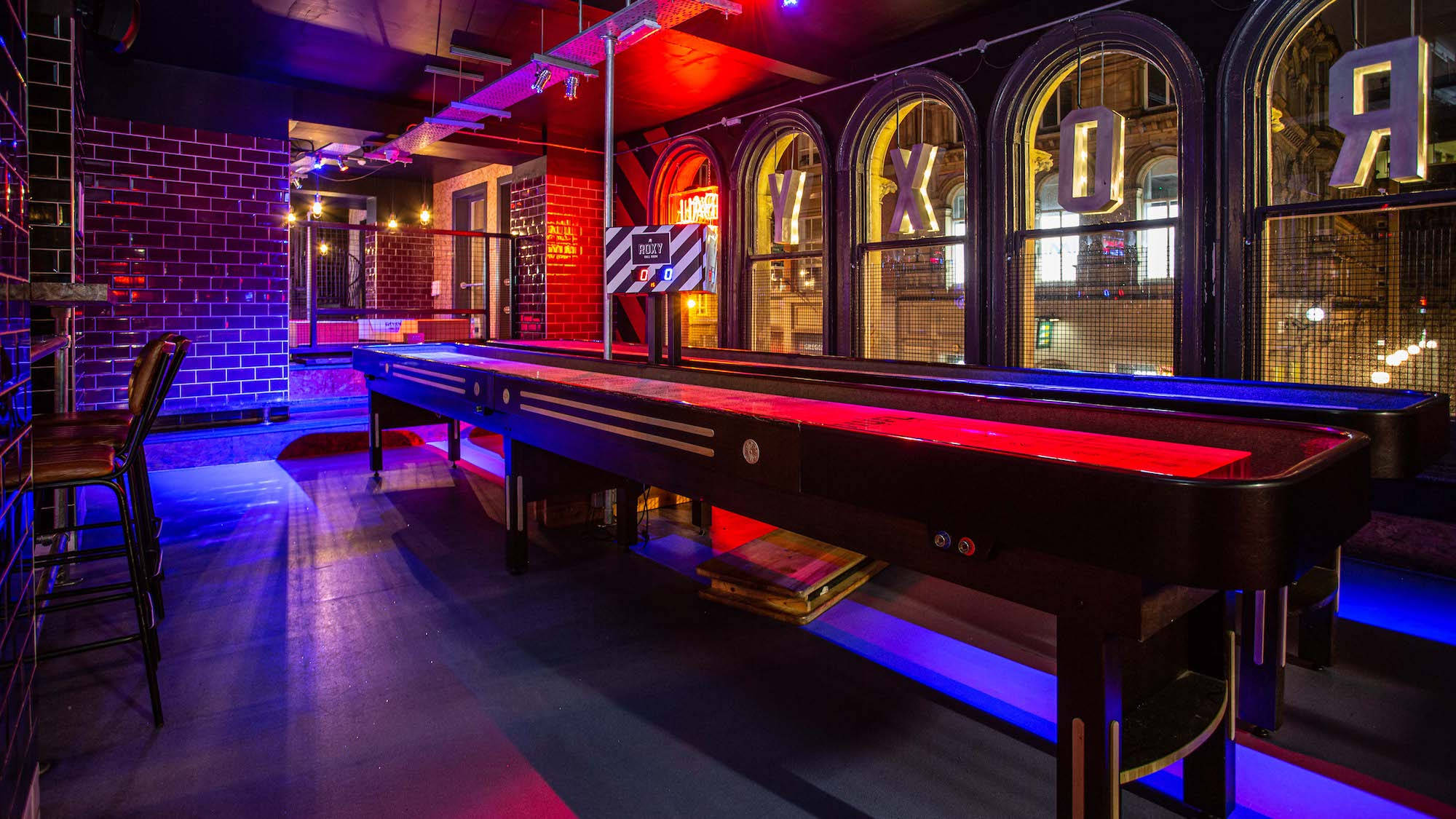 If you’re looking for a bar that’s both near to Leeds station and a whole heap of fun, look no further than Roxy Ball Room. Sure, you can head there just for drinks and scran – the cocktails and pizza will do you very nicely – but games are what Roxy is really all about. Make a booking (or chance your arm and just rock up) and you can play indoor golf, shuffleboard, pool and pong of both the ping and beer varieties. Line up some drinks, challenge your mates, get squiffy – the perfect night out. 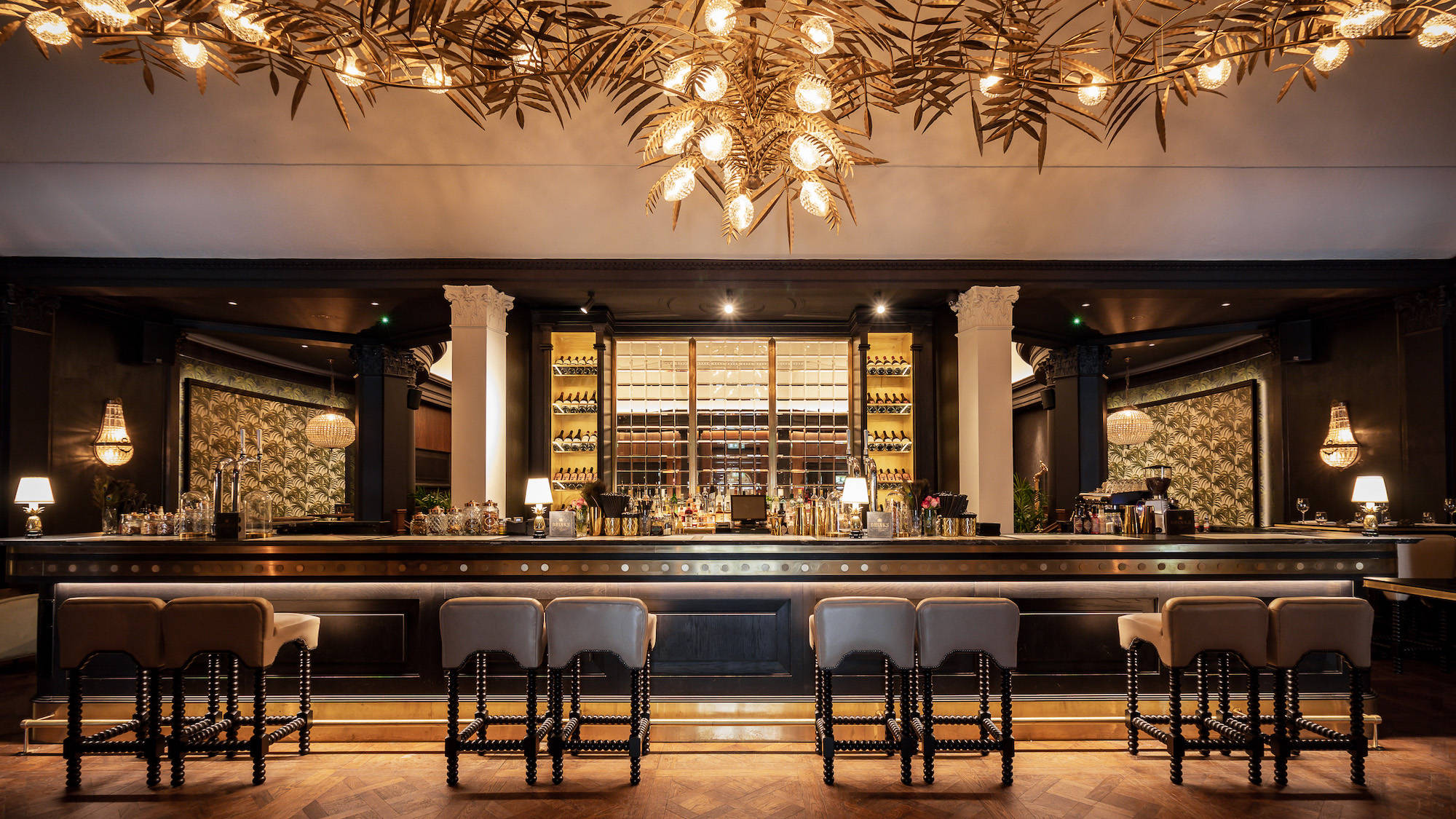 If you and your pals are up for a classy night out close to the station, make a beeline for Grand Pacific in The Queens Hotel. Sink into plush seating and soak up an atmosphere that’s heavy on the botanical. Then make your choice from a cocktail menu with such temptations as an Earl Grey Sling with Tanqueray, Cointreau and a hint of bergamot. There’s good eating here too, with rich duck gyoza, an Asian-influenced burger and spiced cauliflower. Plus, is there a better-sounding bar snack than chips with curry salt? 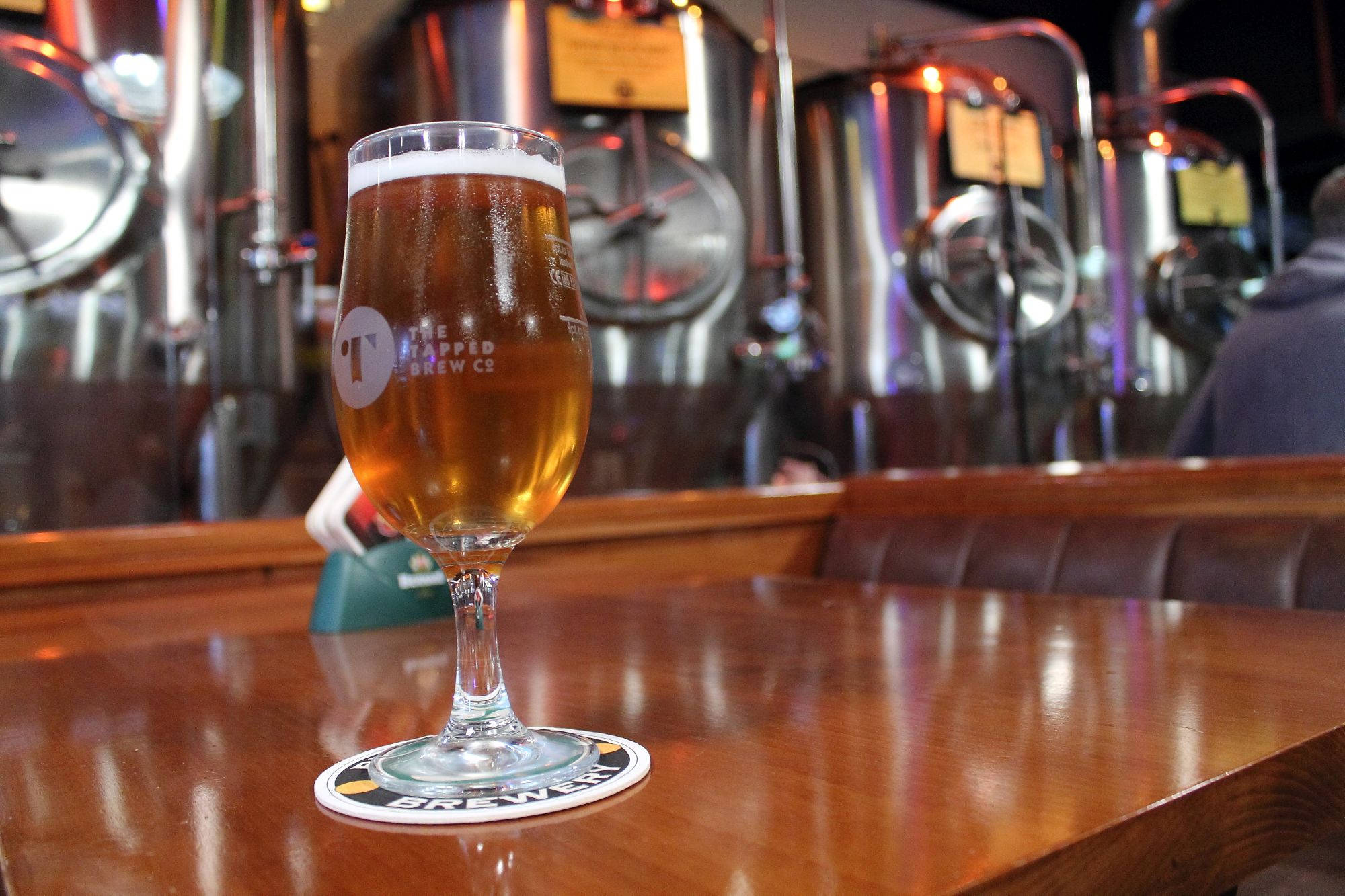 Pizza and beer – what could possibly go wrong? Nothing, as it happens, because Tapped can always be relied on for a good night out. There are beers by the dozen, with a huge selection of cask and keg lines as well as bottles and cans – serious hopheads will be in heaven. Not a beer fan? The wine and fizz on offer will make sure all your party is happy. And once the hunger kicks in, you can sate it with pizzas both large and small – a fiery Robo Calda with n’duja chillies and jalapeños, perhaps? 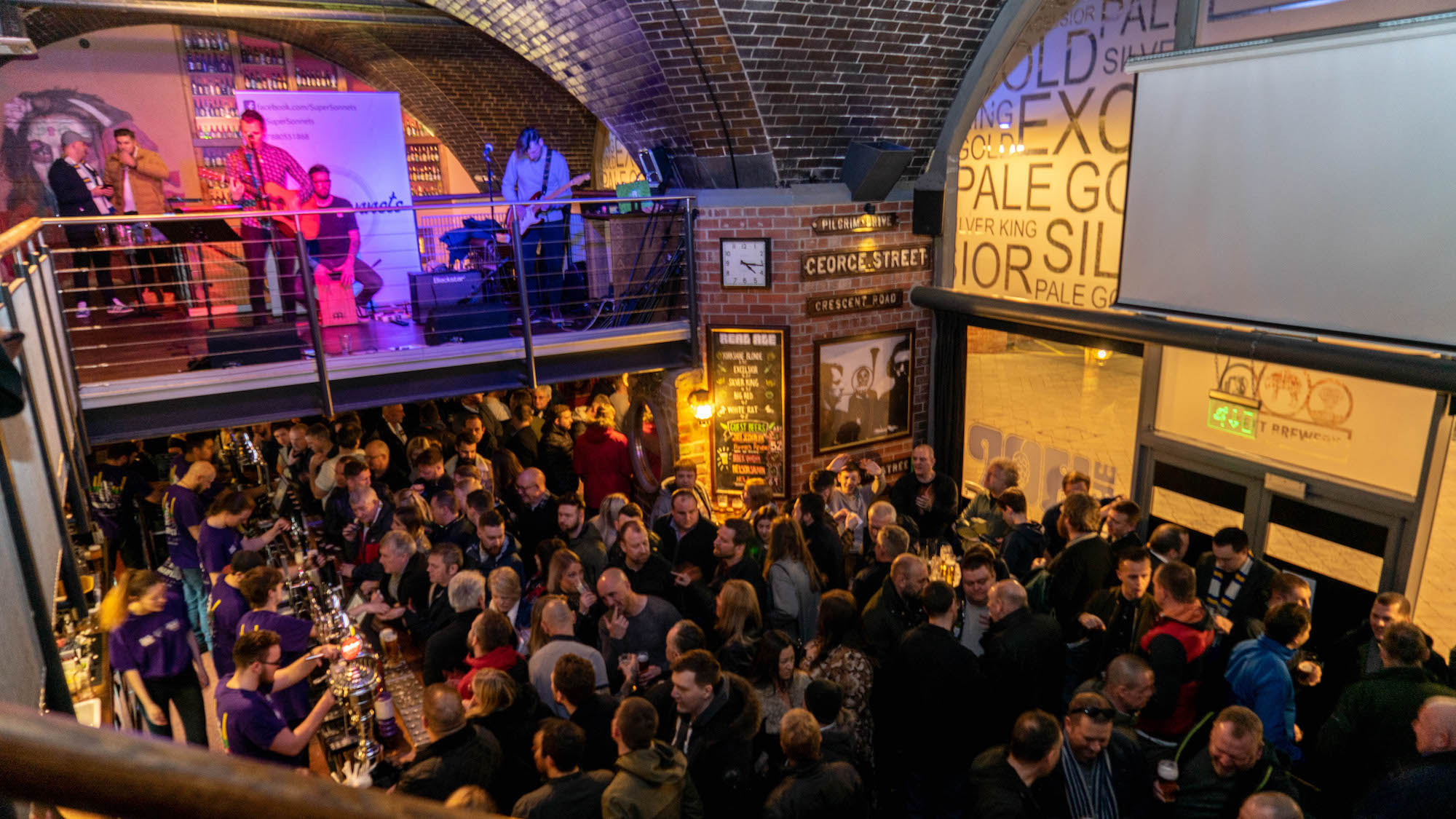 An outpost of Ossett Brewery, The Hop has been a mainstay of a great night out in Leeds for a while now. Head through the door cut into railway arches and you’ll find a massive range of craft beers and real ales, from the brewery itself and beyond. There’s live music on Saturdays and one of the best pub quizzes in Leeds every Tuesday. Weather on your side? Sit outside to make the most of the buzz next to the canal. Best of all, The Hop is only a short hop from the station. 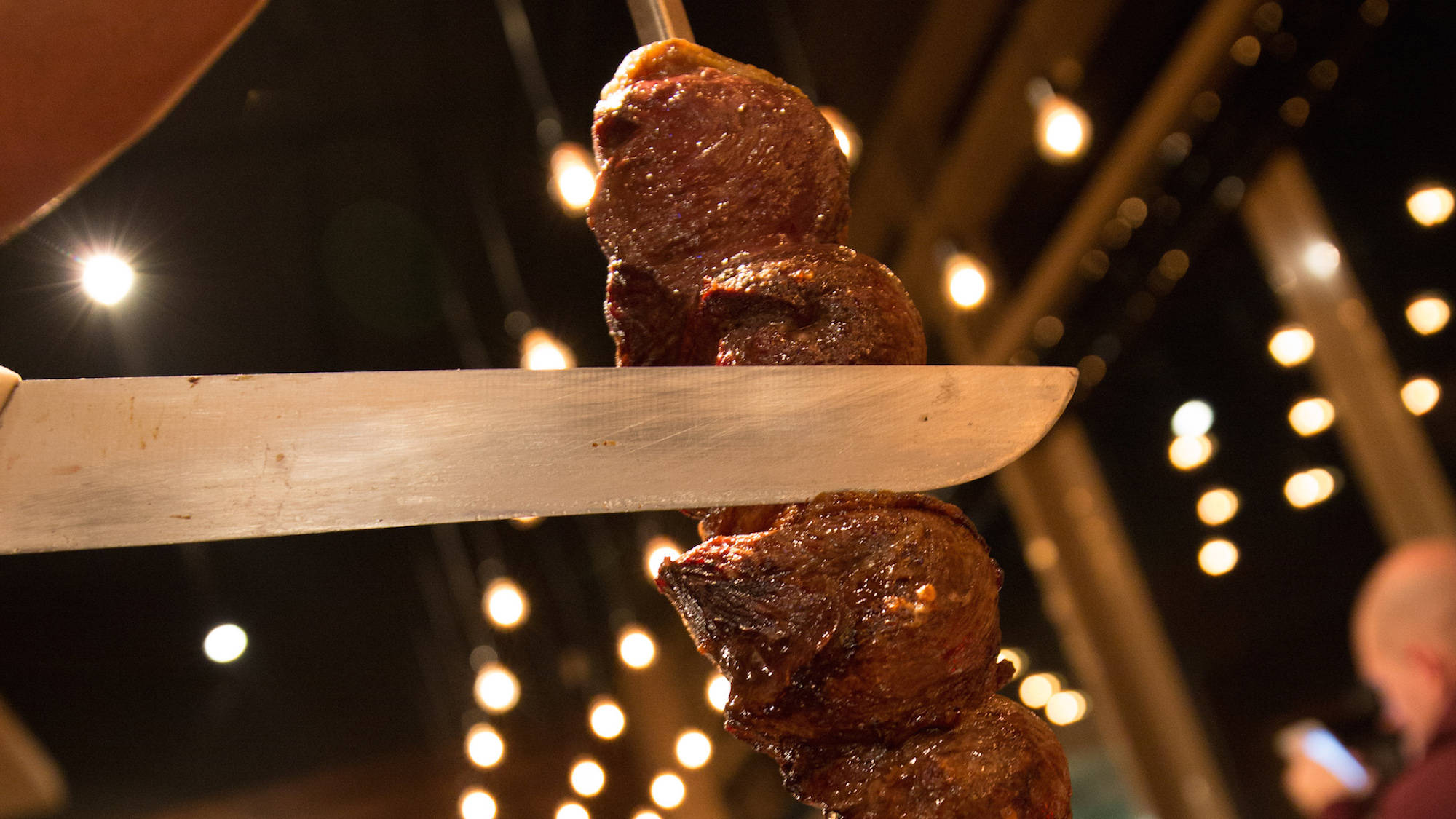 Fancy a marvellous meat feast? If so, Fazenda is faz-tastic. It’s a Brazilian rodizio-style grill, a carnival of carnivorousness where you’re given a card to indicate whether you want more to eat, or if you’ve had enough. Flip it to red and the waiters will ignore you – albeit politely. Turn it to green and they’ll bring all manner of steak, marinated lamb, chicken thighs, honeyed pork collar and more straight to your table, and all for a set price. Sat on the Wharf with the canal outside, it’s a gorgeous place to gorge yourself. 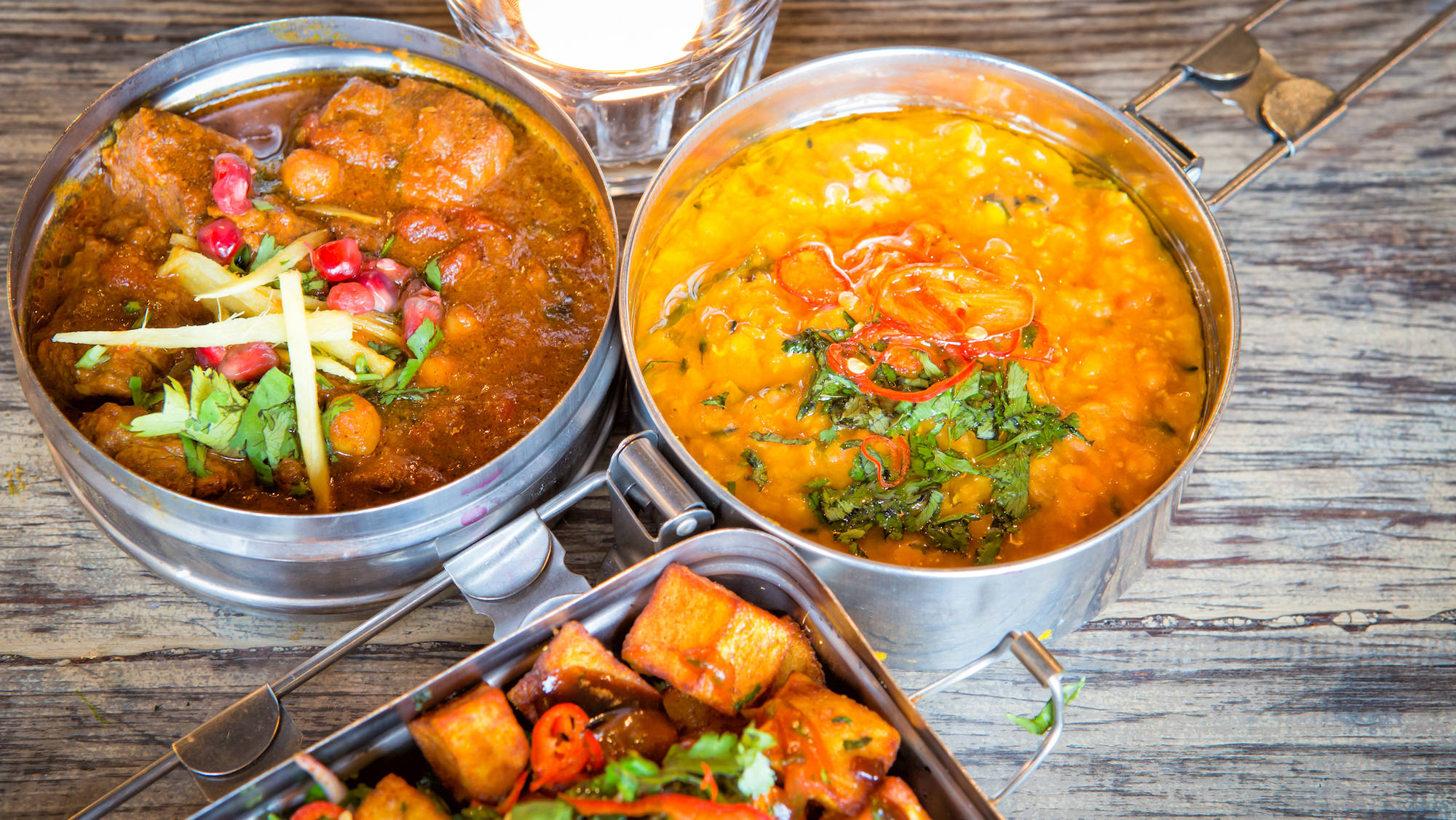 If you’ve walked past Mowgli on Boar Lane, here’s some good news – yes, you can reserve those swing seats in the window. To be fair, it’d be worth sitting on the old school seats to eat the Indian street food goodness served up here, with punchy Gunpowder Chicken, a lamb curry rendered evocative with star anise and the show-stopping Bunny Chow. The latter is a chicken and potato curry served inside a bread loaf. One of the funnest restaurants near Leeds station, it’s a place that doesn’t stint on flavour. 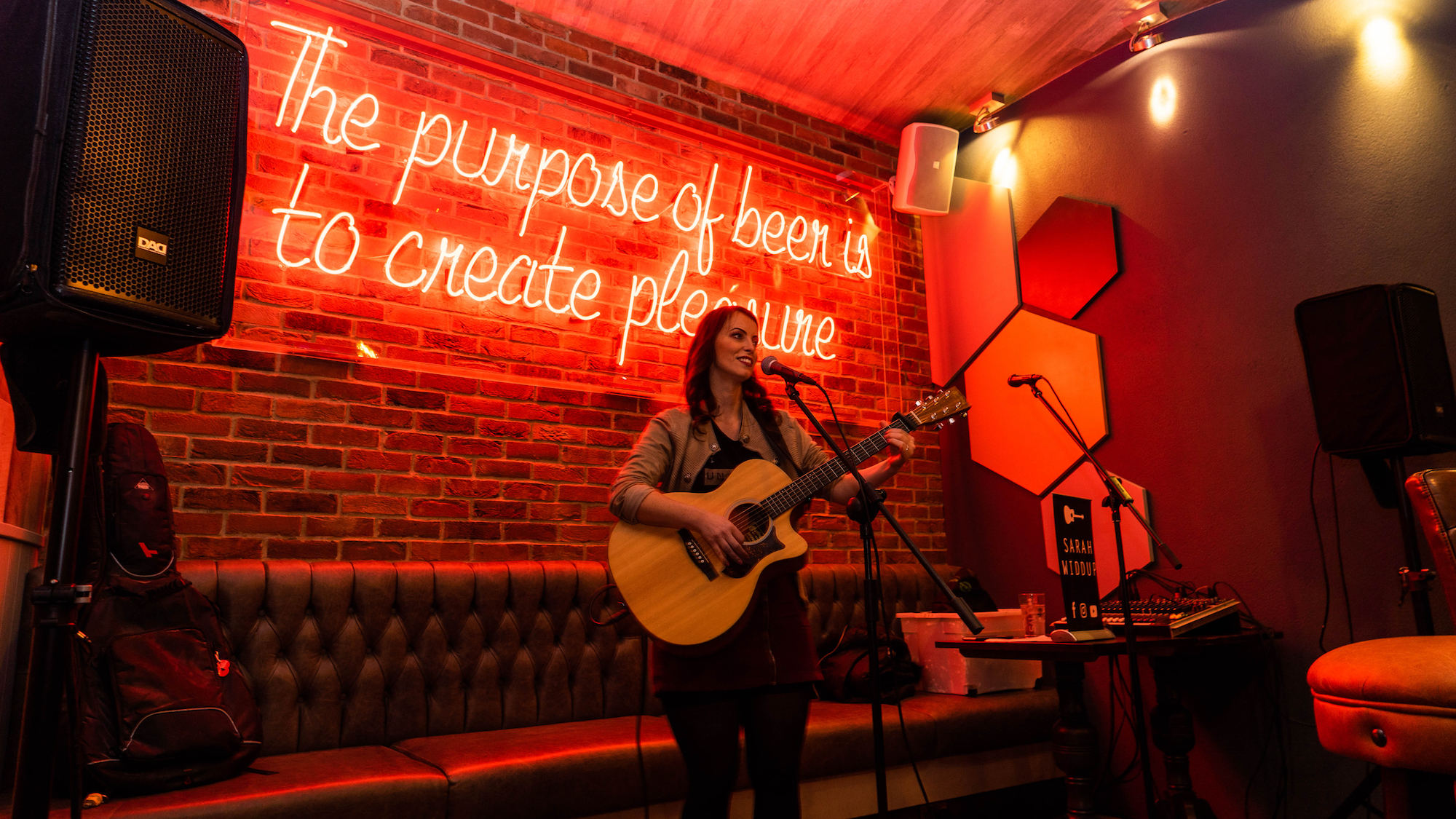 Saltaire’s micro-brewery SALT Beer Factory – itself part of Ossett Brewery – have a home-from-home in Leeds at Craft Asylum #1, occupying the ground floor of wharf-side Candle House. It’s a modern, stylish place to grab a drink, with hand pumps serving up highly suppable beers such as Ossett’s Yorkshire Blonde and SALT’s Jute Session IPA. Outdoor benches, occasional live music and friendly staff complete the picture – this is a bar that manages the balancing act of being both near Leeds station and away from the main drag. 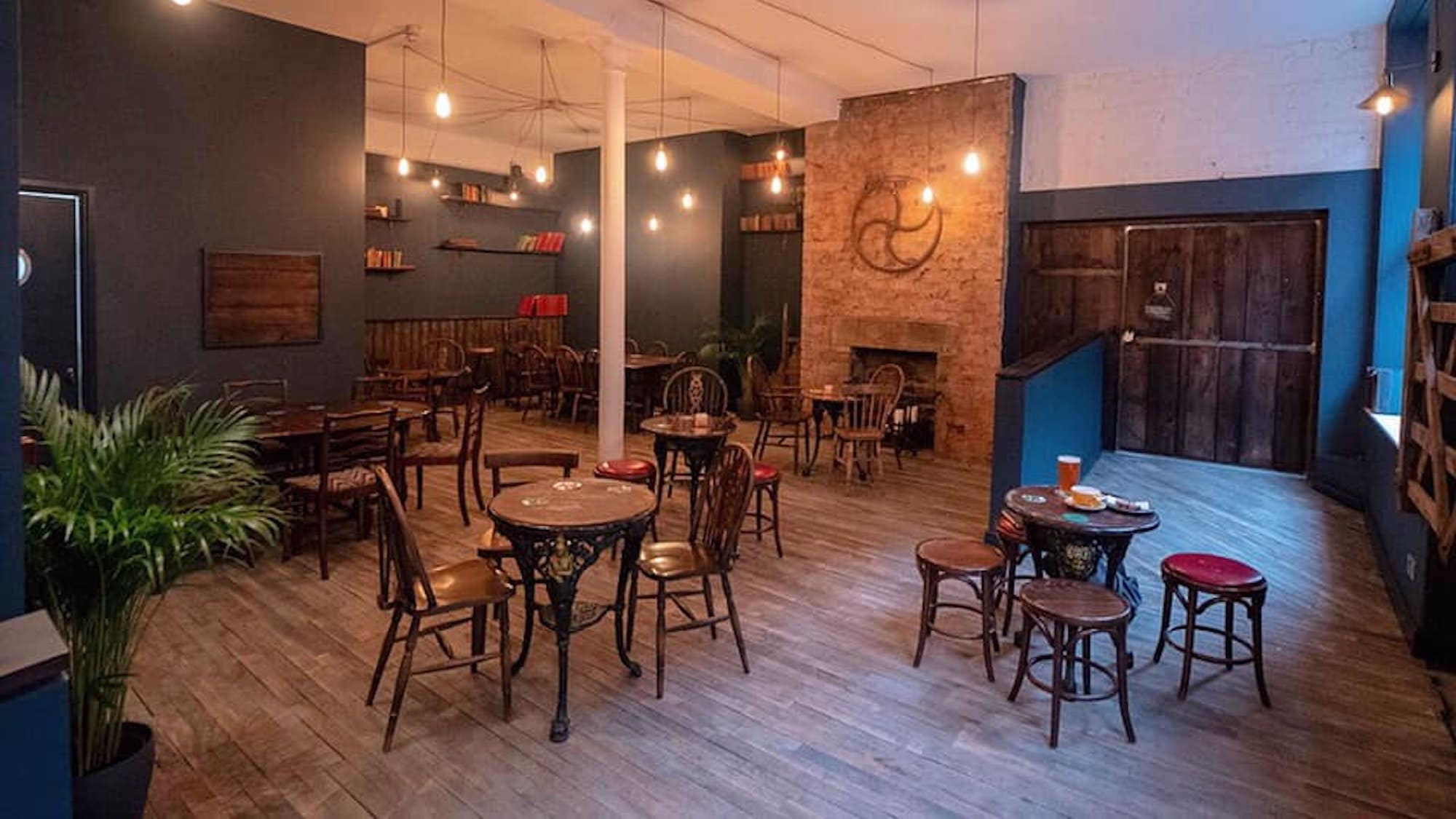 The Brew Society takes its name very seriously. They’ll brew you up a great single origin coffee in the daytime, and then they serve up a lavish range of craft and micro-ales at night. There’s around a dozen to choose from, with a focus on local and northern beers, but they don’t neglect the wine, whisky and gin drinks either – this is a seriously well-stocked bar. Don’t forget the croissants, cakes and pastries too. Is it a cafe that does great beer or a pub that serves up barista coffee? It doesn’t matter, at any time of day, you’ll love it either way. 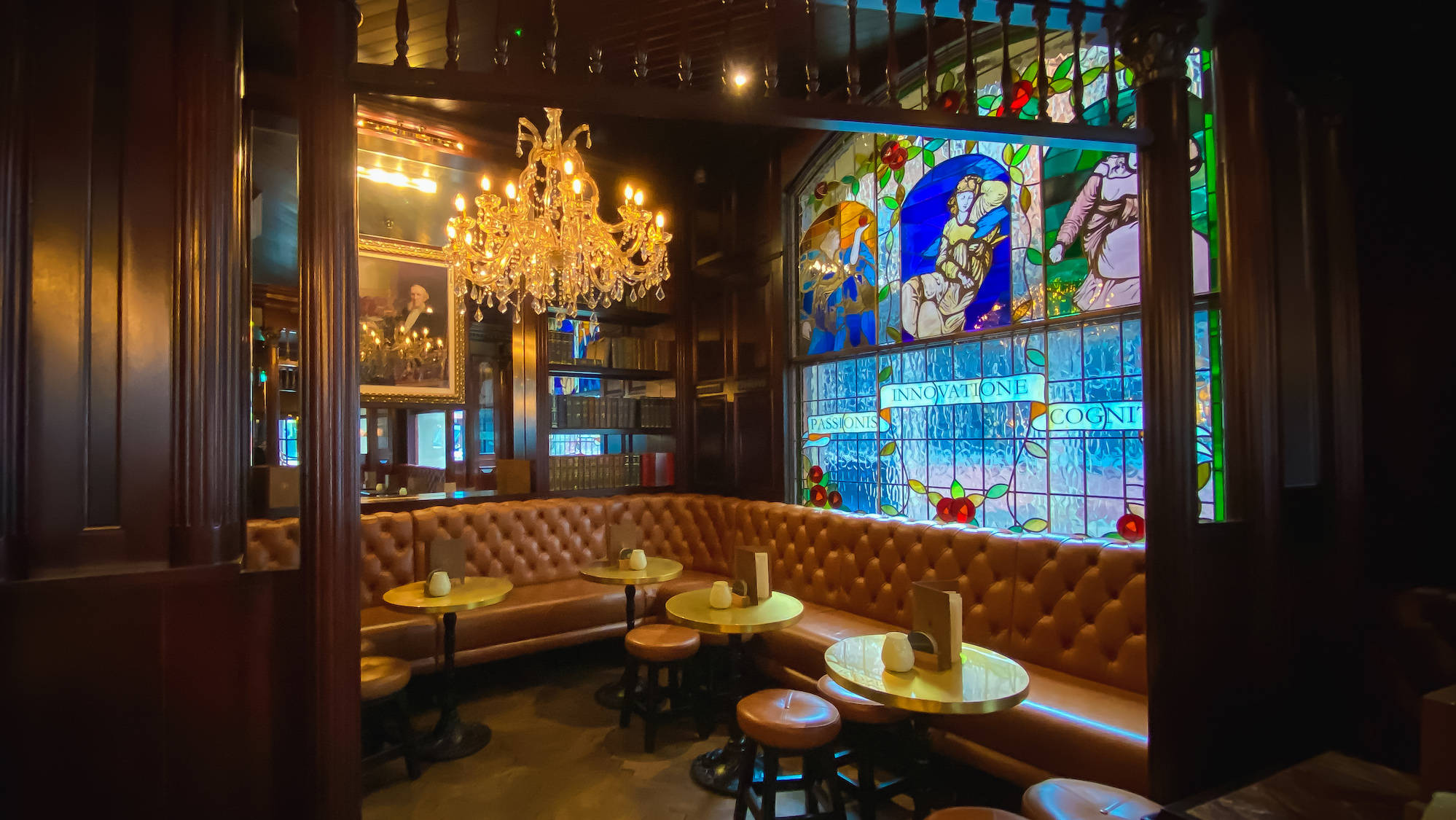 Stained-glass windows, plush banquettes, dark wood, chandeliers – even if Thornbridge and Co.’s first Leeds pub served up pigswill, it would be worth a visit for the interior. Happily, they also serve up a beer drinker’s dream from their own range and more. The house beers include the sessionable likes of Lord Marples and Green Mountain, along with the somewhat chewier Jaipur. But you’ll also find visits from the likes of Five Points and Tiny Rebel, a good wine list and a gin range that spans the globe. 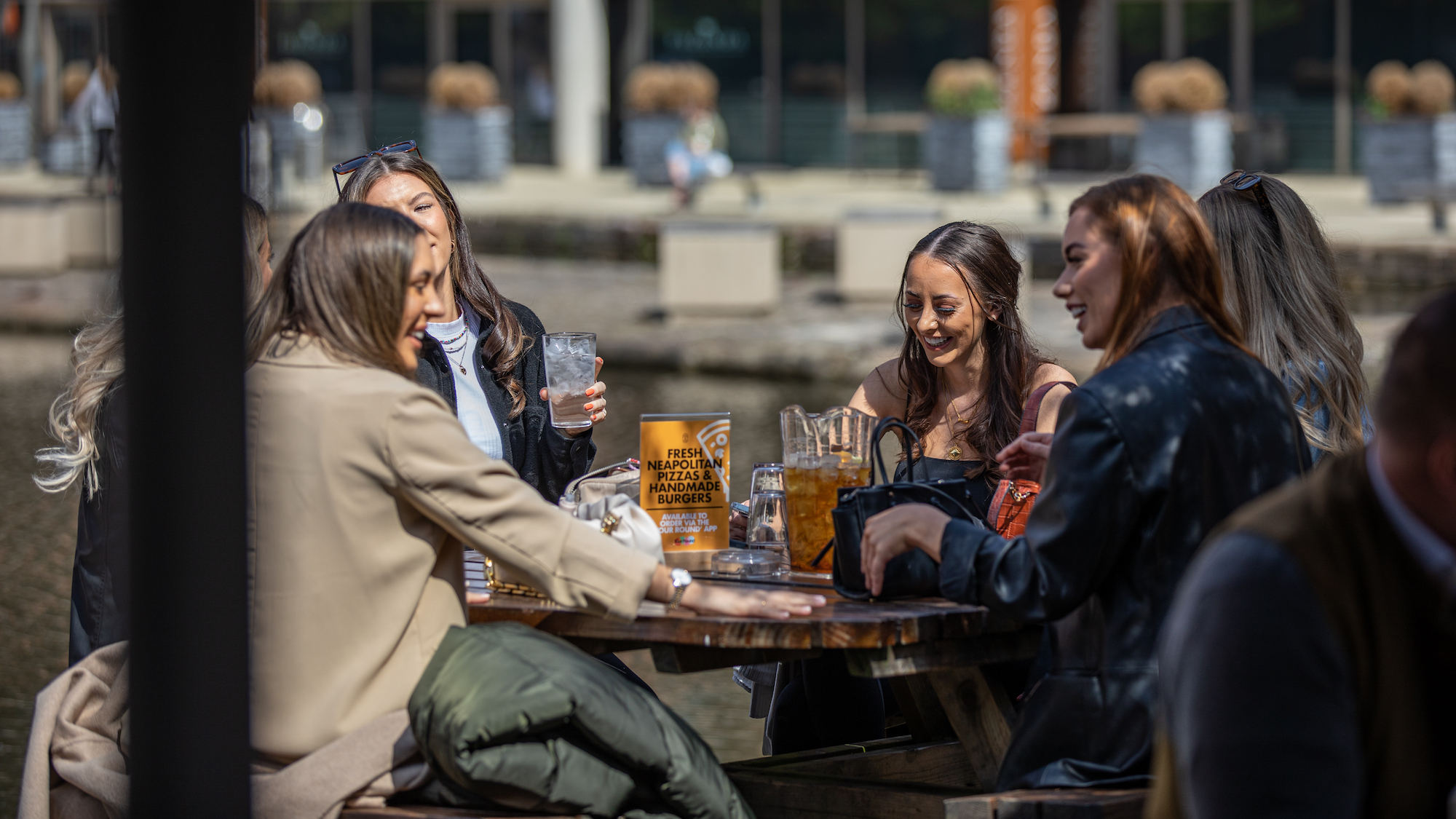 What makes Water Lane Boathouse so appealing – apart from the great drinks range, lovely staff and stylish interior – is that it’s a great year-round venue. In summer, spring and autumn, spill out onto the seats and tables at the front and side. In winter, when the cold really bites, there are heated tipis to keep the chill off and cosy seating indoors. There’s no faulting the booze choice, while superior pub grub comes courtesy of their custom-built Neapolitan pizza oven, along with sharing boards, steak sarnies and brill burgers.