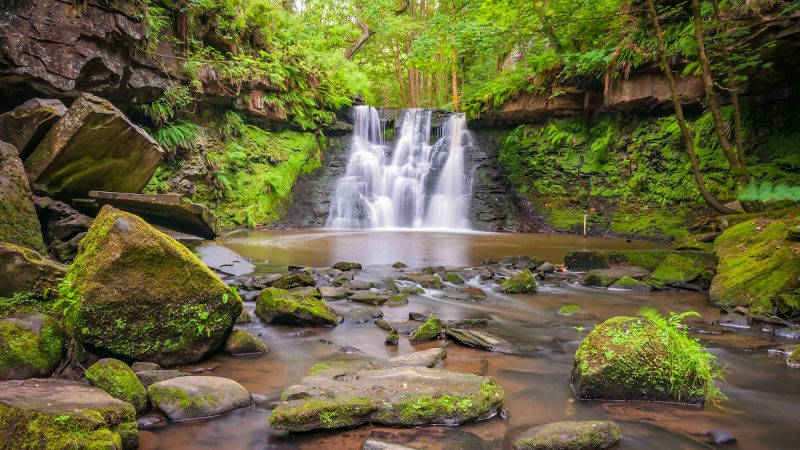 There are loads of wonderful walks in Yorkshire and these ten showcase the region’s most incredible waterfalls.

From rock formations to caves, Yorkshire is full of natural wonders just waiting to be discovered. But if you really want to be wowed, you have to visit the region’s waterfalls – and what better way to do it than by going on a long, leisurely walk? We’ve got ten incredible rambles for you to try, each of which stops at one of Yorkshire’s finest falls. Where will you go first? 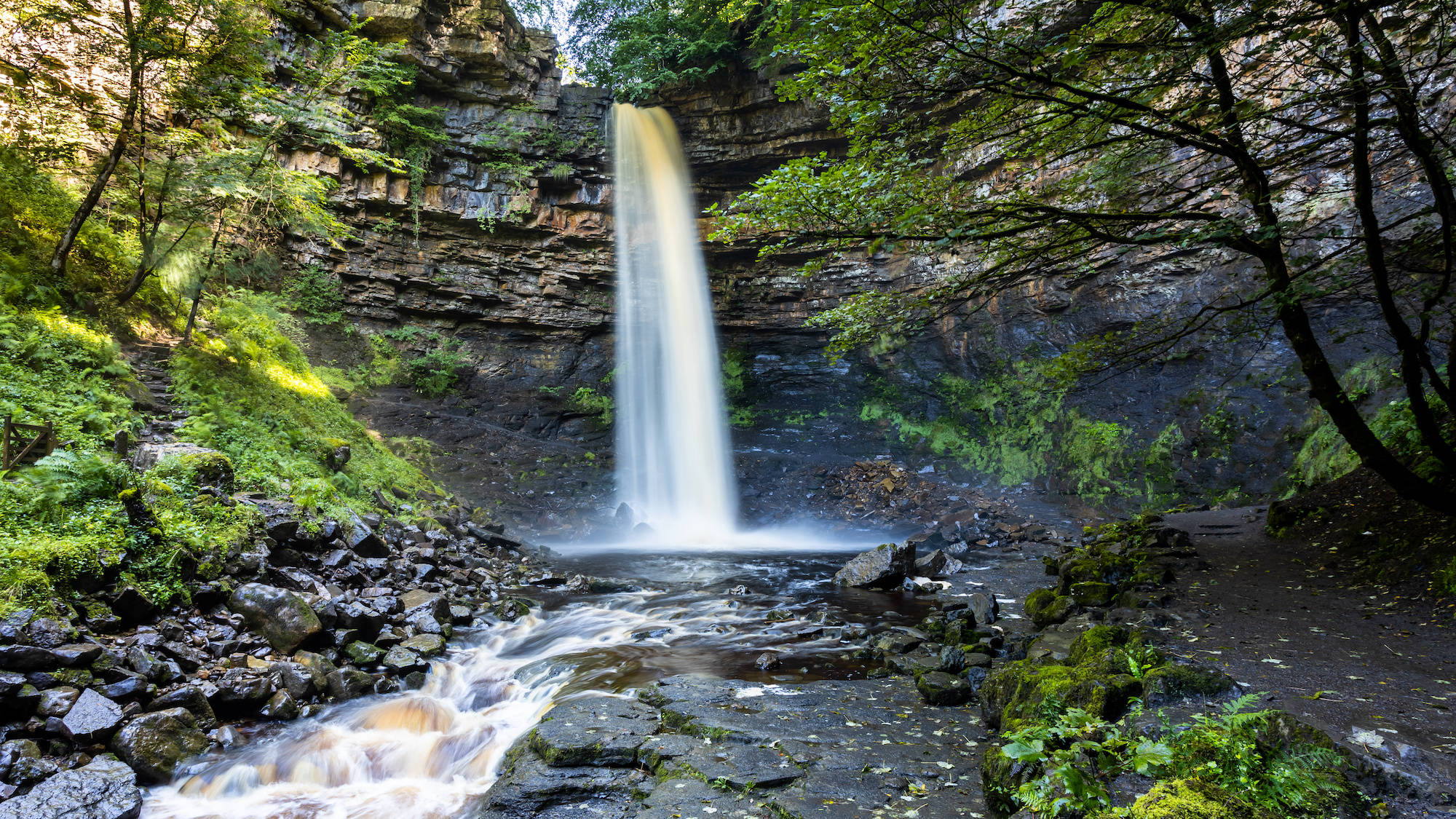 You get the best of both worlds on this leisurely 4.25-mile walk through the Yorkshire Dales. You’ll start in the village of Hawes, which is full of traditional charm, before taking a ramble along a lovely stretch of the River Ure and through a quiet area of woodland to reach one of the region’s best natural landmarks. Hardraw Force is a sight to behold. At around 100 feet, it’s the highest single-drop waterfall in England. You might recognise it from Robin Hood – Prince of Thieves. You can only access it from the 13th-century Green Dragon Inn, so nip in for a pint before you head back to the start. 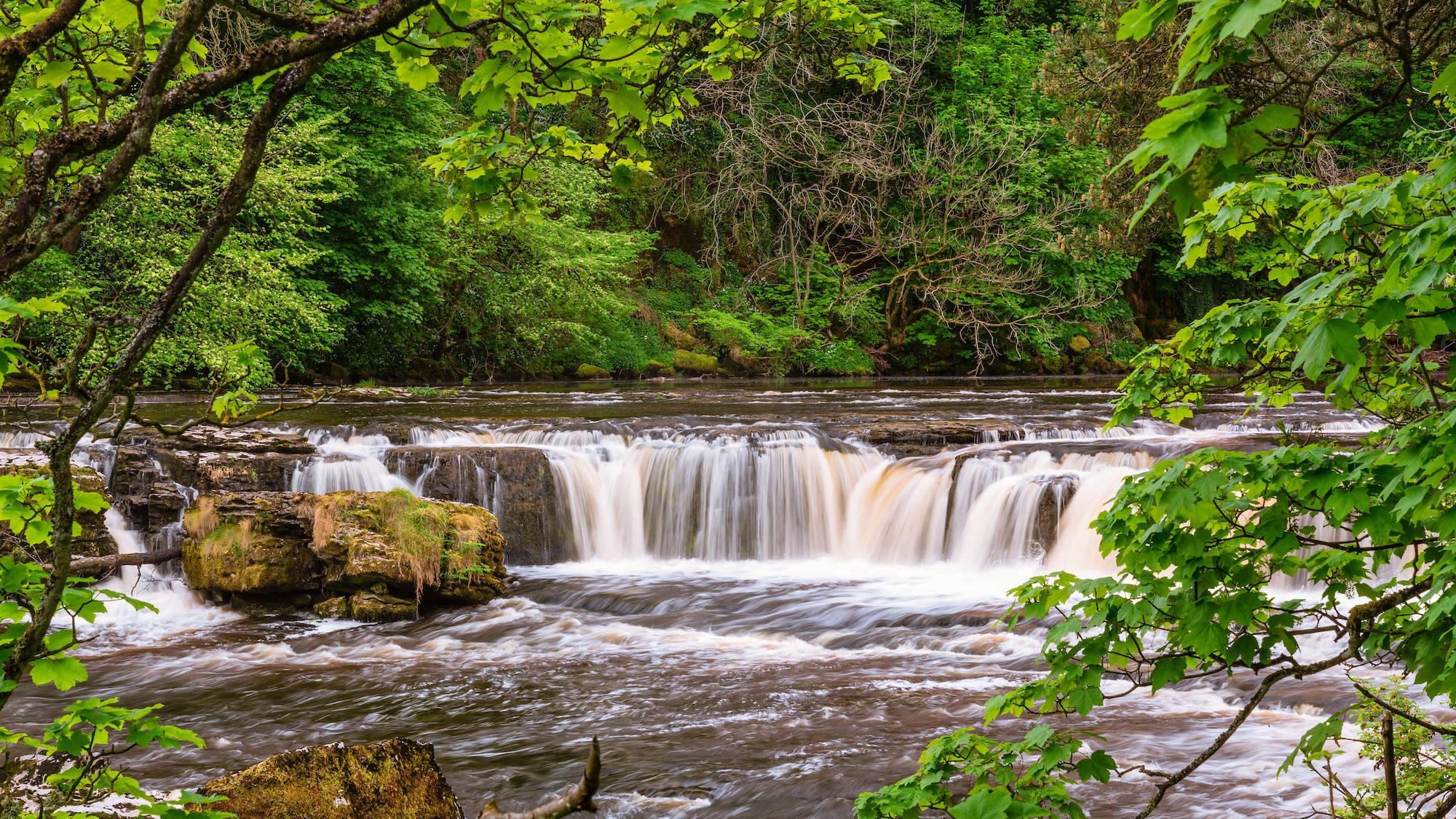 Take the whole family to Aysgarth Falls for one of the easiest waterfall walks in Yorkshire. The route is only 2.2-miles long and it’s all on well-trodden paths. You won’t see the falls straight away – first you’ll wander through the pretty Freeholders Wood before you soak in the beautiful views across Wensleydale on your way past Bolton Castle. Then it’s waterfall time. Aysgarth Falls is split into three distinctive flights of water, Low Force, Middle Force and High Force, and you’ll visit them in that order. Each one is more powerful than the last, carved out by the River Ure, and they’re an incredible sight to see. 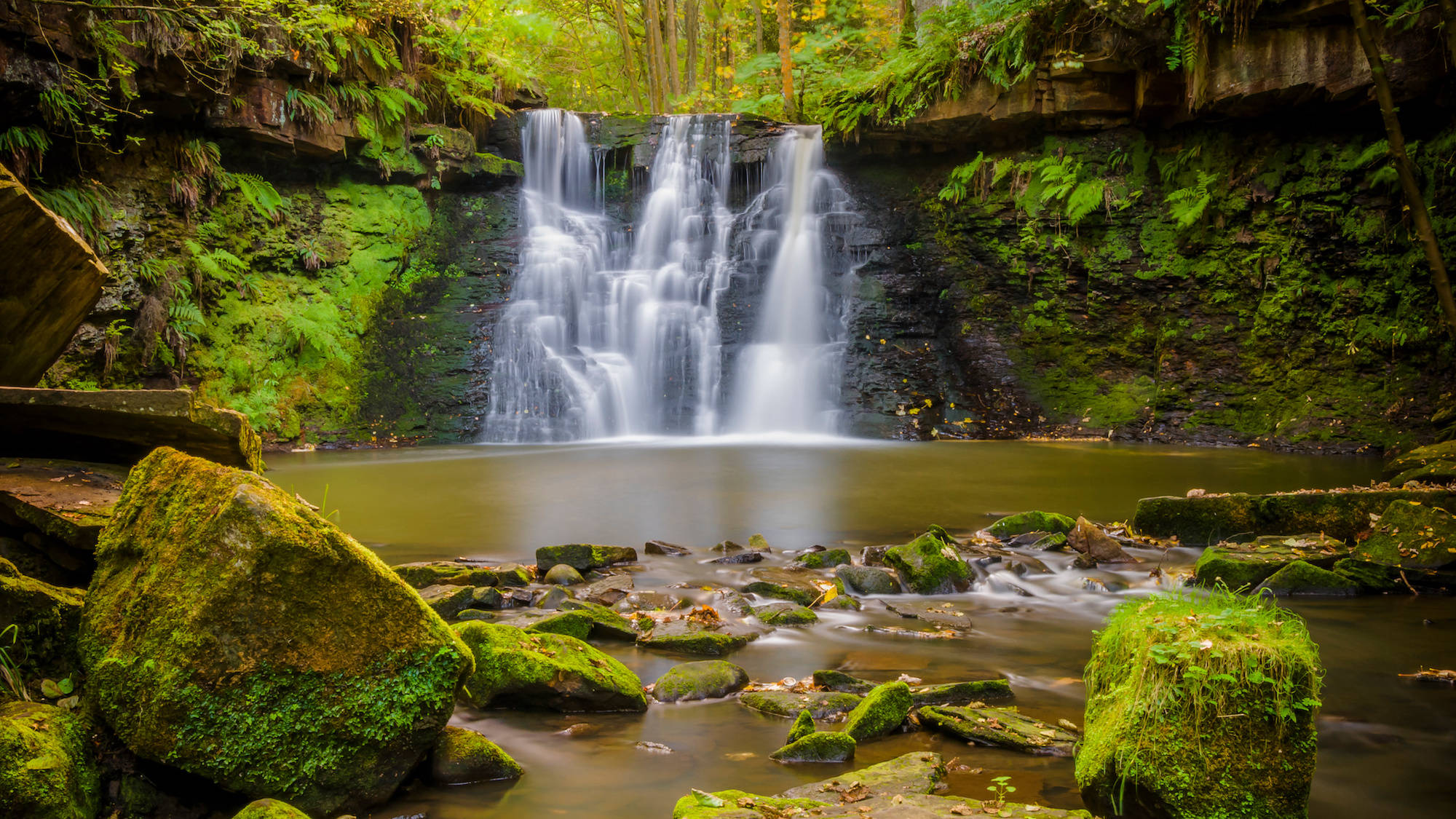 This 10.7-mile ramble will take you into the scenic Harden Valley. You’ll start with a steep ascent through Myrtle Park as you follow Harden Beck upstream. You’ll soon reach the picture-perfect Goit Stock Waterfalls nestled away in the woodland. It’s less than 10-metres high and is surrounded by twisting tree roots and mossy stones. From here, it’s onwards towards Cullingworth, home to the Hewenden viaduct, which promises rewarding views of Brontë Country as you wander through. The route continues down through the St Ives Estate back into Bingley, where you can refuel at The Brown Cow pub. 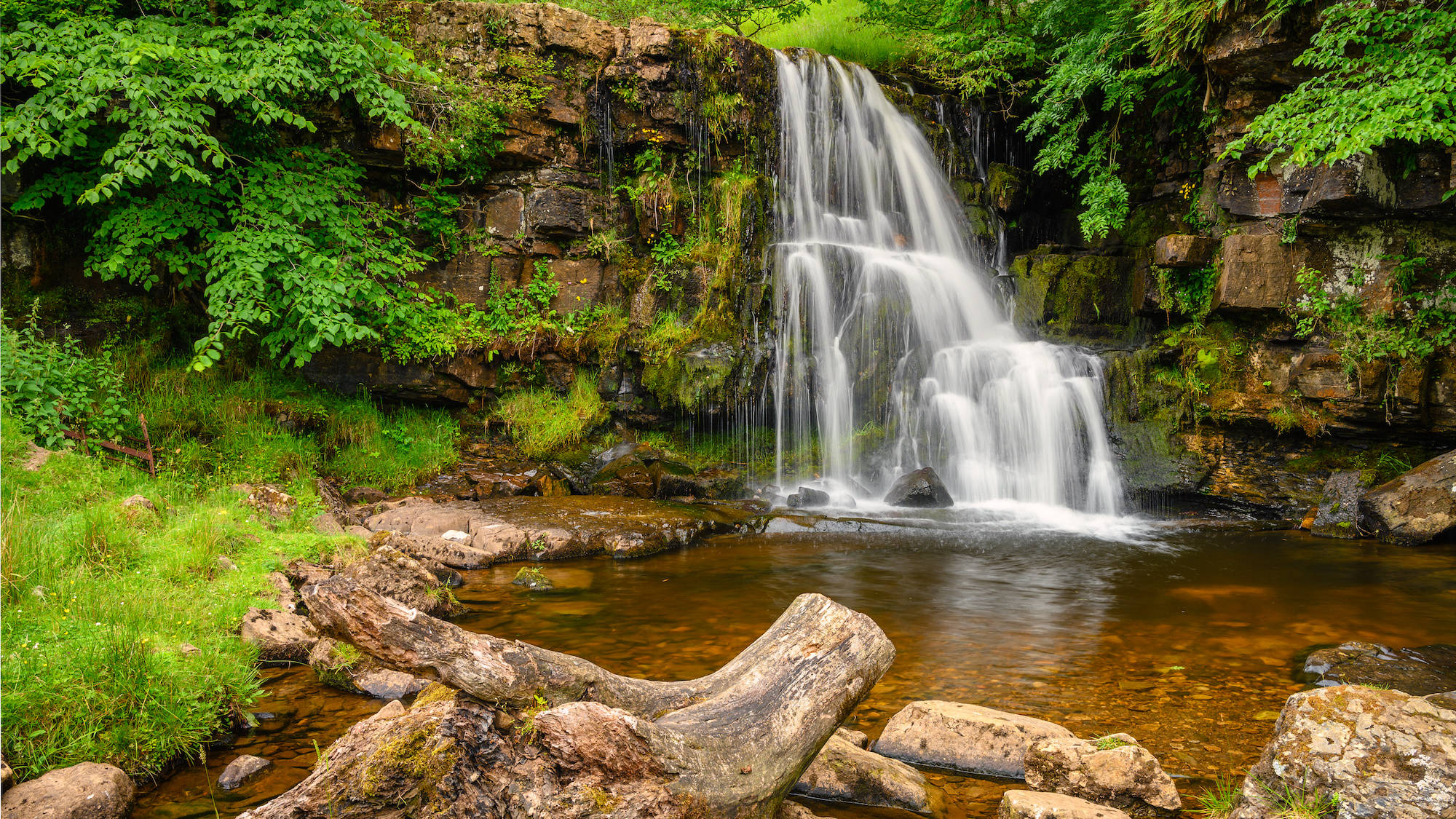 This challenging 8-mile trek across the Ribblehead Valley is one of the best walks in the Yorkshire Dales and there’s so much to discover as you go. Start from Dent Station and make the climb from Lea Yeat Bridge up to the Force Gill Aqueduct where you can see East Gill Force and its 6-metre vertical drop in all its free-flowing glory. There’s the added bonus of completing one of the Yorkshire Three Peaks of Whernside when you get to the top – you can look out across Ingleborough and over to the Ribblehead Viaduct, before you head back to the start and pop into The Station Inn for a few well-deserved post-walk drinks. 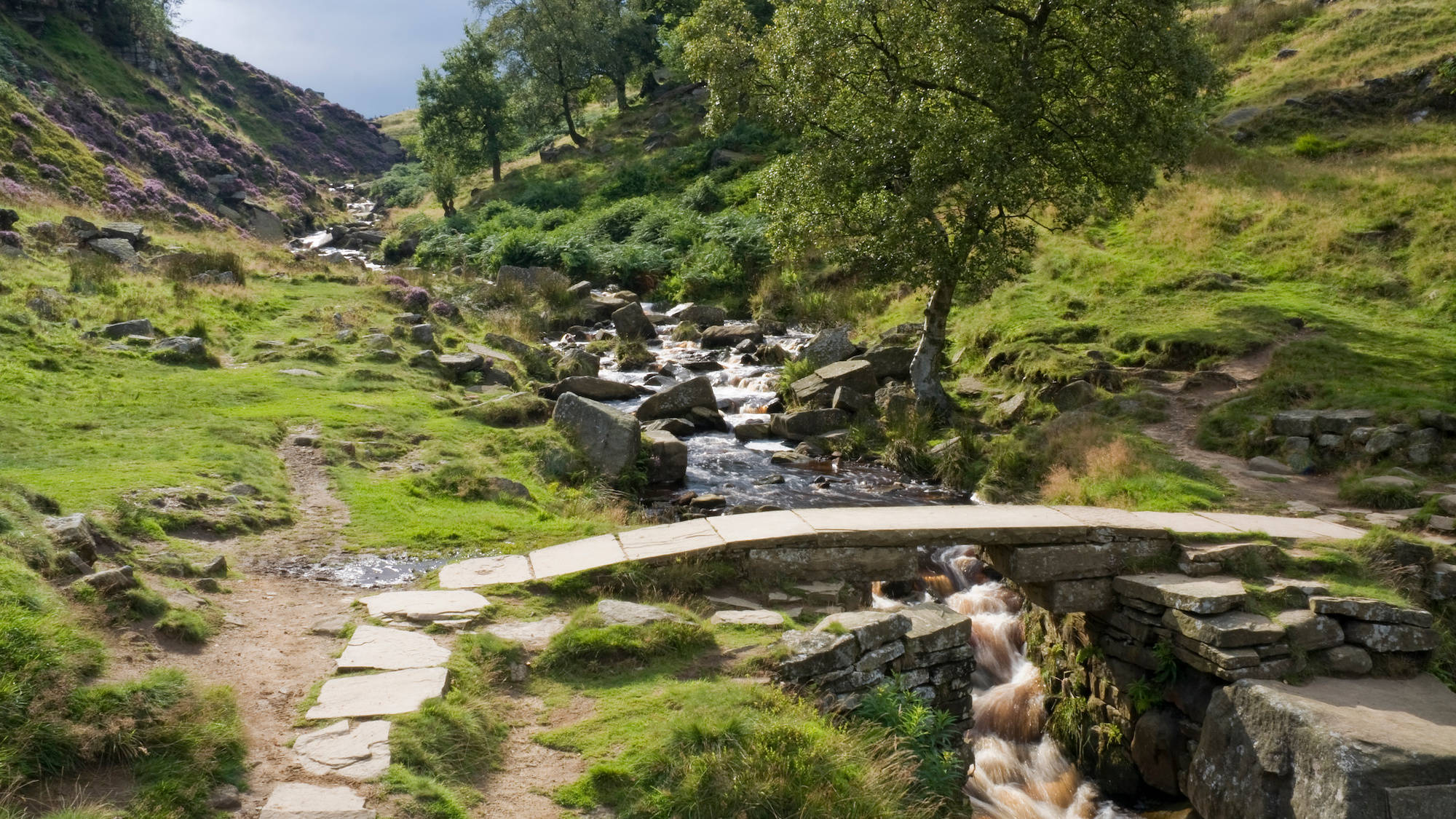 Not only is The Haworth Circular packed full of history, but it’s also one of the best waterfall walks in Yorkshire. From Haworth Moor to Penistone Hill Country Park and Top Withens, you’ll go on a 7-mile journey across Brontë Country to see the places that inspired the work of the famous literary family. But it’s the breathtaking Brontë Waterfall that will be the main attraction. It’s a series of stepped falls that roar downstream from the famous Brontë Chair, which is where Emily would sit and gaze down at the flowing water. On your return, you can take a small detour to visit Lower Laithe Reservoir if you have time. 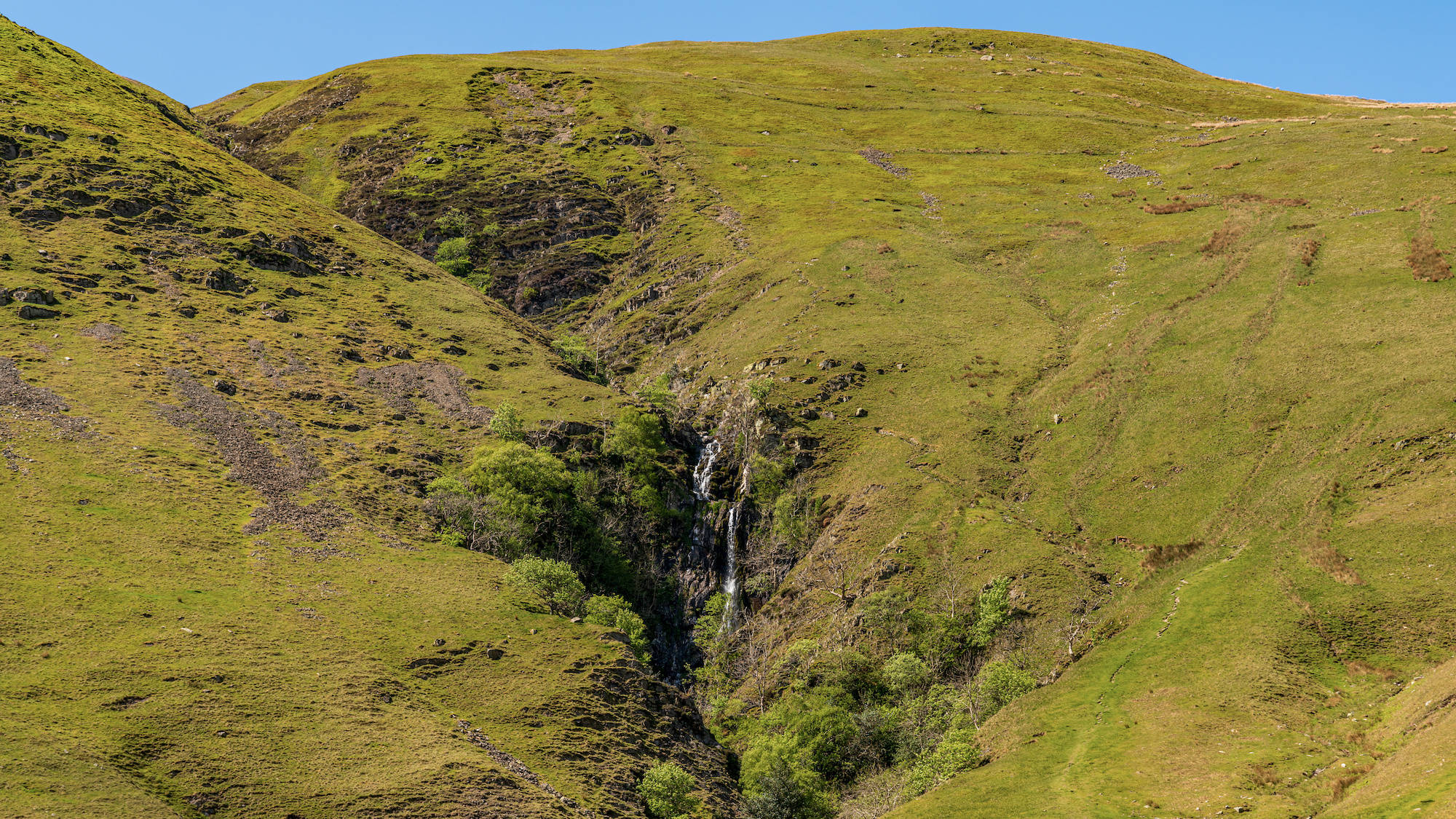 Technically just over the border in Cumbria, but still a part of the Yorkshire Dales National Park, The Howgill Fells is a tough walk, although only 5.9-miles long. It kicks off at Low Haygarth – you have a very steep ascent to get into the fells, then all of a sudden, Cautley Spout will appear from a sheer cliff face in front of you. It’s England’s highest above-ground waterfall. You can see Red Gill Beck flowing 650 feet from a plateau named The Calf, which is where you’ll head next. Admire the show-stopping views across Bowerdale before you head back, popping into The Cross Keys Temperance Inn, an alcohol-free pub where you can enjoy home-cooked grub. 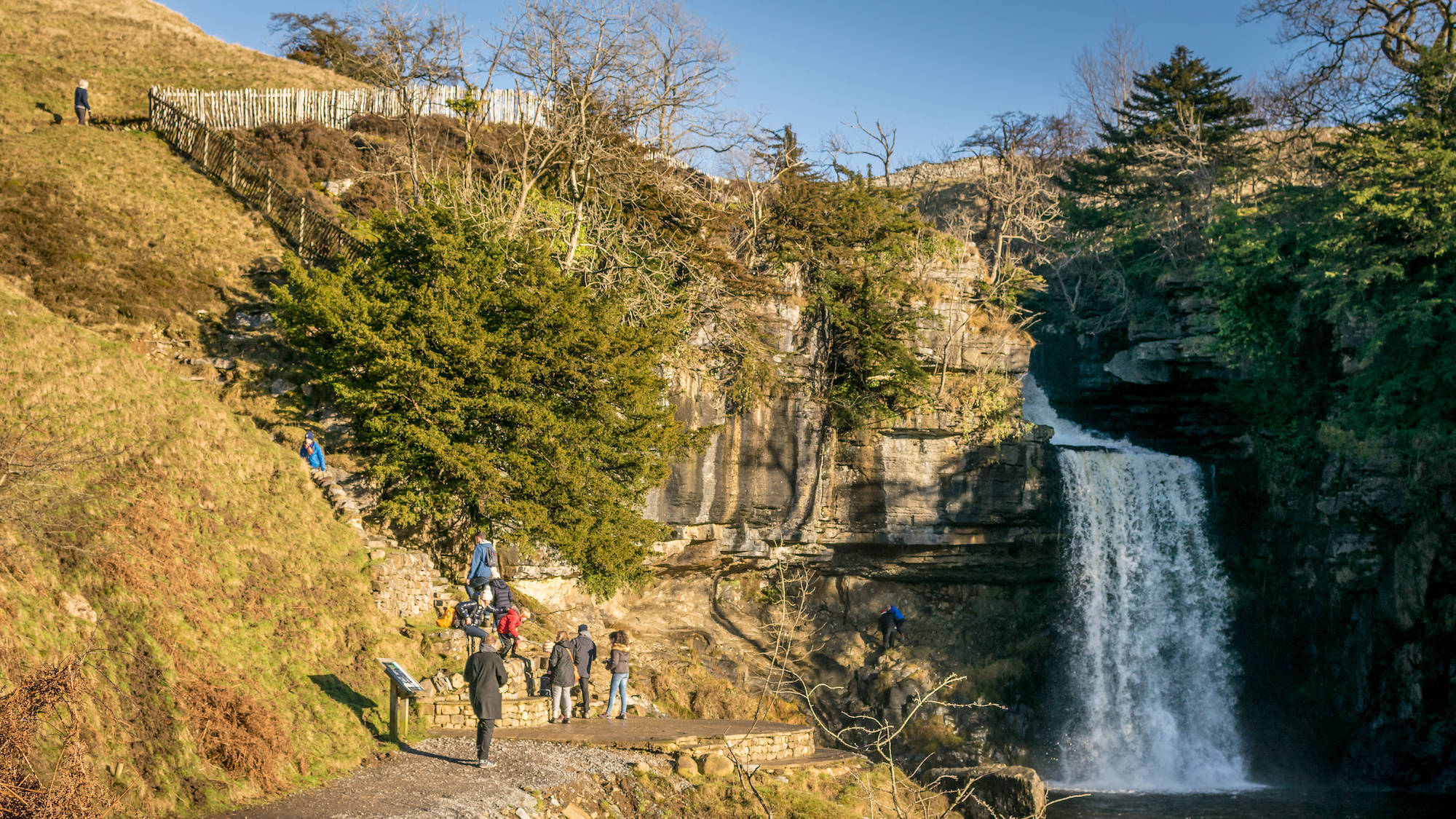 Straddling the Cumbria and Yorkshire border, the Ingleton Waterfalls Trails is one of the best walks anywhere. It’s just 4.3 miles but can be pretty tough-going as you visit six falls, a gorge and a glen. Start at Swilla Glen and head to the River Twiss, which you’ll follow down through an ancient woodland of ash, oak and birch. You’ll soon reach Pecca Falls and Hollybush Spout, the latter of which is home to a refreshment cabin, where you can pick up tasty treats for a picnic overlooking the beautiful Thornton Force. Then it’s time to head back, passing Beezley Falls, Rival Falls and Baxenghyll Gorge as you go. 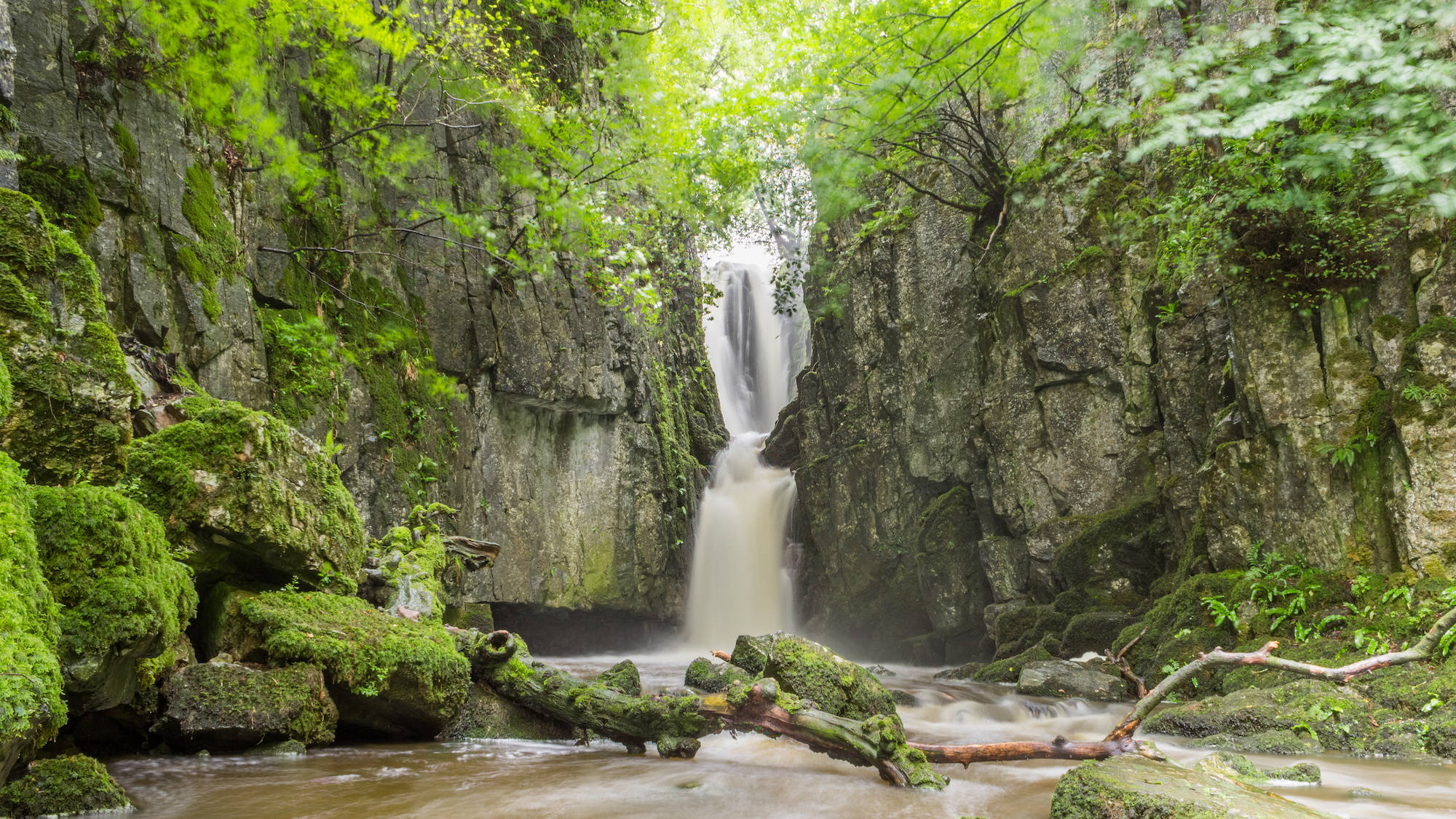 If you’re looking for an easygoing waterfall walk through the Yorkshire Dales, make a beeline for Catrigg Force near Stainforth. This route is just 2.4-miles long and takes you across largely easy terrain. It starts (and ends, thankfully) outside the Craven Heifer pub. From here, you’ll head to the ancient stepping stones that take you across Stainforth Beck. The path on the other side takes you up to Catrigg Force, a breathtaking waterfall hidden in a wooded gorge with a 20-foot drop into a step pool. Once you’ve admired it fully, you can walk back along Winskill Stones and enjoy stunning views over to Pen-y-ghent. 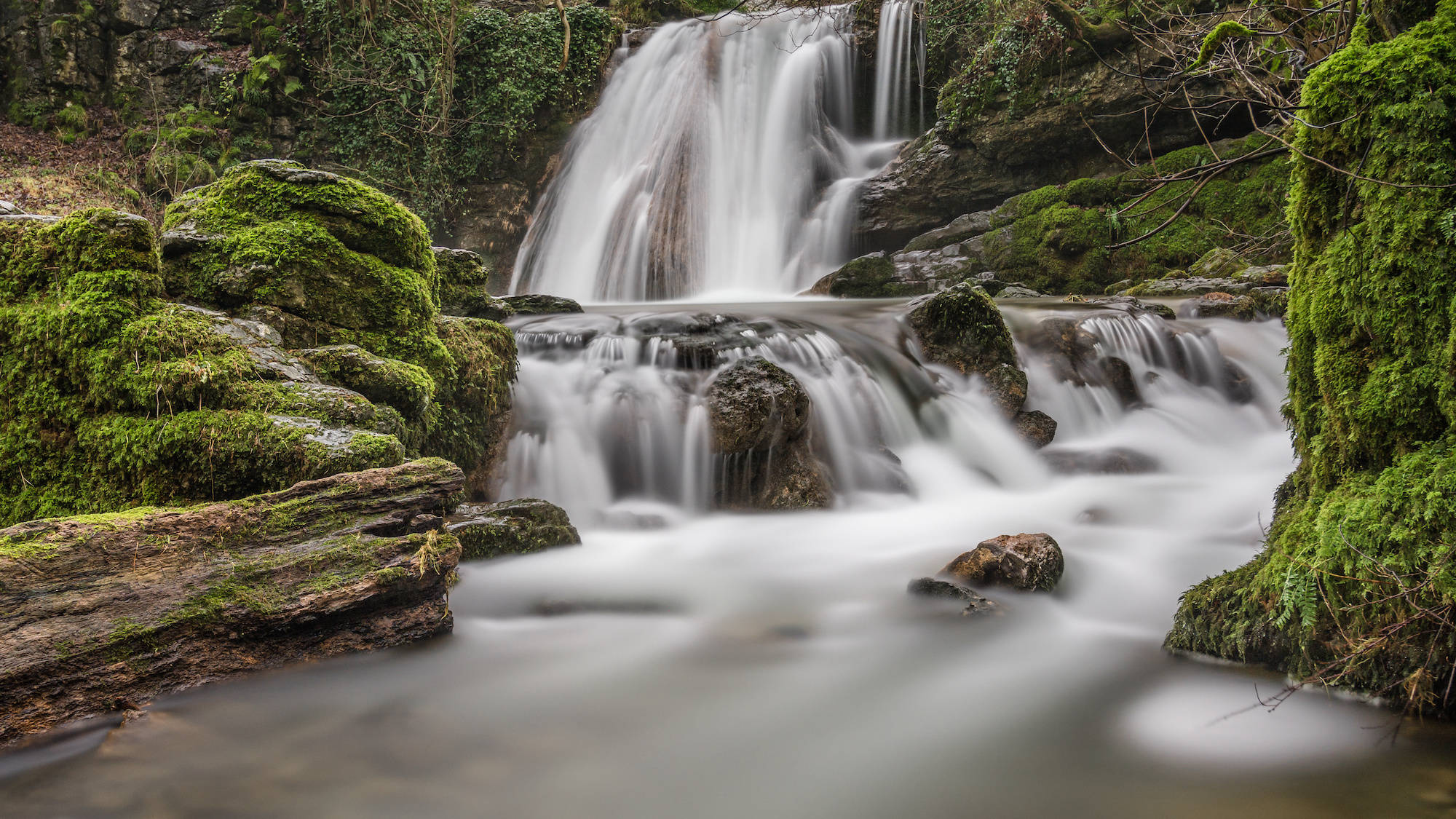 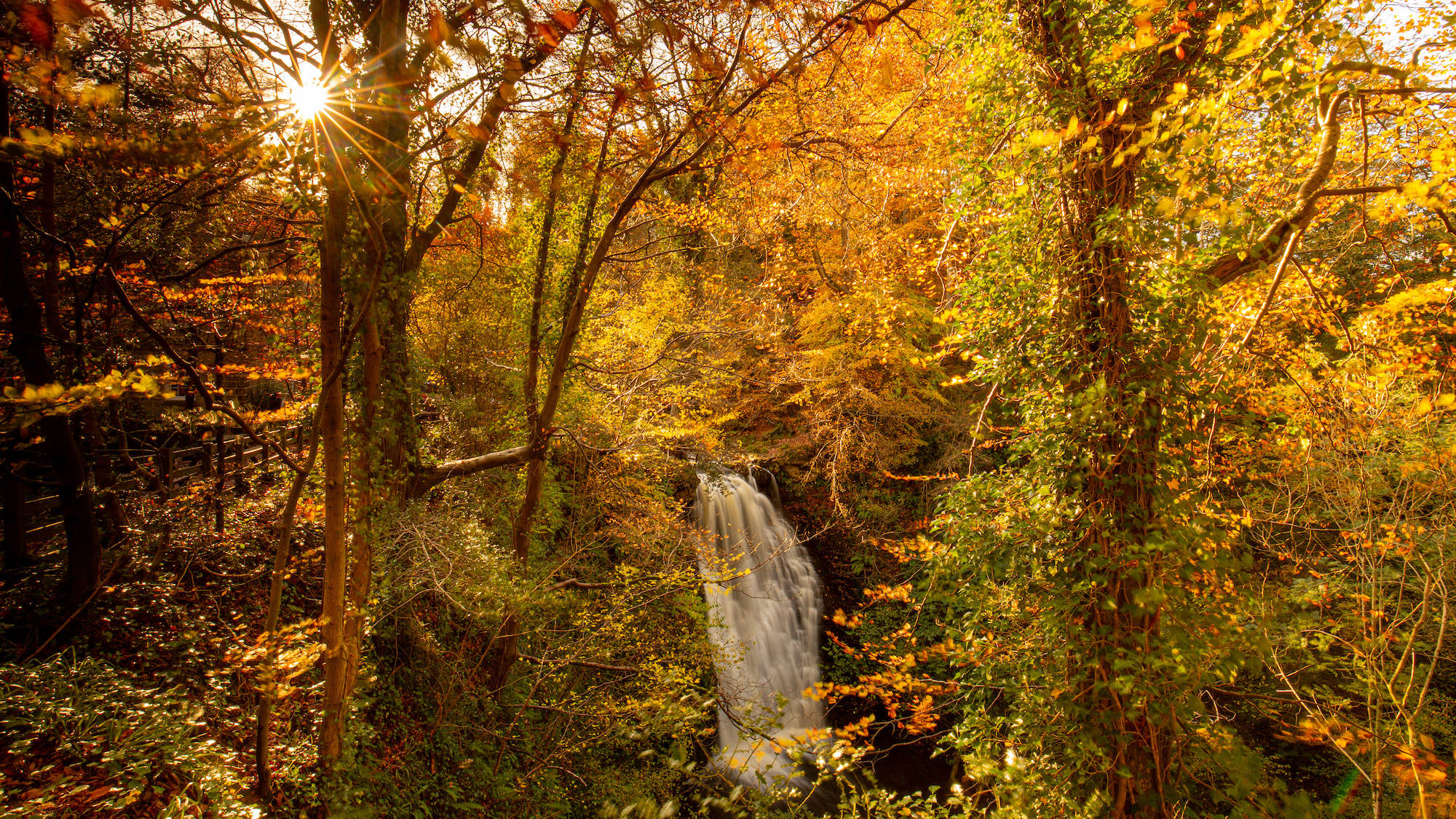 It might only be 2-miles long, but this waterfall walk through the North York Moors National Park is one of the best you can do. You’ll start in the May Beck car park and make your way through the swathes of pretty woodland to reach Midge Hall. It’s an old gamekeeper’s lodge which doubles as the Falling Foss Tea Garden. Take five with a brew, before you nip around back to their very special garden – the incredible Falling Foss waterfall is tucked away behind it. It’s an incredible 30-foot drop that flows into May Beck, which you’ll follow to get back to the start after a rewarding day in nature.

The walk starts at May Beck car park, Sneaton, Whitby, North Yorkshire, YO22 5JE. Check out the route.